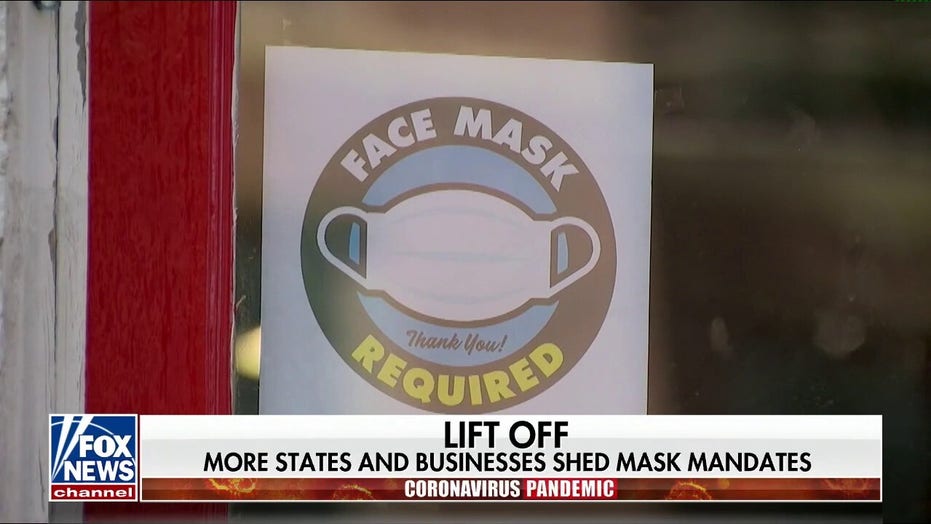 "When you think about two years ago, we were the epicenter of the virus. And two months ago, we became the epicenter again under omicron. Two years of pain, of heartbreak, of uncertainty, of business loss, of schools closing, of conflict inside our households. …," Adams said during a Friday press conference in Times Square. "But I said from the time I was elected, we are not going to let this COVID define us. We are going to define ourselves."

MORE THAN 90% OF AMERICANS CAN GO WITHOUT MASKS: CDC

The COVID-19 positivity rate at New York City schools was 0.18% as of Friday, Adams said.

New York City Mayor Eric Adams speaks during a news conference in which he announced the scaling back of COVID-19 mask and vaccine mandates within the city in New York, Friday, March 4, 2022. (New York City Mayor's Office via AP)

"We've all lost friends, neighbors, loved ones. Nearly 40,000 — each of whom has a name, a family, a story," he said. "Many more of us have experienced severe loneliness and isolation — the effects of which will be felt and experienced for years to come."

More than 77% of all New York City residents are fully vaccinated, including 87% of all adults and "hundreds of thousands" of children, according to Vasan.

Adams also thanked former Mayor Bill de Blasio for his efforts to keep New Yorkers safe during the pandemic, saying he took "a lot of criticism."

"He made some tough calls to put in place mandates. New Yorkers are not used to being told what to do. You know how we are," the new mayor said. "If you tell us to go right, we want to go left just because you told us to."

New York City Mayor Eric Adams speaks during a news conference in which he announced the scaling back of COVID-19 mask and vaccine mandates within the city in New York, Friday, March 4, 2022.  (New York City Mayor's Office via AP)

In response to a question from a reporter asking "how it’s fair that an unvaccinated tourist from Indiana or Oklahoma or wherever, starting Monday, can go to whatever restaurant they want, whereas an unvaccinated firefighter or EMS worker who lost their job doesn’t get their job back," Adams said the rollbacks come from a court ruling.

Those who want to wear masks in schools and indoor settings will still have the option to do so.