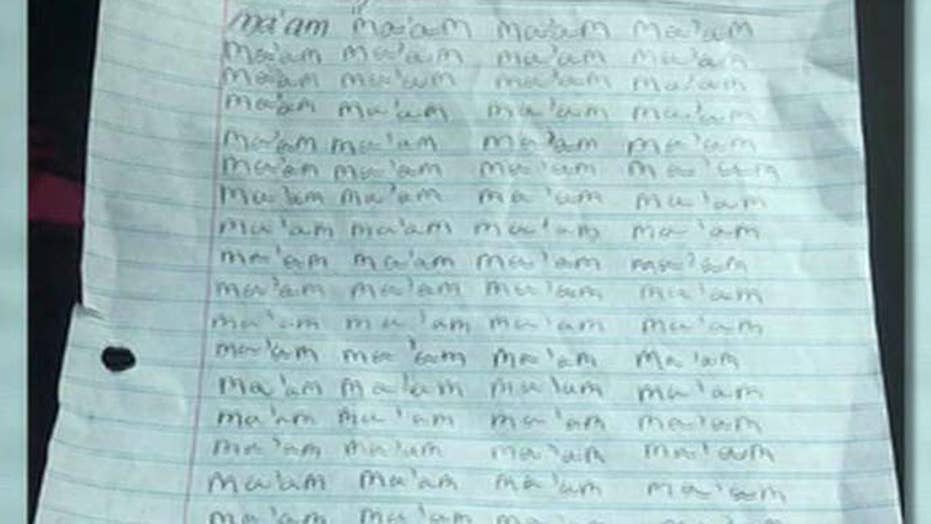 North Carolina parents say their son was forced to write the word 'ma'am' more than 100 times.

The mother of a 10-year-old boy in North Carolina is outraged that her son was recently punished for calling his fifth grade teacher "ma’am.”

“I was in disbelief,” Teretha Wilson, the boy’s mother, told Fox News on Saturday.

Wilson noticed her son, Tamarion, was not himself when she picked him up from the bus stop earlier this week.

“I asked him what was wrong, and he told me he got in trouble for saying 'ma’am' to a teacher. I was confused,” she said.

Inquiring further, Wilson asked her son to give more detail about the incident. That’s when the fifth-grader at North East Carolina Preparatory School in Tarboro, North Carolina, pulled out a piece of lined paper with the word ma’am written dozens of times.

Wilson was shocked, especially when Tamarion told her that his teacher, who has not been formally identified, told him that he was required to return the piece of paper with a parent’s signature.

The young boy also claimed that the teacher threatened to throw something at him during the incident, his mother said.

“He was disappointed because he felt like he had done something wrong,” she said.

The next afternoon, Wilson went to the school to meet with Tamarion’s teacher and the school's principal. With her she brought a separate piece of paper on which her son had written the definition of ma’am. (According to the Oxford Dictionaries, ma’am is defined as “a term of respectful or polite address used for a woman”).

Wilson claims Tamarion’s teacher told her that her son “was getting on her nerve when he called her ma’am" but “couldn’t give me a reason of why that was bad.” The teacher also claimed Tamarion knew that she wasn’t serious when she allegedly threatened to throw something at him, Wilson said.

Tamarion has been placed in a different teacher’s class since the incident occured.

In a statement to ABC 11, an official with the school called the situation a “personnel matter,” which “has been handled appropriately by the K-7 principal.”

6TH-GRADER MIGHT RETURN TO SCHOOL AFTER FLAP OVER HAIRSTYLE

Still, Wilson said she plans to call the school board on Monday to see “if they’re really going to handle it,” though she did not elaborate on what this would entail.

“This is about my child being respectful, then threatened to be hit with something. This isn’t about racism, as some people have made it out to be,” Wilson said, referring to some of the comments on a family member’s Facebook post where she detailed the incident.

Moving forward, Wilson said she has encouraged her son to “always be respectful to [his] elders even if they don’t want to be called ma’am," she said.

“Is this what happens from raising your child in a good way?” she asked.

A spokesperson for North East Carolina Preparatory School did not immediately respond to Fox News' request for comment.