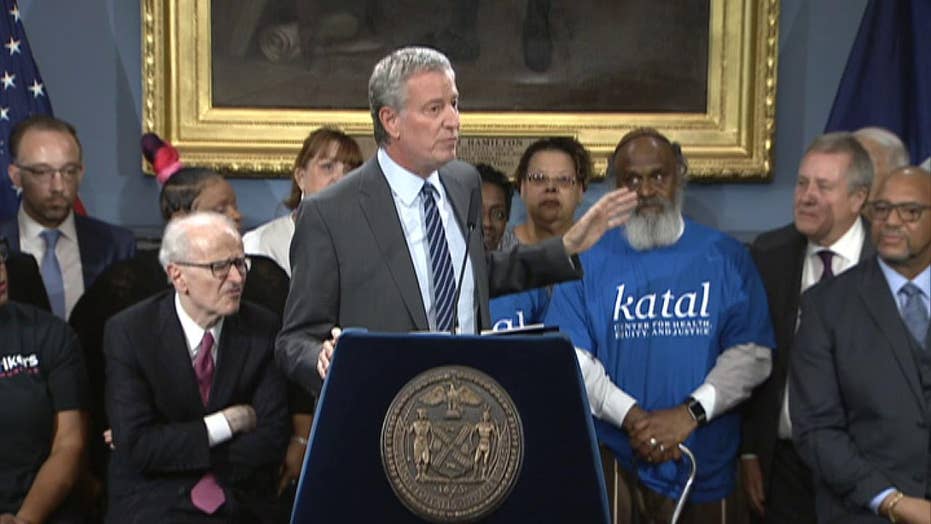 New York lawmakers voted on Thursday to shutter the city's notorious Rikers Island jail complex, which has become synonymous with violence and neglect. The plan calls for moving inmates to smaller jails throughout the city.

The City Council voted 36-13 to replace the complex of 10 jails on an island in the East River, with four smaller more modern facilities, which would be closer to main courthouses in the boroughs of Manhattan, Brooklyn, the Bronx and Queens.

New York City Mayor Bill de Blasio and other Democrats support the plan to shut down Rikers, which mainly houses inmates awaiting trial, and replace it with the smaller jails by 2026. That would end Rikers' decades-long run as one of the world's largest jails.

On Thursday, de Blasio tweeted, “Our city is a big step closer to closing Rikers Island — and ending the era of mass incarceration.”

WHAT IS RIKERS ISLAND?

“This is a plan that is about fairness and compassion. It’s about safety. It’s about valuing every human life.”

The plan has a price tag of more than $8 billion. The operating theory behind the plan: that in an age of falling crime rates, huge jails contribute more to public safety problems than they do to solutions.

"Rikers Island is a symbol of brutality and inhumanity and it is time for us to once and for all close Rikers Island," said City Council Speaker Corey Johnson, a Democrat who shepherded the plan through the governing body. "As a city we must do everything we can to move away from the failed policies of mass incarceration."

Some critics say they don't want new jails, though. Said one councilman who voted no, Carlos Menchaca, who voted no, "There is nothing in the plan that guarantees closing Rikers."

The vote was disrupted by anti-jail activists who threw flyers from the balcony and chanted, "If you build it they will fill it.”

City officials said a significant drop in the jail population has made it possible to close the existing complex.

Supporters of the jail overhaul have said they anticipate New York City’s jail population will keep dropping because of criminal justice reforms and several district attorneys in the city saying they are no longer prosecuting small-time marijuana possession cases.

Also, police officers have been encouraged to write tickets for minor offenses instead of bringing people to jail.

On the other hand, critics of the plan have said fewer cells may lead to more violent criminals on city streets.

The plan has also received some resistance from residents of neighborhoods surrounding the four new jail sites.

City Council leaders announced Tuesday that they would decrease the heights of the planned jails to win support. A prison skyscraper planned for Lower Manhattan was cut from 45 to 29 stories and City Council member Margaret Chin, a Democrat who represents the area, said the shorter jail tower "will no longer be out of scale with the neighborhood."

Also, a proposed Brooklyn jail went from 39 to 29 stories.

Rikers Island has housed jail inmates since the 1930s. In the 1980s and early 1990s, Rikers saw hundreds of stabbings each year and in a 2014 Associated Press investigation dozens of inmate deaths were detailed, including that of a homeless Marine vet who died in a hot cell.