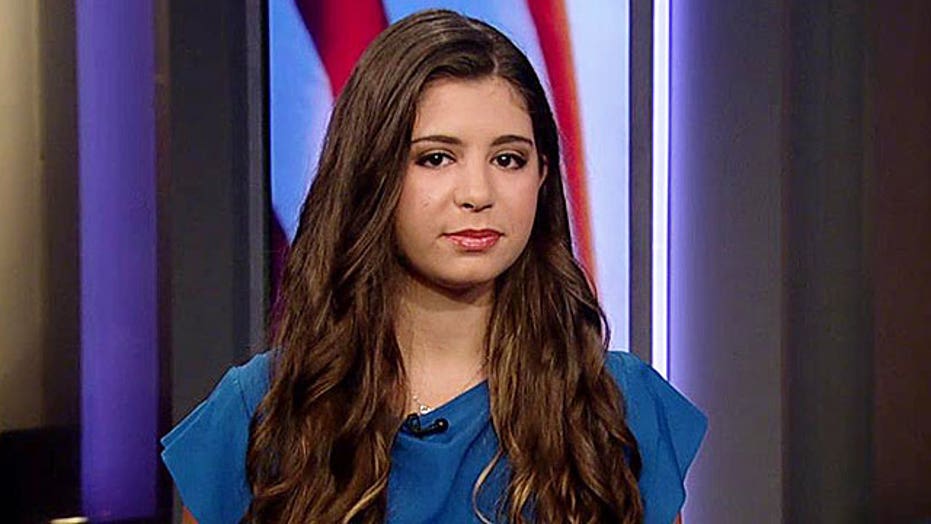 Teen fighting for right to recite 'under God' in Pledge

A New Jersey high school senior has won her case to keep "one nation under God" in the Pledge of Allegiance, defeating atheist attacks that sought to strike the language from the pledge.

Samantha Jones, a senior at Highland Regional High School, declared victory Friday in protecting what she has described as the right of her fellow students to continue reciting the Pledge of Allegiance in its entirety. After hearing the teen and her family's case, a state judge dismiss the latest efforts by the American Humanist Association to remove "under God" from the Pledge.

The legal battle first began when an unnamed New Jersey family from Monmouth County, identified in court papers as John and Jane Doe and their child, sued the Matawan-Aberdeen Regional School District in February 2014, alleging the phrase "under God" in the pledge is discriminatory. The case was filed by the American Humanist Association, which claimed the recitation of the pledge violates Article 1 of the state's constitution.

Jones, who was attending another school, fought back, telling Fox News last November that the phrase "acknowledges that our rights don’t come from the government but from a higher power, so they can’t take away the rights."

She described America as a country of many beliefs and claimed all of those beliefs – including those of atheists – are protected by "one nation under God."

"I don’t think that it’s as much about religion as it is about our rights. Everyone has the right to remain silent but they don’t have the right to silence everybody else," she told Fox News.

After the school district and Jones won their case, she said in a statement released Friday that "I'm so grateful the court decided that kids like me shouldn't be silenced just because some people object to timeless American values."

"Ever since I was little, I've recited the Pledge of Allegiance because it sums up the values that make our country great. The phrase 'under God' protects all Americans-including atheists-because it reminds the government that it can't take away basic human rights because it didn't create them," she said.

Jones and her family were represented by the Becket Fund for Religious Liberty. Historic defenders of the Pledge like the Knights of Columbus, the world's largest Catholic fraternal organization, and the American Legion also intervened in the case.

"The message today is loud and clear: "God" is not a dirty word," Eric Rassbach, Deputy General Counsel for the Becket Fund for Religious Liberty, also said in a statement Friday. "The Pledge of Allegiance isn't a prayer, and reciting it doesn't magically create an official state religion."

"The Pledge-in the tradition of Washington's Farewell Address or Lincoln's Gettysburg Address-is not a prayer to God, but a statement about who we are as a nation. Dissenters have every right to sit out the Pledge, but they can't silence everyone else," Rassbach said.

David Niose, an attorney for the American Humanist Association’s Appignani Humanist Legal Center, had argued that public schools should not "engage in an exercise that tells students that patriotism is tied to a belief in God."

"Such a daily exercise portrays atheist and humanist children as second-class citizens, and certainly contributes to anti-atheist prejudices," Niose claimed.

The Matawan-Aberdeen Regional School District doesn't require that students say the Pledge of Allegiance. The Supreme Court ruled in 1943 that school children could not be forced to recite the pledge.

State Superior Court Judge David Bauman said during arguments in November that there wasn't any evidence the student in question had been "bullied, ostracized or in any way mistreated." But Bauman also noted during his questioning of district attorney David Rubin that district policy requires parents whose children don't say the pledge to furnish an explanation in writing.

At the time, Rubin said he wasn't aware of any cases in which parents had refused to supply an explanation and didn't know what the ramifications would be if they didn't. He accused the plaintiffs of filing a lawsuit claiming the pledge violates laws against the official establishment of religion "masquerading as an equal protection case."

School district officials had claimed they're simply following a state law requiring schools to have a daily recitation of the pledge. In a court filing, the district wrote that the plaintiffs can't claim a violation of equal protection laws because all students are treated equally by not having to recite the pledge.