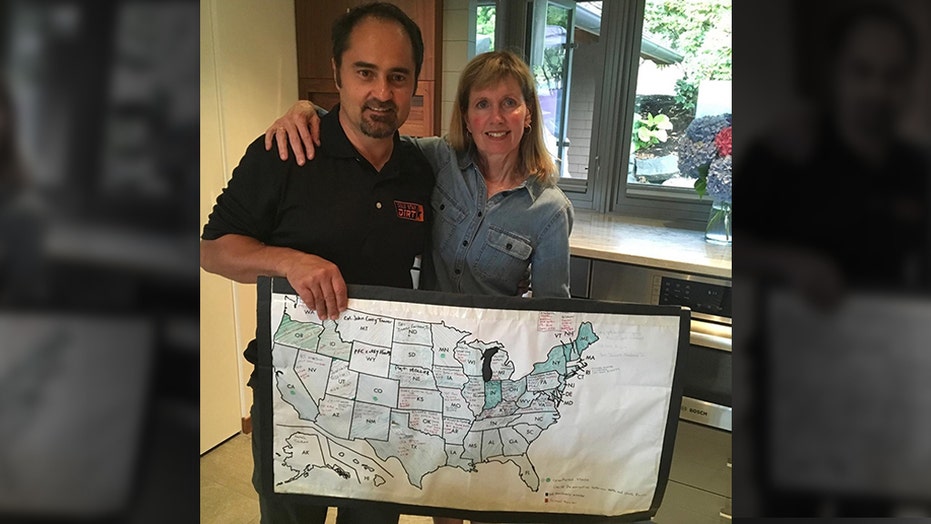 When U.S. Navy veteran Keith Sherman began his journey through all 50 states to interview Gold Star family members, he had no idea how much the trek would alter his life's trajectory.

"I started with the thought that I needed to complete states and shade in this map," he told Fox News this week. "Now even saying it sounds naive to me."

Sherman completed his final interview on Friday morning outside Boston. His goal was always to recognize military heroism by telling the stories of fallen service members through the voices of Gold Star families, those who have lost loved ones in the armed forces.

But he quickly realized that "it was not about racking up states at all. It was about taking this emotional journey and connecting on a human level with these families -- looking the family member in the eye as they are pouring out their emotions in front of me about the single hardest moment in their life.

"To look away would be disingenuous and not in keeping with my own self convictions of why I took the journey in the first place.

"In that very moment, looking in their eyes, the wonder of the human condition presented itself to me; it is beautiful and tragic, all wrapped up in complexity. After witnessing it, I wouldn’t want to miss it, ever," Sherman explained. "I have this beautiful new perspective on my life now. Metamorphosis is an understatement, to say the least."

Navy veteran Keith Sherman visited each of the 50 states to collect stories from Gold Star families. (Courtesy of Keith Sherman)

For the past year and two months, Sherman has traveled around the nation documenting stories of Gold Star families from every state. He lived on the road, in a tent atop his car, for 428 days, logging more than 50,000 miles while gathering those accounts from the families' loved ones.

While his project started humbly, Gold Star Dirt became a nonprofit last August. Sherman has collected more than 160 hours of interviews chronicling the lives of America's fallen heroes and the kin who mourn that loss.

MAN DRIVES TRACTOR 5,600 MILES AROUND US TO SUPPORT WOUNDED VETS

There were literal and figurative roadblocks along the way.

Thinking about the project in its entirety sometimes became "too much to comprehend," Sherman said. "I needed to change my method of thinking about the journey. Instead of the enormity of the entire project and its execution staring at me in the face, I needed to break it down to smaller portions and only think about it in state-to-state terms."

Interviews weren't always lined up right away, and there were times when Sherman ran out of money for his trip, which he financed through his military retirement pay and limited donations.

"The times where I did receive donations, and the Gold Star families let me stay with them in the very homes that the fallen heroes grew up in and fed me, were keys to my success. It was very humbling and emotional for me, and still is."

Sam and Keno Day talked about their son IT1 (IDW/EXW/FPJ) Jared Day, who was killed in Wardak Province, Afghanistan, on a helicopter call-signed Extortion 17. He was killed with 38 others, making it the single deadliest day for the Special Operations community since World War II. (Keith Sherman)

His goal also kept him motivated.

The Library of Congress heard about Gold Star Dirt and reached out to see if Sherman knew about the Gold Star Family Voice Act, which expanded the Veterans History Project mandate to audio and video first-person interviews.

The Library of Congress gave Sherman's mission even more purpose, he said -- they were looking for the stories he wanted to memorialize.

There will be a donation ceremony of the stories on Nov. 1 at 10 a.m. Every Gold Star family member who has participated, as well as elected officials and others, is invited to see the stories be donated into the Library of Congress.

"It’s the largest-ever donation of Gold Star stories to the [Library of Congress] by a single source," he said.  "A saying that kept me grounded was one that a mentor of mine said from my days in the Navy: 'Don’t break your arm patting yourself on the back.' That put me right back where I needed to be and kept me humble."

Sherman doesn't have any immediate plans for another epic Gold Star Dirt project, but it's so much more than just collecting stories, he said.

"In the end, what you take away from it is connecting on a human level with amazing people and sharing in their life, pain and healing; it is an almost indescribable experience," he said. "I challenge others to take this on. Sadly, there are still so many stories that need to be collected and in the end, this collection is just a fraction of them."

He could not have completed the project without the help of his producer Kristine Flores, who works at a TV station in San Jose, Calif., as well as the U.S. Army Survivor Outreach Services (SOS) Coordinators who helped arrange the interviews, Sherman said.

He now has dozens of stories and memories of heroes across America. There are too many to focus on just one, Sherman said, but in Alaska, he climbed Gold Star Peak, actually named in honor of Gold Star families.

"Families come from all over the country in order to climb this peak and honor their fallen hero, and affix dog tags to the monument at the top bearing their loved one’s name," he said. "I even saw the tag of a friend of mine that I had served with, PO1 Anthony Lembo, at the top, placed there by his widow, Stephanie Lembo, only a few short months before."

"My goal from the beginning was to climb Gold Star Peak and read aloud the names of all of the fallen heroes whose stories I had documented. I carried every story with me up that mountainside, every tear that has been shed in front of me, every tear that I had shed in a family’s home -- every tear that I had shed after leaving a family’s home post-interview and pulling over just two miles down the road to try to regain my composure, being unable to drive through the emotion," Sherman recalled. "This journey for me has been a cathartic one."

He climbed the mountain with the Woozencraft family. Tom Woozencraft, a Gold Star dad, married a woman who was also a Gold Star parent, Sherman explained. Their two grandchildren went on the hike, too. The family climbed to honor their two fallen heroes, Sgt. Joel Lewis and Cpl. Eric Woozencraft.

"All week it had been raining and the mountains had not allowed anyone to climb them. That day, for reasons that I cannot explain, the weather stopped and the mountain shown through the clouds, allowing for us to climb," Sherman said. "As I looked over the edge thinking of the fallen and their families, a quote from [former] President Obama rang in my ears: 'Our nation owes a debt to its fallen heroes that we can never fully repay, but we can honor their sacrifice.'

"This whole journey has been about that."