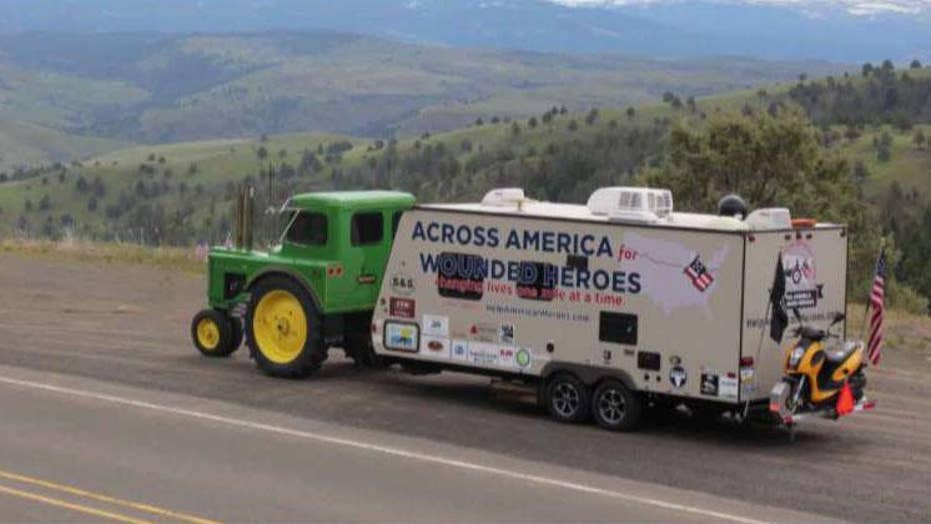 ​​​​​Ivan Stoltzfus is driving his John Deere tractor across country for the troops.

Florida resident C. Ivan Stoltzfus on Saturday completed a 5,600-mile journey around the country driving his 1948 John Deere Model A tractor to raise awareness for wounded veterans and the nonprofit Operation Second Chance, a group committed to serving injured and ill veterans.

"The tractor draws attention. It's a weird-looking thing going down the road," Stoltzfus told Fox News on Tuesday.

The goal of his five-month trip? To encourage veterans, law enforcement and first responders that "they're not forgotten," Stoltzfus said. "There's one percent of us who protect the 99 percent of us. I feel we have an obligation to help them so we can [continue to] be free."

While he has no personal connections to the military, Stoltzfus, 72, said he "always felt like I took my freedom for granted. I see America as one big family, and family members help each other. We have a responsibility to help those who are willing to sacrifice for our freedom."

Stoltzfus started in Maryland in May and made his way west to Montana before heading south through Wyoming, Colorado and Texas, later making his way back east to end his journey in Sarasota, Fla., over the weekend.

Stoltzfus traveled about 15 miles per hour through back roads and country towns. He camped in his trailer that advertised Operation Second Chance and Stoltzfus' mission: "Across America for Wounded Heroes."

"It's helping heroes move ahead one mile at a time," Stoltzfus explained.

This was Stoltzfus' third and final tractor journey across or around the country. He has accumulated more than 18,000 miles and helped raise approximately $260,000 through his travels for Operation Second Chance.

"This trip was about meeting veterans, police and fire [personnel], and letting them share their stories," Stoltzfus explained. "I probably have 300 names, numbers and emails of people I met. I just love meeting people and sharing with them. There's such a need out there.

"I didn't realize the pain [our veterans] are struggling with," he said. "We have a responsibility to help them."

C. Ivan Stoltzfus was welcomed upon arriving home from his tractor journey on Saturday in Florida. (Courtesy of Operation Second Chance)

While Stoltzfus claims "all I did was drive the tractor," he and the John Deere have been a beacon of hope for many veterans, law enforcement members and first responders throughout the country. It became known as "Johnabilt," as it is a John Deere truck with a Peterbilt 359 bed, he said.

"That was so touching," Stoltzfus said.

On this third trip, he met a policeman in Nebraska who came to his campsite and said he struggled with PTSD, or post-traumatic stress disorder.

"There were different accidents that he didn't quite get to in time where children had [died]," Stoltzfus said.

Then there was a young man in Indiana who came running to meet Stoltzfus, tears in his eyes, and said how he really needed help.

"He was struggling," Stoltzfus recalled. "I shared with him there for quite a while."

Whether at gas stations or in parking lots, Stoltzfus met hundreds of people, many of whom gave him pictures of their loved ones who had been killed. Stoltzfus kept them so he could remember their stories.

"I was humbled," he said. "I met incredible people." 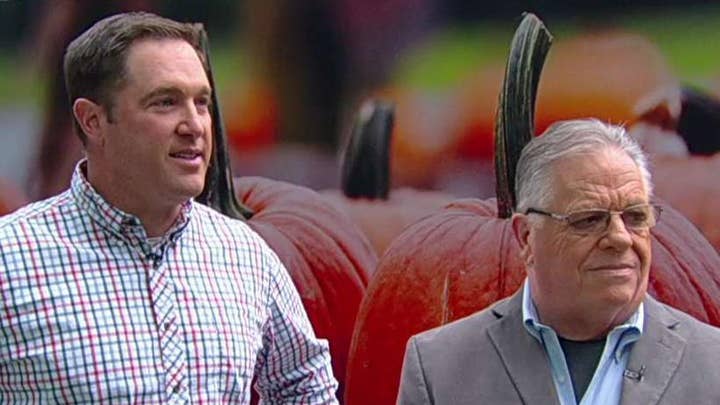 He has worked with Operation Second Chance for one and a half years, and he will continue to do so -- just not driving his tractor, Stoltzfus said.

He is a semi-retired auctioneer and real estate broker who retired from three decades of farming in 2000. Stoltzfus said he "will always continue" to work with the organization and support the nation's veterans.

“Operation Second Chance was deeply moved and humbled to team up with Ivan on his third and final journey around the United States, as he traveled the nation bringing awareness of the many sacrifices made by our Armed Forces and first responders," founder and CEO Cindy McGrew told Fox News. "Ivan is the salt of the earth, and we were proud to be his ground support on his journey."

There were "lots of laughs and tears along the way," McGrew said, and Stoltzfus' "courage and dedication to our country's veterans and first responders is so very admirable."

"He will always be a part of our team," she added.

Stoltzfus said his journey was truly a "team effort."

"Right down to the prayers and support for safety, I really appreciated everybody's support," he said.