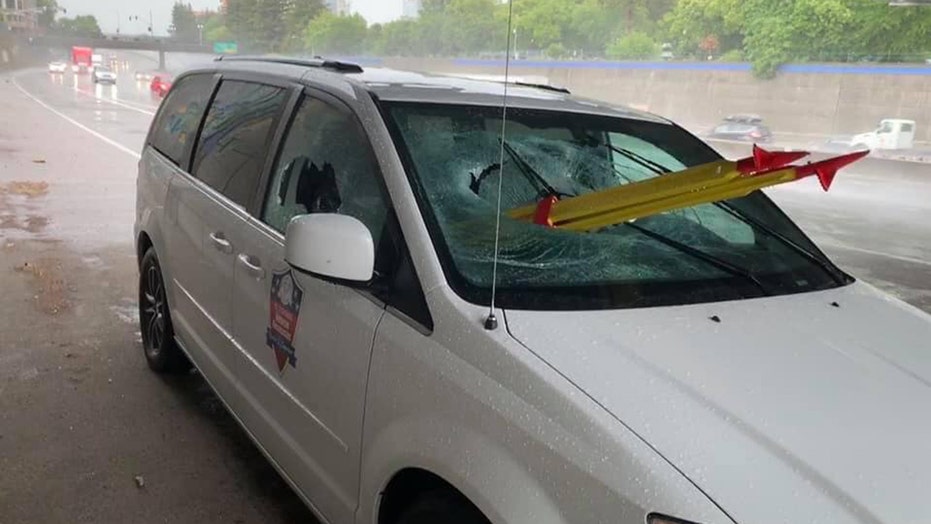 A military veteran was injured Thursday when a surveyor’s tripod hurled from a California overpass crashed through a van windshield.

Police made an arrest in connection with the freak incident in Sacramento, which involved a van belonging to Military Family Support Group, a veteran’s charity.

The driver of the van told KCRA-TV that he was on I-5 when he saw “a yellow something” out of the corner of his eye.

A homeless man has been accused of hurling a stolen surveyor's tripod from an overpass, smashing a van's windshield and injuring a military veteran. (California Highway Patrol)

"When it hit the windshield, then I ducked and kind of bent over, a little late of course,” Tim Page said. “And when I straightened up and looked over, that's when I saw this through the windshield."

The vet who was injured was Page’s passenger. He suffered broken ribs, stitches and a collapsed lung.

“Scary to think that just a few inches to the left could mean the difference between life and death,” Military Family Support Group said on Facebook.

CHP accused Matthew Thompson, a 32-year-old homeless man, of stealing the tripod and said he is facing attempted murder charges.

Thompson was initially charged with resisting a peace officer and an outstanding warrant, the station reported.