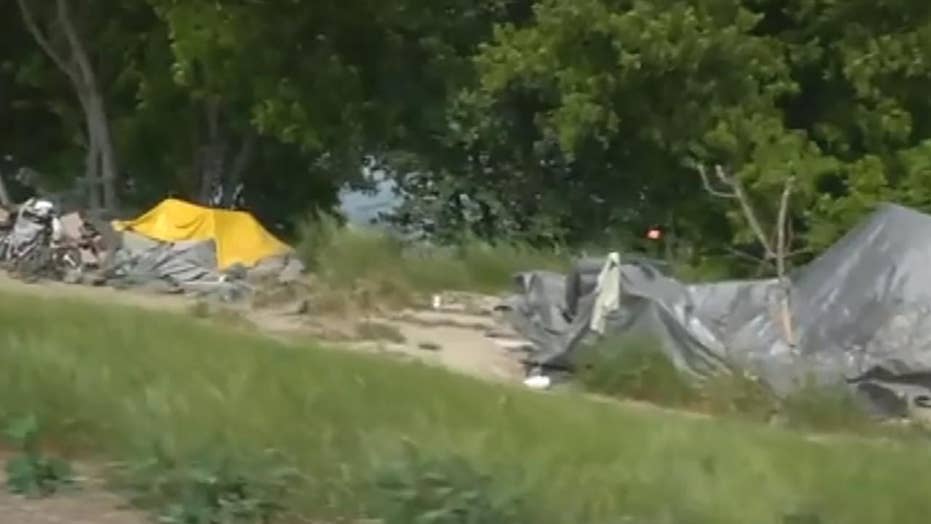 Thousands of residents in Northern California may be threatened by flooding in the future by levees weakened not by weather but people living on them.

Homeless encampments that have popped up along the sides of levees in Sacramento and San Joaquin counties are creating damage to the flood control structures, as some residents dig into the slope to create a flat surface to put their tents up.

But those cuts into the earthen levees may ultimately end up compromising the structural integrity of the mounds when floodwaters rise, according to Tim Kerr, the general manager for the American River Flood Control District.

"You can have wind and wave action battering into the cut and that could weaken the soil and cause chunks of the levee to slip away," Kerr told FOX40.

BAY AREA HAS THIRD-LARGEST HOMELESS POPULATION IN US, REPORT FINDS

Kevin King, the general manager for Reclamation District 1000 which manages levees along the Sacramento River, told CBS13 that holes are often hard to spot because of all the trash and other debris associated with the encampments.

“There may be things going on underneath the tarps and tents that are covered up that we just can’t monitor," King said.

Officials are concerned that homeless encampments in Northern California are causing damage to levees. (FOX40)

Sacramento City Councilman Jeff Harris, whose district includes areas near the river, said the damage can be quite severe.

"In one spot a guy had actually cut into the levee enough like a cave," Harris told FOX40. "That could cause a breach. There’s no doubt about it, this is dangerous."

TOMI LAHREN: EVEN A SEX PISTOL AGREES CALIFORNIA IS NOW THE HOMELESS ENCAMPMENT OF THE WEST

Harris has since asked the American River Flood Control District and Reclamation District 1000 to provide a list of some of the largest and troublesome encampments to report to law enforcement.

Sacramento City Councilman Jeff Harris told FOX40 that in once instance, a man dug into a levee "enough like a cave." (FOX40)

The councilman told FOX40 he hopes that educating those living atop the levees of the problems they are potentially causing will motivate them to leave.

"When they realize that they’re being displaced because they’re causing harm to our levees the word will get out," Harris said.

California still leads the nation in the number of estimated homeless individuals with an estimated total of over 109,000 in 2018, according to a Department of Housing and Urban Development report from December. Just over 68 percent of the homeless population in California is also categorized as unsheltered.

Homeless advocate Paula Lomazzi told KCRA-TV that people typically seek hidden spots near the river because they are less likely to be bothered or ultimately moved by authorities.

With so many people priced out of housing, wouldn't local leaders want to stop the flow of new arrivals to get prices under control?

"I think a short-term solution is finding a place for them to stay,” Lomazzi said.

The Reclamation District 1000 board voted Friday to send letters to several law enforcement agencies asking for their help solving the problem and the Sacramento City Council plans to have a hearing about the problem about the encampments in the levee districts.

But residents who live near the levees say they still are concerned over the damage.

“If the levees go, my house would probably be underwater,” Scott Garrison told CBS13.