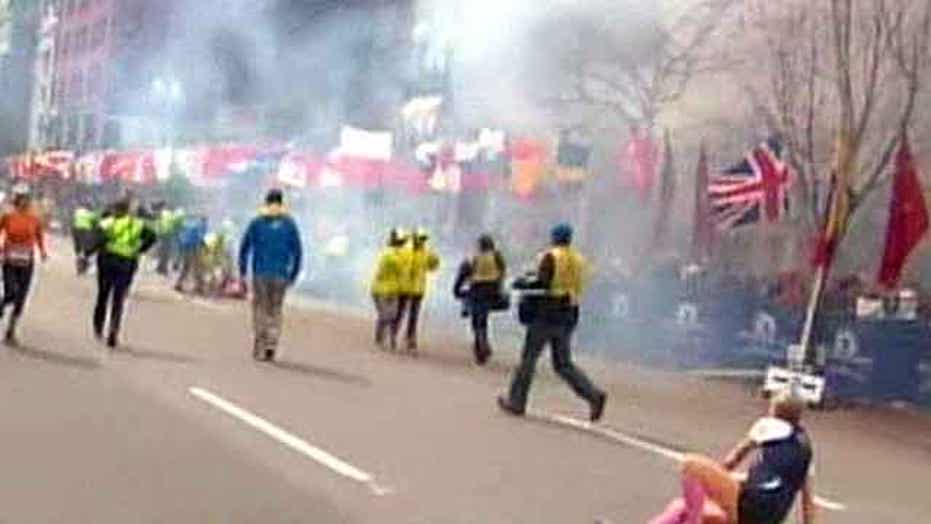 Breaking down the Boston bombing timeline

When the alleged Boston Marathon bomber was told by one of his friends that he resembled one of the suspects in the widely released surveillance video, he sent a chilling response: “Lol, you better not text me,” an affidavit unsealed Wednesday said.

The brief interaction between bombing suspect Dzhokhar Tsarnaev and his friend Dias Kadyrbayev occurred three days after the April 15 bombing, the affidavit said. Kadyrbayev was among three others charged Wednesday for allegedly conspiring to get rid of Dzhokhar Tsarnaev’s incriminating backpack filled with gutted fireworks.

He also texted Kadyrbayev to say, "Come to my room and take whatever you want," according to the affidavit.

"Kadyrbayev knew when he saw the empty fireworks that Tsarnaev was involved in the marathon bombing," the affidavit reads. "Kadyrbayev decided to remove the backpack from the room in order to help his friend Tsarnaev avoid trouble."

The exchange came just a few hours before the Tsarnaev brothers would carjack a Chinese immigrant, murder an MIT police officer and engage in a wild shootout with police through the streets of Cambridge and Watertown, police say. Tamerlan Tsarnaev died April 19, after a shootout hours after authorities showed the brothers on surveillance video and named them as suspects.

Documents based on interviews with the young men reveal Dzhokhar Tsarnaev allegedly dropped sinister hints before the attack, telling his friends a month before that he had learned how to make a bomb. However, it wasn’t until the FBI released a surveillance photo of the suspects that the friends realized Tsarnaev may have been involved.

The FBI claims this prompted Dias Kadyrbayev and Azamat Tazhayakova both 19-year-old natives of Kazakhstan and friends of Tsarnaev at UMass-Dartmouth, to go to Tsarnaev's dorm and take a laptop, the backpack and some Vaseline that may have been used in making the deadly pressure cooker bombs that killed three and injured more than 200 at the race. Police believe the bombs were packed with shrapnel and gunpowder removed from fireworks.

The affidavit filed in support of a complaint said Kadyrbayev was the one who carried out the disposal of the backpack after the three saw the fireworks that had been hollowed out and emptied of gunpowder.

Although the three new suspects initially appear to have stonewalled authorities, Phillipos came clean in a fourth interview, conducted April 26. He confessed that the three took the backpack out of their friend's dorm room, according to the affidavit. Phillipos allegedly told investigators that the two others "started to freak out" after seeing Tsarnaev identified on television.

Robert Stahl, an attorney representing Kadyrbayev, said his client denies the allegations and added that Kadyrbayev assisted authorities in their investigation.

"He is just as shocked and horrified by the violence that took place in Boston as the rest of the community is," Stahl said. "He did not have anything to do with it."

Prior to the latest development, authorities had named only the brothers as suspects in the bombing at the finish line of the world-famous race.

Kadyrbayev's attorney, Robert Stahl, says his client will be transported to the federal courthouse later Wednesday to appear on new criminal charges. On Friday, Yerlan Kubashev with the Consulate General for Kazakhstan in New York confirmed in a statement to Fox News that the consulate is helping the young men with legal representation. Both Kadyrbayev and Tazhayakov will plea not guilty, according to their attorneys.

Kubashev said the two men are "shocked at the bombings," and "they express sorrow to the bombing victims and their families."

Dzhokhar Tsarnaev, 19, is in a prison hospital after being wounded in the shootout with police as he and his brother made their getaway attempt. He is charged with using a weapon of mass destruction to kill, a crime that carries a potential death sentence.

Authorities have searched the Rhode Island home of the parents of Katherine Russell, Tamerlan Tsarnaev's widow.

Fox News' Pamela Browne and The Associated Press contributed to this report.