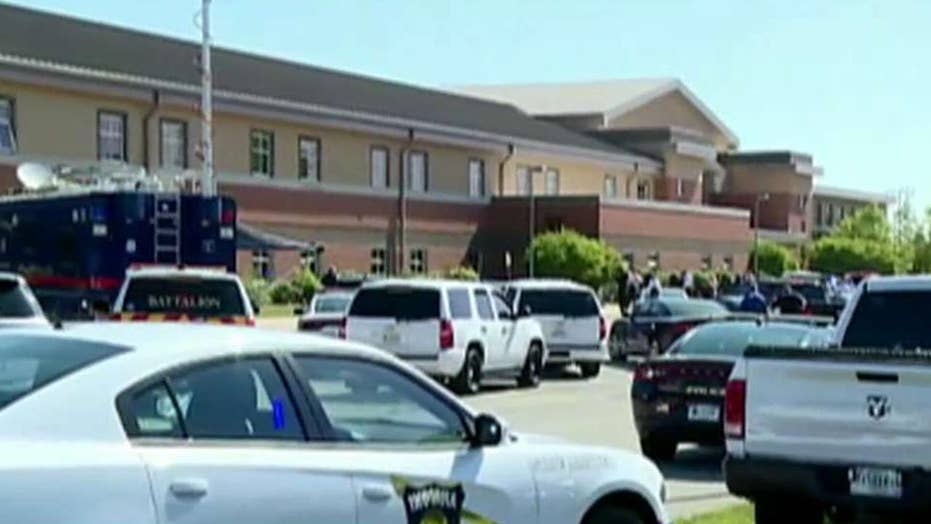 A male student was taken into custody after a shooting at an Indiana middle school that left a student and a teacher critically injured on Friday, authorities said.

A student and a teacher were injured in the shooting at Noblesville West Middle School in Indiana on Friday, May 25, 2018. (FOX 59)

There were two people injured - a teacher and a student - Jowitt said. The victims were transported to the hospital and their families have been notified.

The suspect nor the victims have been identified. Authorities declined to name the suspect and victims in two press conferences Friday.

Jowitt said he did not believe there was any further threat to the school but added there was a threat directed to Noblesville High School, where many middle school students were bused to following the incident. He said police were at the school's campus monitoring the scene but have not found anything. A number of agencies, including the FBI and the Bureau of Alcohol, Tobacco, Firearms and Explosives were on the scene investigating the incident. Jowitt said an investigation has been opened into the shooting.

Authorities said the suspect excused himself from the classroom Friday and when he returned he had two handguns. The situation was said to have resolved extremely quickly. The school does not have metal detectors but there was a resource officer, who works full-time at the school, who was present at the time of the incident.

Ethan Stonebraker, a student, told the Associated Press a science teacher was able to tackle the student who fired shots inside the classroom.

He said the teacher "immediately ran at him, swatted a gun out of his hand and tackled him to the ground."

A male student was taken into custody following the incident at Noblesville West Middle School on Friday, May 25, 2018. (FOX 59)

Stonebraker adds, "If it weren't for him, more of us would have been injured for sure."

Authorities did not say whether the teacher who reportedly tackled the student was one of the victims. However, the teacher, identified by the Indy Star as Jason Seaman, was shot multiple times and went into surgery, his brother Jeremy told the outlet.

Students and parents informed the outlet that it was Seaman who jumped in to stop the suspect.

Following reports of the shooting, a number of politicians tweeted their thoughts, including Vice President Mike Pence.

"Karen and I are praying for the victims of the terrible shooting in Indiana. To everyone in the Noblesville community - you are on our hearts and in our prayers. Thanks for the swift response by Hoosier law enforcement and first responders," Pence tweeted. He was formerly the governor of Indiana.

Police have launched an investigation into the shooting at Noblesville West Middle School on Friday, May 25, 2018. (FOX 59)

Sen. Todd Young said he was in touch with Gov. Eric Holcomb in regards to the incident.

“As details continue to develop, please pray for everyone involved," he tweeted.

The Indianapolis Colts released a statement regarding the shooting.

"On behalf of the entire Colts organization, we extend our thoughts and prayers to the victims of the Noblesville West Middle School shooting and the Noblesville community. We'd also like to thank the first responders, law enforcement officials and medical personnel for their efforts and bravery during today's tragedy. We will continue to pray for the safety of our community during this difficult time," the statement read.

Indiana Gov. Eric Holcomb, who was returning from a trip to Europe on Friday, issued a statement saying he and other state leaders were getting updates about the situation and that 100 state police officers had been made available to work with local law enforcement.

"Our thoughts are with all those affected by this horrible situation," Holcomb said.

Erica Higgins, who was among the worried parents who rushed to get their kids, told WTHR-TV that she learned of the shooting from a relative who called her at home. "I just want to get my arms around my boy," she said.

Higgins said her son was shaken up but knew little about what happened.  "I got a 'Mom, I'm scared' text message and other than that, it was 'come get me at the high school,"' Higgins said.

A number of political leaders have expressed their prayers and condolences following the shooting at Noblesville West Middle School. (Google Earth images)

Chris Navarro, 13, an eighth-grader at the middle school, told the Associated Press he counted 16 gunshots during the shooting. He said he was in the school’s auditorium when he heard the shots.

Public Information Officer Bruce Barnes told reporters that investigators were "doing the best that we can so these situations don't come up again."

The Indiana State Teachers Association released a statement regarding the incident and asked: “When is enough, enough?”

“This national crisis has landed in our backyard. We all have a responsibility to keep our kids safe from violence, and it’s unconscionable that they live in fear that one day their school may be next. When is enough, enough?"

Noblesville, which is about 20 miles northeast of Indianapolis, is home to about 50,000 people. The middle school has about 1,300 students from grades 6-8.

The incident comes a week after an attack at a high school in Santa Fe, Texas, that killed eight students and two teachers.