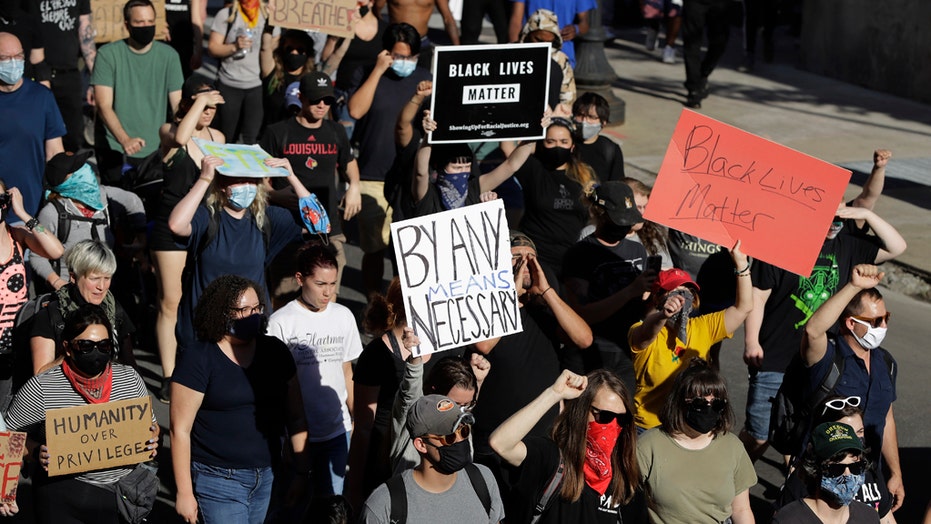 Louisville, Ky., has been upended by daily protests and a crisis of leadership in the mayor’s office and at the top of its police department.

Now, with a new budget due in the coming weeks and constant, ongoing cries for justice, lawmakers and leaders in the Derby City are grappling with how to meet reform demands and maintain public safety.

Conrad was not popular in Louisville; his tenure at the top was marked by numerous scandals and controversies that left children sexually abused by cops, overtime funds pilfered by dishonest officers and low morale throughout the department.

Protesters march Monday, June 1, 2020, in Louisville, Ky., over the deaths of George Floyd and Breonna Taylor. Taylor, a black woman, was fatally shot by police in her home in March.  (AP)

In an emailed response to questions from Fox News, the mayor's spokeswoman Jean Porter said: “It is clear we need to reimagine what policing looks like, not just in Louisville but across the nation. Our residents deserve and demand better, more just and more equitable policing. That’s why the Mayor launched the top to bottom review of the entire department – to uncover opportunities to make the reforms our community needs and demands. That review will include opportunities for public involvement and comment, including the voices of our youth.”

These problems, which have grown in complexity and intensity over the past couple of years, are only compounded by a lack of transparency and action regarding the killing of Breonna Taylor by LMPD officers.

Taylor was a 26-year-old emergency room technician who was asleep on her couch when officers executed a no-knock raid on her home. No-knock raids have since been banned in Kentucky. On Friday, Fischer announced that Louisville Metro Police Officer Brett Hankison, one of three officers involved in the shooting, will be fired.

Speaking to Fox News earlier this month, David James, the Metro Council President, said: “I do believe that at least one of the officers could be terminated, and probably should.

“And I think it would help. I think that the mayor being very transparent about police investigations would be extremely helpful.”

James, himself a 30-year police veteran and emerging voice of reason in the city, said many of the problems the LMPD faces now are the same it faced when he joined the department in 1984. Then, it was under a federal consent decree for discriminatory hiring and promotional practices.

Now, James said the department is made up of about 9 percent of black officers, a tally that falls far short being representative of the city. According to U.S. Census data, Louisville is about 24 percent black and nearly 70 percent white.

“The history of our police department as far as all that goes is very problematic,” James said. “The foundation of the city was built by slaves. In Louisville, Kentucky, we were the first city in the country to create slave leasing. We leased slaves to the railroad. … That is the foundation for which our police department and our city was built upon.”

Louisville isn’t alone in this facing this problem; dozens of cities across the country have heard the call for change after a nationwide uprising following the murder of George Floyd by a white Minneapolis police officer. Floyd’s shocking, agonizing death, renewed a protest movement that has been growing for years following the police killings of Eric Garner, Tamir Rice, Philando Castile, and Breonna Taylor, to name only a few.

According to research compiled by Fox News, at least 40 cities across the country have either made a commitment to reduce police funding or had elected officials express support for that. One city, Minneapolis, voted to completely replace its police force.

Of course, Louisville isn’t unique in having a foundation of racism and subjugation. The rise of a national police reform movement has centered the conversation on the origins of modern American policing. Often, those roots are traced back to the slave patrols that were popular among the American South during the 1800s.

“More than anything, however, what we really need is to rethink the role of police in society,” Alex Vitale, a Brooklyn University professor, wrote in his 2018 book ‘The End of Policing.’ “The origins and function of the police are intimately tied to the management of inequalities of race and class.”

Police, by their own admission, are relied upon to do too much. On a given day, an officer can answer calls regarding domestic violence, homelessness, addiction, mental health crises, and traffic infractions. This breadth of societal responsibilities and shortcomings of professional tools and training are central to the growing chorus of reform.

"Anything that local governments can do right now to divert the calls that police should be answering, we should do it.”

“I think it’s unfair to say that one entity has to solve all these inequities that are structural,” Nelini Stamp, the national organizing director for the Working Families Party, told Fox News. Stamp, a self-described abolitionist, said she wants communities to begin reevaluating their often-unquestioned investment into policing.

“They could be putting more money and resources into affordable housing,” she said. “… Anything that local governments can do right now to divert the calls that police should be answering, we should do it.”

Shifting resources from policing to community investment is central to many calls for reform. In Louisville, Metro Council members say they’re hearing the protestors and taking their demands under consideration. The LMPD’s budget is more than $178 million, only $78 million of which accounts for officer salaries, according to Louisville Metro Government data.

“We are absolutely making changes. Any city council that isn’t open to change and open to hearing the cries of the public would be ignorant.”

“We are absolutely making changes,” Louisville Metro Councilman Anthony Piagentini told Fox News. “Any city council that isn’t open to change and open to hearing the cries of the public would be ignorant.”

Though he wouldn’t specify exactly how the council plans to change the LMPD’s budget, he did say they’re considering a number of areas to boost community investment.

“I think where you’re going to see the investment and the changes is outside the police department,” he said. Piagintini said the Metro Council has focused on combating poverty as a potential solution.

“If you have a good educational base, followed by a job, followed by ownership, you will have stability and freedom in your life,” he continued. “… We’re talking about programs that we would see results in for the next fiscal year.”

Council President James said public safety is always the number one priority for a local government. He agrees that oftentimes crime rises out of the desperation created by poverty and inequity of opportunity.

“Poverty and 400 years of oppression created these issues. That poverty, that oppression, all of that adds up to create the situation we have right now."

“The bottom line is that poverty creates these issues,” James said. “Poverty and 400 years of oppression created these issues. That poverty, that oppression, all of that adds up to create the situation we have right now.

“As long as there’s poverty, as long as people are struggling and suffering, which they are, then we’re going to have these situations,” he continued.

To address poverty in Louisville and across the country, upstart Democratic candidate for Senate Charles Booker has some ideas. His unabashedly progressive candidacy seems made for this moment. Still, he faces an uphill battle to take his party’s nomination and defeat the entrenched Sen. Mitch McConnell, R-Ky., in a primary election.

“We would talk about how do you reimagine police, now the conversation is on a national stage about how to do that. And that’s central to me,” Booker, currently a Kentucky state representative, told Fox News. "This is really a wake-up call to some of our leaders who have not been hearing us yelling for change for years. I’m stepping up to respond to that in a big picture way.”

"This is really a wake-up call to some of our leaders who have not been hearing us yelling for change for years. I’m stepping up to respond to that in a big picture way.”

Booker, who lives in one of the poorest neighborhoods in Louisville, said he’s been hearing people call for investment into public safety that bolsters schools, mental health and community resources rather than traditional policing.

Booker has three main points of federal reform that he believes would go a long way to healing the divide between communities and police and reimagining public safety.

The first is a national “police system review board,” which would track instances of use of force and be a resource for governments to make funding decisions based on how and why force is used.

The second is the creation of a federal office that would provide a racial impact assessment for every piece of legislation, similar to analyses done by the Office of Management and Budget.

“The past year and a half I’ve been working with colleagues in the House and Senate here in Kentucky on this very thing,” Booker said. “We need to be looking at what are the harms,” in policy proposals.

The third is a bill that’s languished in Congress for a couple of years, the Law Enforcement Trust and Integrity Act. The bill addresses police brutality, but Booker said it’s still “tinkering around the edges of how we reorganize policing in this country.”

With protests continuing in the Derby City, the calls for change growing louder, and the officers involved in the killing of Breonna Taylor still on the LMPD payroll, all eyes are on the mayor and Metro Council to answer the citizens’ calls and provide leadership for a city with a broken police force.

“We all want to be in the same spot, and it’s how we get to that spot that’s the issue,” James said. “We’re going to have to have hard conversations, and tears are going to be shed, but in the end, I think we will get there.”