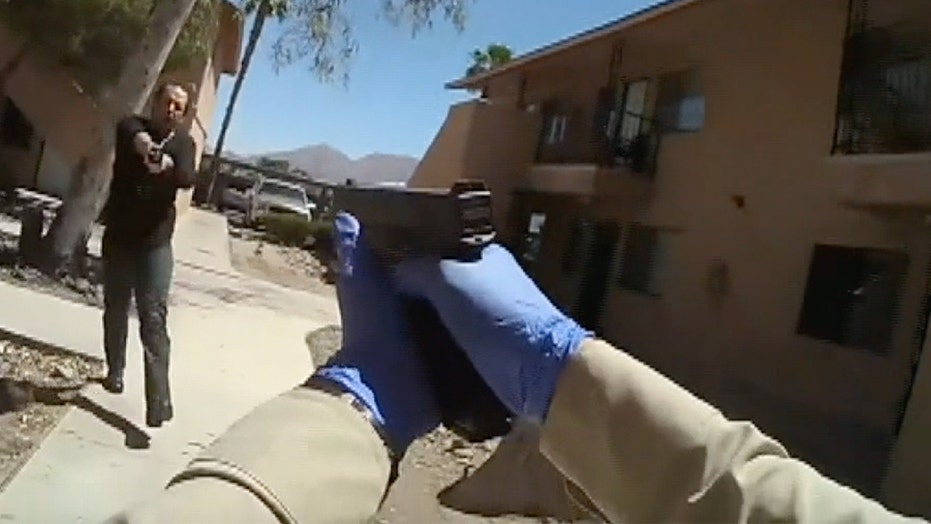 Raw video: Las Vegas Metropolitan Police released footage from a deadly shooting after a man wielding a Samurai sword approached officers and threatened to kill them.

Las Vegas police have released the body camera video of an officer fatally shooting a man who charged toward him and his partner with a samurai sword.

Officer Vincent Segura, 27, and his partner responded to the Sandhill Apartments complex around 11 a.m. May 5 after reports that a man, identified as 40-year-old Justin Charland, was yelling at neighbors and talking to himself, Metropolitan Police Department Assistant Sheriff Brett Zimmerman said in video briefing Friday.

Charland had documented mental health issues and had previous encounters with police, who provided him with assistance relating to mental health, Zimmerman said.

The body camera video released during the briefing showed Charland brandishing the sword while standing atop an outdoor staircase and yelling. Segura asks to speak with Charland and get him help.

“Why are you upset today, Justin?” Segura asks loudly in the video. “I’m trying to understand. I want to talk to you. I want to get you some help.”

When Segura asks Charland to put the sword down, he replies: “No, I will die.” Charland is also heard at another point in the video saying, “You die military-style.”

A few minutes later Charland bounds down the stairs brandishing the sword and says he is a ninja.

“Don't come at me with that, Justin,” Segura shouted to Charland while backing up. “Come on, man, you don’t want to do this.”

Police said the man lunged at officers while police were trying to de-escalate a disturbance call at an apartment. (Las Vegas Metropolitan Police via AP)

Charland shouts “run” multiple times as he continues walking toward Segura and his partner.

“As Mr. Charland was advancing toward the officers, he said he was a ninja and he was going to kill them,” Zimmerman said. He said Charland “lunged” with the 34-inch sword in a “striking position.”

Segura shot Charland three times when he was just a few yards away. The officers performed life-saving measures on Charland, who was later pronounced dead at Sunrise Hospital and Medical Center.

A police team was investigating the officer's use of force, a police statement said. The findings would be forwarded to the Clark County District Attorney’s Office for review. A different police team was examining the incident for a review focused on policy, tactics, and training.

It was the department’s third fatal officer-involved shooting and seventh overall this year.