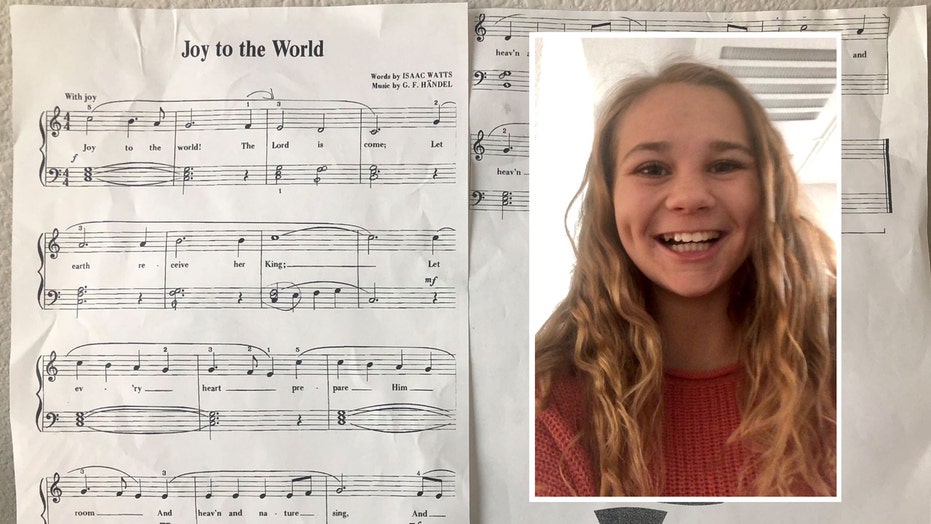 A 13-year-old girl's choice of "Joy to the World" for a piano assignment was rejected for being too "religious" by a California charter school before reversing the decision Tuesday.

Brooklyn Benzel, an 8th-grade homeschooler, was told by a South Sutter Charter School education specialist that her choice "would not be acceptable" Thursday after submitting a video sample of her playing the beginner version of the popular Christmas song.

"My guess (regarding justification) is that there are words in the lyrics that can be considered religious such as 'savior,' and 'heaven,'" the official wrote. "It is widely considered as a Christian hymn and is typically played/sung at Christmas time to celebrate the birth of Jesus Christ."

Brooklyn Benzel, 13, had her song choice of "Joy to the World" originally rejected for being too "religious." (Julianne Benzel)

But Julianne Benzel, Brooklyn's mother who emailed back and forth with school officials, told Fox News her daughter wasn't going to sing any words. She was just going to play the piano.

The school official suggested "Jingle Bells" as a "more cultural" choice "that won't be "construed as religious" and rejected by the school's auditors.

"Would Brooklyn's rendition of 'Joy to the World' pass the auditor's inspection or be flagged as religious?" she wrote. "I am compelled to err on the side of caution, so my answer...is no."

Benzel called it "extremely alarming" that the school official took time to research the song and pick out words that might be considered offensive for a classic song.

"You would think homeschooling would be the safest arena for conservatives," Benzel said. "We are tired and extremely weary of our Christian faith being attacked in this country."

DENNIS PRAGER: WHY SENDING YOUR CHILD TO COLLEGE IS LIKE PLAYING 'RUSSIAN ROULETTE'

The school official responded Tuesday after Benzel threatened legal action through the Pacific Justice Institute, which is suing the company that manages the charter school for a similar case alleging religious discrimination against a piano teacher.

Cynthia Rachel, director of communications and development for IEM Schools, told Fox News school leadership became aware of the situation Tuesday, reviewed it, and "determined it was an acceptable work sample."

"At South Sutter Charter School our goal is to provide students as much flexibility as is allowable by law in all aspects of their education. We recognize and value our students’ First Amendment freedoms, and acknowledge that all public schools must be nonsectarian," Rachel said. "South Sutter will continue to serve its students consistent with the law and its charter."

Brooklyn is also set to play her song at a retirement home for a Christmas concert in December. She chose the song because it's one of her favorite songs during Christmastime.