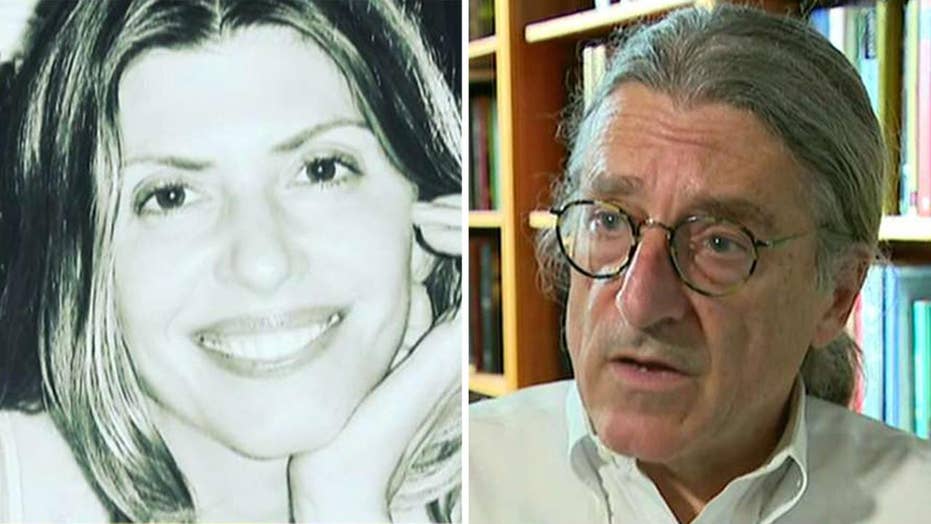 The lawyer for Jennifer Dulos' estranged husband says the missing mom of five one penned a 'Gone Girl'-esque manuscript.

Family and friends of missing Connecticut mother of five Jennifer Dulos on Monday countered a claim from her estranged husband’s lawyer that the author was "deeply troubled,” and said any links to a book she wrote nearly two decades ago were way off base.

In a Fox News interview on Friday, lawyer Norm Pattis said his client, Fotis Dulos, was "emotional, tired, distraught" over the "exhausting ordeal" and disappearance of his estranged wife.

He said Jennifer Dulos "had a troubled past," describing her as a writer who "wrote a manuscript similar to 'Gone Girl,'" a thriller that later became a hit Hollywood movie.

Jennifer Dulos vanished one month ago. (Carrie Luft, on Behalf of the Family and Friends of Jennifer Farber Dulos)

In response, Carrie Luft, a spokeswoman for family and friends of the missing mother, said: “This is not fiction or a movie. This is real life, as experienced every single day by Jennifer’s five young children, her family, and her friends.”

She continued, “We are heartbroken. Jennifer is not here to protect her children, and these false and irresponsible allegations hurt the children now and into the future.”

Luft added, “Evidence shows that Jennifer was the victim of a violent attack in her New Canaan home.”

The couple was in the midst of a bitter custody battle over the five children. Pattis said Jennifer Dulos "seemed intent" on moving the children to New York, where her mother lived, against the joint custody agreement.

"She was not settled happily in New Cannan, intending to live there happily ever after," Pattis said.

However, court documents revealed Jennifer Dulos was "terrified for [her] family's safety." She alleged that her husband, a custom home builder who was born and raised in Greece but went to college at Brown University in the U.S., "has a history of controlling, volatile and delusional behavior."

Luft said Pattis’ suggestion that Jennifer Dulos’ disappearance was tied to a book she wrote was nonsensical.

“I read Jennifer’s novel in installments as she was completing the manuscript,” Luft said. “She finished the draft around 2002. (This was before she was dating Fotis Dulos.) Her book has nothing to do with Gone Girl (published in 2012).”

She added, “Jennifer’s novel is not a mystery. It’s a character-driven story that follows a young woman through relationships and self-discovery over a period of years. Like all of Jennifer’s writing, it expresses a deep longing for human connection and the need to be accepted as one’s true self.”

Fotis Dulos and his live-in girlfriend, Michelle Troconis, both pleaded not guilty to charges of evidence tampering and hindering prosecution earlier this month.

Fotis Dulos' DNA was found mixed with his wife's blood on a kitchen faucet in the New Canaan home where she lived with her children after the couple split, according to State's Attorney Richard Colangelo. Police said the house also had evidence of blood spatter and cleanup attempts, according to the arrest report.

Pattis said he remained skeptical of the state's evidence against his client, which also included surveillance footage of a man resembling Fotis Dulos and Troconis making 30 stops in a vehicle and dumping clothing, sponges and other items, which investigators said have tested positive for the missing mom's DNA at some of those stops.

He said he had not seen the state's security footage but said he had “reasons to doubt that it’s reliable.”

Pattis released a statement on Monday writing, “We are continuing our investigation of Ms. Dulos’s disappearance, and believe it to be entirely consistent with the evidence to conclude that she was not a victim of foul play at the hands of third parties.”

He continued, “Efforts to distance Ms. Dulos from a Gone Girl-type scenario are well-meaning, to be sure. But the fact remains that Ms. Dulos remains accountably ‘Gone,’ and had the imagination, means and motive to disappear."