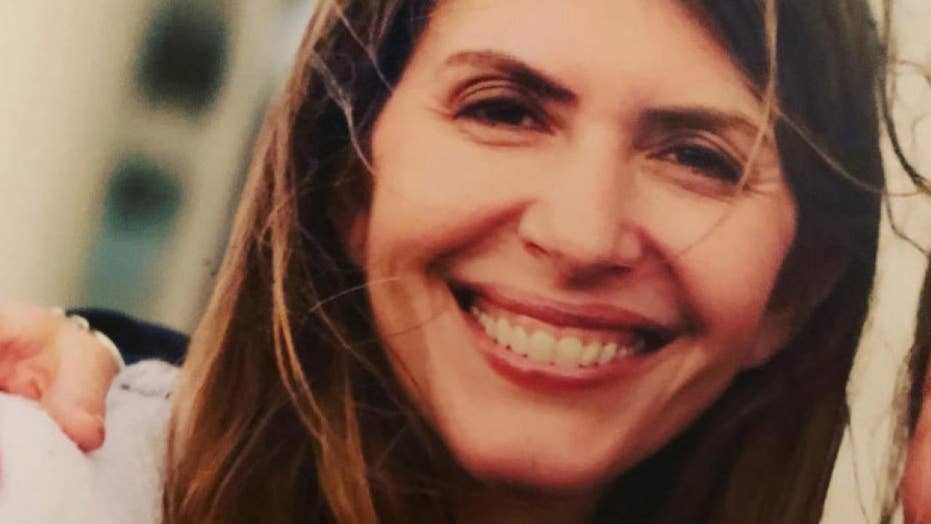 State and local investigators are responding to hundreds of tips received in the search for missing mom of five Jennifer Dulos; Laura Ingle has the latest.

Dive teams in Connecticut focused their efforts Wednesday on "a body of water" as the search for missing mother of five Jennifer Dulos entered its 19th day.

Authorities confirmed that Connecticut State Police divers were searching the pond in the wealthy suburb of Avon while other investigators continued to search a Hartford trash facility "for evidence related to the disappearance of Jennifer."

The Hartford Courant reported that state troopers with dogs searched nearby woods earlier Wednesday before entering the water. The newspaper, citing sources, said police were using sonar equipment to scan the pond.

According to the Courant, Jennifer Dulos’ estranged husband Fotis allegedly forced the couple's children to practice water skiing on the pond. In divorce filings, Jennifer Dulos said the children no longer wanted to partake in the water sport and claimed that Fotis Dulos put too much pressure on them.

"The children have told me that they do not want to waterski at this level,” she said, adding that they were "physically and emotionally exhausted" and had "begged" her to do something about it.

“We are all terrified to disobey my husband,” Jennifer Dulos reportedly wrote.

“On one occasion when my son felt too tired to ski, my husband threw one of his skis against a rock and broke it in a fit of rage,” she added.

Fotis Dulos has been charged with evidence tampering and hindering prosecution in the disappearance of his estranged wife Jennifer Dulos. (Erik Trautmann/Hearst Connecticut Media via AP, Pool)

Authorities say Fotis Dulos and his live-in girlfriend, Michelle Troconis, were captured on surveillance video dumping clothing, sponges and other items that contained Jennifer Dulos' blood at multiple locations in Hartford, including the Materials Innovation and Recycling Authority (MIRA) facility. Police said the people in the surveillance video fit the description of Fotis Dulos and Troconis and cellphone location evidence leads them to believe the couple was there.

Fotis Dulos' attorney, Norm Pattis, said Tuesday that police haven't identified the license plate of the vehicle seen on video in Hartford when the items were discarded.

(Carrie Luft, on Behalf of the Family and Friends of Jennifer Farber Dulos)

Dulos, 50, was last seen on May 24 when she dropped her children off at their private school in New Canaan.

Fotis Dulos posted $500,000 bail on Tuesday after spending more than a week behind bars at the Bridgeport Correctional Center. Officials confiscated his passport and fitted Dulos with a location-monitoring device before his release. Troconis posted $500,000 bail last week. Both have pleaded not guilty to charges of evidence tampering and hindering prosecution.

State's Attorney Richard Colangelo revealed at Tuesday's hearing that Fotis Dulos' DNA was found mixed with his wife's blood on a kitchen faucet in the New Canaan home she lived in after they separated. In arrest warrants, police wrote that blood spatter and evidence of cleanup attempts were also found at the missing mother’s New Canaan home.

When asked why Fotis Dulos' DNA was found mixed with Jennifer Dulos' blood, Pattis said he did not know.

"I would ask everyone to put aside the easy narrative here that an angry ex-spouse took matters into his own hands to resolve a custody dispute. That didn't happen. Having said that, I don't know what happened," Pattis said on Tuesday. He added that he believed his client would be "fully exonerated," saying that the state "picked this fight and we will win it."

Fotis Dulos' next court hearing is set for Aug. 2.

A hearing in the divorce and child custody case was also held on Tuesday before Dulos posted bail. In that hearing, he was ordered not to have contact with his children while free on bail.

A judge did not rule on the custody of the children, whose ages are between 8 and 13 years old, on Tuesday. They have been staying in New York City with Jennifer Dulos' mother, Gloria Farber, who has been granted temporary custody.

According to court documents, more than 400 motions were filed in the divorce and custody battle between Jennifer and Fotis Dulos. The couple accused each other of ignoring court orders and threatened to hurt one another in front of their five children. There were also threats to kill one another and at times, even the children.

Following Fotis Dulos' June 3 arrest, an investigation into his background by Fox News revealed business struggles that left the native of Greece drowning in debt. He got his business Fore Group Inc. off the ground with financial support from his father-in-law, who between 2004 and 2016, fronted him nearly $10 million. The funds were largely cut off in 2017, around the same time his marriage to Jennifer Dulos was ending.

While Fotis Dulos has been behind bars, Troconis was spotted on Thursday meeting with detectives at her lawyer Andrew Bowman's Westport office and the next day she was seen with investigators at the Farmington home she lived in with Dulos. Her next court date is scheduled for July 18.

A New Canaan Police source told Fox News Wednesday that a tip line set up to receive information about Jennifer Dulos' disappearance had taken in 475 tips from all over the U.S. and from as far afield as Australia. The source added that 80 videos had been shared with police in response to a request for footage.