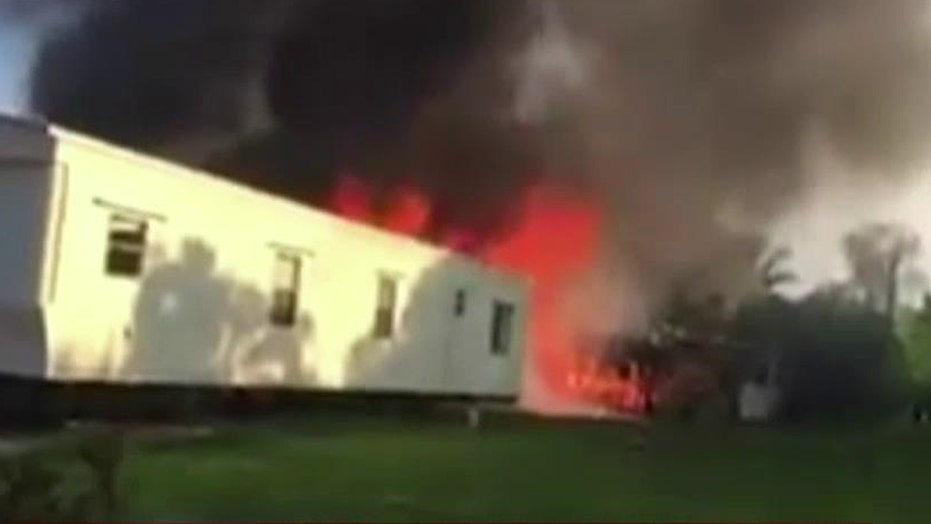 FAA investigators on scene of small plane crash in Florida

A man in Florida said he was outside when a small plane slammed into his mobile home Tuesday, and he immediately started screaming for his 21-year-old daughter inside.

"It was like a bomb," Domingo Galicia told reporters in Palm Springs Wednesday. While he says no one has officially confirmed that his 21-year-old daughter Banny is dead, he has no hope that she survived the crash.

Stephanie Martin said Banny Galicia was her best friend and they'd known each other since middle school.

She was a student at Palm Beach State College, was active in her church and enjoyed listening to Christian music.

Investigators confirmed one woman on the ground and the pilot was killed. The plane struck Galicia's home and fire spread to a nearby home.

"Nothing but a big ball of fire."

No one else was aboard the plane and no one else on the ground was injured when the plane plunged from the sky about 5:30 p.m. Tuesday into a park of a few dozen mobile homes, the National Transportation Safety Board said.

Domingo Galicia said he heard the plane but never saw it. He said he was blocked by flames when he went to open the door to the home after the crash.

"Banny! Banny! Come outside!" he said he screamed at his daughter.

Investigators said it was too soon to speculate on what caused the plane to go down at the Mar-Mak Colony Club, a park a few dozen homes where many of the residents speak only Spanish. The park is dotted with palm trees and bordered by a drive-in movie theater, a wooded area and strip malls catering to Spanish-speaking residents.

The pilot was not identified. Investigators said the plane was flying from Orlando to nearby Lantana.

Clara Ingram, who lives in the trailer park, told The Associated Press that she was home at the time of the crash and heard it happen.

"It just pounded, like an explosion," Ingram said. When she went to look out her door, she saw "nothing but a big ball of fire."

Tyron Caswell, an employee of a car dealership across the street, told the Sun Sentinel newspaper he saw a huge plume of smoke after hearing the crash. He said employees there were reviewing security footage taken outside the building of the plane dropping from the sky.

"When I look back at the video it was like, `Whoa,"' he said, adding he was stunned by how close he was to the crash.

The Red Cross had been called to assist two families, authorities said.