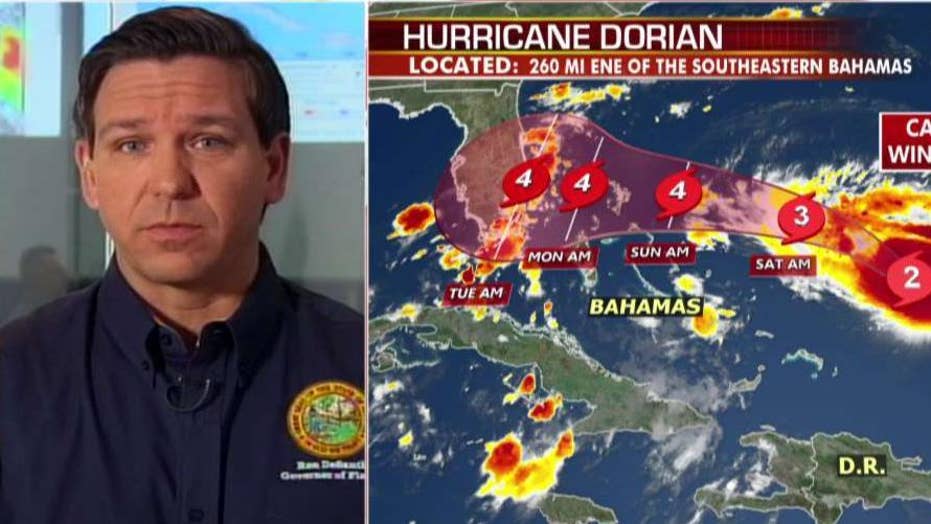 As Hurricane Dorian gains strength on a path to Florida, Gov. Ron DeSantis issues a state of emergency for all 67 counties.

As of Friday afternoon, the major hurricane – which has maximum sustained winds blowing at 115 mph – was centered about 625 miles east of West Palm Beach, moving northwest at 10 mph.

"If it makes landfall as a Category 3 or 4 hurricane, that's a big deal," University of Miami hurricane researcher Brian McNoldy told the Associated Press. "A lot of people are going to be affected. A lot of insurance claims."

The National Hurricane Center on Thursday had bumped up the possible strength of Dorian to a Category 4 storm with sustained winds between 130 and 156 mph off the Florida coast. Hurricane watches are currently in effect for portions of the Bahamas, while the storm is predicted to slam into the U.S. on Monday somewhere between the Florida Keys and southern Georgia.

“There is an increasing likelihood of a prolonged period of hazardous weather conditions that could last for a couple of days in parts of Florida early next week,” the NHC said Friday.

President Trump on Friday approved an emergency declaration for Florida and "ordered Federal assistance to supplement State, tribal, and local response efforts due to the emergency conditions resulting from Hurricane Dorian," the White House said.

Officials also are continuing to warn Florida residents that the risk of “life-threatening storm surge” and “devastating hurricane-force winds” along its east coast is increasing, but it’s too early to tell which communities will be hit the hardest.

“Regardless of the exact track of Dorian, heavy rains are expected to occur over portions of the Bahamas, Florida, and elsewhere in the southeastern United States this weekend and into the middle of next week,” the NHC added.

The U.S. Navy on Friday ordered dozens of its warships and aircraft to evacuate two bases in northeast Florida in the Jacksonville area, Fox News confirmed.

No mass evacuations have been ordered yet, but along Florida's east coast, local governments have already started distributing sandbags, shoppers rushed to stock up on food, plywood and other emergency supplies at supermarkets and hardware stores, and drivers topped off their tanks and filled gasoline cans. Some fuel shortages were reported in the Cape Canaveral area.

Josefine Larrauri, a retired translator, told the Associated Press that she went to a Publix supermarket in Miami only to find empty shelves in the water section.

"I feel helpless because the whole coast is threatened," she said. "What's the use of going all the way to Georgia if it can land there?"

Janice Dean has the latest outlook on the storm's path and timeline.

Tiffany Miranda of Miami Springs waited well over 30 minutes in line at BJ's Wholesale Club in Hialeah to buy hurricane supplies. Some 50 vehicles were bumper-to-bumper, waiting to fill up at the store's 12 gas pumps.

"You never know with these hurricanes. It could be good, it could be bad. You just have to be prepared," she said.

Jeff Byard, an associate administrator at the Federal Emergency Management Agency, warned that Dorian is likely to "create a lot of havoc with infrastructure, power and roads," but gave assurances FEMA is prepared to handle it.

"This is going to be a big storm. We're prepared for a big response," Byard said.

Shoppers wait in long lines at Costco, Thursday, in Davie, Fla., as they stock up on supplies ahead of Hurricane Dorian. (AP)

Florida Gov. Ron DeSantis has declared a state of emergency, clearing the way to bring in more fuel and call out the National Guard if necessary, and Georgia's governor followed suit.

Fox News’ Lucas Tomlinson and Travis Fedschun and the Associated Press contributed to this report.