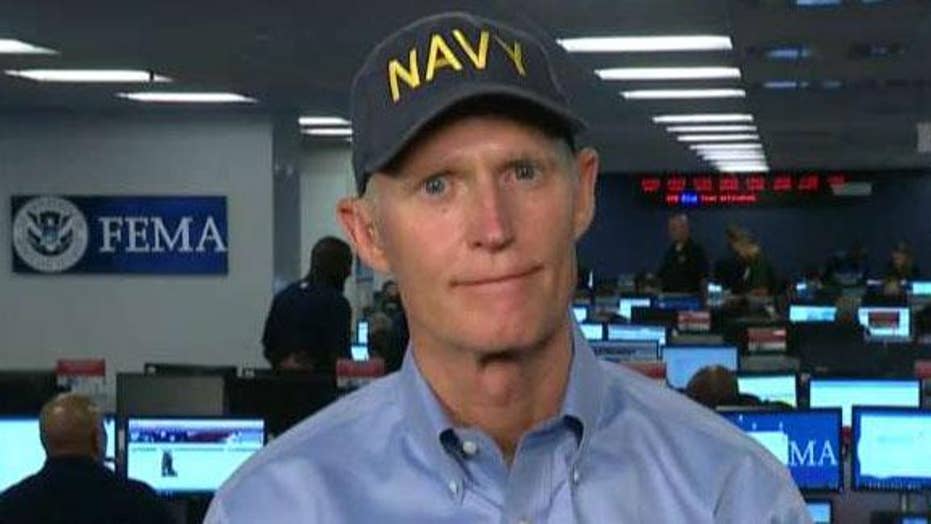 Dorian barreled across the Caribbean overnight, with winds swirling at 150 mph as it headed toward the Southeast coast of the U.S. President Trump warned it could be "one of the biggest and strongest" storms to hit in decades.

The storm was advancing at 8 mph as it moved west, the National Hurricane Center said at 5 a.m. ET Sunday. It was about 70 miles east of Great Abaco Island and the northwestern Bahamas and 255 miles east of West Palm Beach, Fla. Its winds increased Saturday, nearing a Category 5 classification, where winds are sustained over 156 mph.

Authorities evacuated most of the northern shore and low-lying islands in the Bahamas on Saturday, and remaining tourists were sent to shelters.

Shoppers wait in long lines at Costco, Thursday, Aug. 29, 2019, in Davie, Fla., as they stock up on supplies ahead of Hurricane Dorian. (AP Photo/Brynn Anderson)

The storm could make landfall next week in Florida, Georgia or the Carolinas. The NHC has stressed that the storm’s possible path is uncertain and can change, but what is certain is that it will be a dangerous weather event.

There is a "cone of uncertainty" as to where Dorian might make landfall, Fox News meteorologist Adam Klotz said Saturday. The system could travel closer inland near Florida or it could stay out over the Atlantic Ocean more, then proceed north to the Carolinas where it could make landfall.

“Dorian is forecast to move over a deep layer of very warm waters, which is like high octane-fuel for hurricanes,” National Hurricane Center specialist Lixion Avila told the Post and Courier.

National Hurricane Center Director Ken Graham said the "energy and power" of the raw system was clearly visible as of Saturday evening. While there were subtle changes in its forecast, the storm is "still a very dangerous situation over the Bahamas," where up to 25 inches of rain might fall in some places and water levels could rise up to 15 feet above normal height.

Graham said the situation in the Bahamas is "life-threatening" especially because the hurricane becomes "slow and stalled" over that area.

Hurricane warnings were in effect for the northwestern Bahamas and a hurricane watch was in place for Andros Island. There was also a tropical storm watch in effect from Deerfield Beach to Sebastian Inlet in Florida, the NHC said in its advisory at 5 a.m. ET Sunday.

"On this track, the core of Dorian should be near or over portions of the northwestern Bahamas on Sunday, and move closer to the Florida east coast late Monday through Tuesday,” the NHC said.

Jorge Ortiz works to tie down his roof as he prepares for the arrival of Dorian in San Juan, Puerto Rico, Tuesday, Aug. 27, 2019. (AP Photo/Gianfranco Gaglione)

Dorian is expected to bring a life-threatening storm surge that could raise water levels up to 15 feet above normal tides in the northwestern Bahamas, the NHC said.

In the northwestern Bahamas, 10 to 15 inches of rain is expected this weekend into next week, with 25 inches in isolated areas.

Coastal sections of the southeast U.S. could get 4 to 8 inches with up to 12 inches in certain spots, and the rainfall might cause life-threatening flash floods, the hurricane center said.

Officials in Florida, Georgia, North and South Carolina have declared states of emergency due to the possible impacts from Dorian.

“Although the path of #Dorian has shifted, the entire East Coast is still vulnerable to significant impacts,” said Florida Gov. Ron DeSantis. “Residents in East Coast counties should continue to monitor local reports and stay vigilant.”

President Trump on Friday approved an emergency declaration for Florida and "ordered federal assistance to supplement state, tribal and local response efforts due to the emergency conditions resulting from Hurricane Dorian," the White House said.

“Looking like our great South Carolina could get hit MUCH harder than first thought,” the president tweeted Saturday morning. “Georgia and North Carolina also. It’s moving around and very hard to predict, except that it is one of the biggest and strongest (and really wide) that we have seen in decades. Be safe!”

Authorities have cautioned all residents to prepare and have seven days’ worth of food, water and medicine.

"It is imperative that all Floridians and their families take Hurricane Dorian seriously,” DeSantis said Friday night. “The time to prepare diminishes by the hour, particularly because we are still uncertain of where it will make landfall. Everyone should have seven days of food, water and medicine in preparation for this storm. Additionally, all residents need to be prepared to evacuate, should that be required.”

No mass evacuations have been ordered yet because of the uncertainty of Dorian’s path.

“Sometimes if you evacuate too soon, you may evacuate into the path of the storm if it changes," DeSantis said.

The Navy has ordered dozens of warships and aircraft to evacuate two bases in northeast Florida ahead of Dorian's anticipated arrival, and "Sortie Condition Alpha" was declared Thursday for ships homeported at Mayport Naval Station at the mouth of the St. Johns River east of Jacksonville. “Sortie Condition Alpha" means units must prepare to dispatch or deploy because destructive weather is expected within 24 hours.