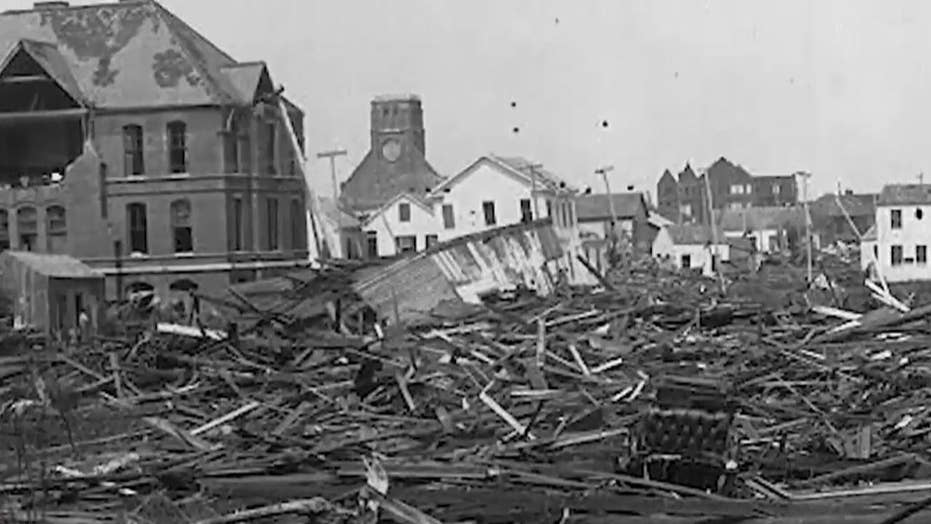 A look back at the devastating 1900 Galveston hurricane

An estimated 12,000 lost their lives in the deadliest natural disaster in American history

Between early June and late November, coastal locations from Texas to Maine are vulnerable to the wrath of hurricanes that can cause vast destruction.

On average, 12 tropical storms - six of which become hurricanes - form over the Atlantic Ocean, Caribbean Sea, or the Gulf of Mexico during the hurricane season, according to the National Weather Service.

Hurricanes have also claimed thousands of lives and caused tens of billions worth of damage. Here are the costliest hurricanes to strike the U.S. mainland:

Hurricane Andrew made landfall in Florida as a Category 5 storm on Aug. 24, 1992. (National Weather Service)

Hurricane Andrew was the strongest and most devastating hurricane on record to hit southern Florida when it made landfall on August 24, 1992. The Category 5 storm had maximum sustained winds of 165 mph and was one of only four Category 5 hurricanes to make landfall in the U.S. since 1900 (the others being the 1935 Florida Keys Labor Day storm, Hurricane Camille in 1969, and Hurricane Michael in 2018.)

The storm caused an estimated $27 billion in damages and was the most expensive natural disaster until Hurricane Katrina 13 years later, according to the NWS.

"Almost all of the damage cost was from southern Dade County, where the number of homes destroyed was approximately 49,000, with an additional estimated 108,000 damaged," the NWS says in a factsheet. "In Homestead, the hardest hit community, more than 99% (1167 of 1176) of all mobile homes were completely destroyed."

After hitting South Florida, Andrew moved across the Gulf of Mexico and made landfall in Louisiana as a Category 4 storm on Aug. 26, 1992. The storm directly caused 26 deaths in the U.S.

Hurricane Ike made landfall along the north end of Galveston Island in Texas on Sept. 13, 2008, as a Category 2 storm with 110 mph winds. The storm went on to kill 21 people in Texas, Louisiana, and Arkansas.

Storm damage along the Texas coast can be seen in this 2008 photo from the National Oceanic and Atmospheric Administration. (NOAA)

"Ike's storm surge devastated the Bolivar Peninsula of Texas, and surge winds and flooding from heavy rains caused widespread damage in other portions of southeastern Texas, western Louisiana, and Arkansas," according to the NHC. Property damage from Ike was estimated at about $30 billion, making the storm at the time the costliest to affect the U.S. after Hurricane Katrina in 2005.

The entire Sunshine State was under threat when Hurricane Irma made landfall as a Category 4 storm with 130 mph winds on Sept. 10, 2017, along the Florida Keys before moving northward along Florida's Gulf Coast over the next day.

The storm had a wind field that expanded dramatically as the storm approached the state, with tropical-storm-force winds extending outward up to 400 miles from the center, while hurricane-force winds extended up to 80 miles.

"Hurricane force wind gusts (i.e. 74 MPH or more) were reported along much of the east coast of Florida, from Jacksonville to Miami," the NWS' Tallahassee office said. "In addition to the long periods of heavy rain and strong winds, storm surge flooding also occurred well away from the storm center, including the Jacksonville area, where strong and persistent onshore winds had been occurring for days before Irma’s center made its closest approach."

Irma caused about $50 billion worth of damage, according to the NHC.

In this Nov. 14, 2012 photo, Louise McCarthy places an American flag on a street sign for Irving Walk in the Breezy Point neighborhood of Queens, N.Y. The sign survived a fire that swept through the seaside community during Superstorm Sandy two weeks earlier. (AP Photo/Mark Lennihan)

Sandy was a late-season hurricane in October 2012 that intensified into a hurricane as it tracked north across Jamaica, eastern Cuba, and the Bahamas.

The storm moved northwest of the U.S. until turning west toward the Atlantic Coast on Oct. 28, 2012, before transitioning to a post-tropical cyclone just prior to making landfall near Atlantic City, N.J. on the evening of Oct. 29, 2012.

Assessing the damage after an unprecedented storm

"In the United States, 72 direct deaths were noted, making Sandy the deadliest U.S. cyclone outside of the southern states since Agnes (1972)," the NHC said in its report.

The storm is estimated to have caused $65 billion in damages, with at least 650,000 homes either damaged or destroyed. A "vast majority" of the damage was caused by storm surge and/or waves, according to the NHC.

This photo, from NOAA, shows Hurricane Maria at its strongest on Sept. 20, 2017. (National Oceanic and Atmospheric Administration)

The third-costliest storm to impact the U.S. struck Puerto Rico in 2017.

"Hurricane Maria knocked down 80 percent of Puerto Rico’s utility poles and all transmission lines, resulting in the loss of power to essentially all of the island’s 3.4 million residents," according to NOAA's factsheet. "Practically all cell phone service was lost and municipal water supplies were knocked out."

For many parts of Puerto Rico, the recovery from category 4 Hurricane Maria remains far from complete; Phil Keating reports from Yabucoa.

The storm ranks third highest for causing an estimated $90 billion in damage, according to the NHC's factsheet. The storm's official death toll was raised from 64 to 2,975 last August in response to a new study that found the initial numbers reported were undercounted.

There's no national standard for how to calculate disaster-related deaths. While the National Hurricane Center (NHC) reports only direct deaths, such as those caused by flying debris or drowning, some local governments may include indirect deaths from things as heart attacks and house fires.

Researchers with the Milken Institute School of Public Health at George Washington University said they counted deaths over the span of six months — a much longer period than usual — because so many people were without power during that time.

Hurricane Harvey became the first major hurricane to make landfall in the United States since 2005 when it roared ashore as a Category 4 storm in Rockport, Texas on August 26, 2017.

The eye of Hurricane Harvey can be seen as it makes landfall near Rockport, Texas in August 2017. (NHC)

"In a four-day period, many areas received more than 40 inches of rain as the cyclone meandered over eastern Texas and adjacent waters, causing catastrophic flooding, "according to the NWS.

With a peak accumulation of over 60 inches of rain, Hurricane Harvey produced the most rain on record for a tropical storm or any other weather event in the U.S. The storm caused an estimated $125 billion in damages, according to the NOAA.

"At least 68 fatalities in Texas alone were directly attributable to this event, the highest death toll due to a tropical system in that state since 1919," according to an NWS assessment.

The all-time costliest hurricane to strike the United States took place in 2005 when Hurricane Katrina targeted Florida as a Category 1 storm before strengthening into a monster Category 5 in the Gulf of Mexico. The storm weakened down to a Category 3 as it made landfall along the northern Gulf Coast on Aug. 29, 2005.

"Even so, the damage and loss of life inflicted by this massive hurricane in Louisiana and Mississippi were staggering, with significant effects extending into the Florida panhandle, Georgia, and Alabama," the NHC said in its report. "Considering the scope of its impacts, Katrina was one of the most devastating natural disasters in United States history." 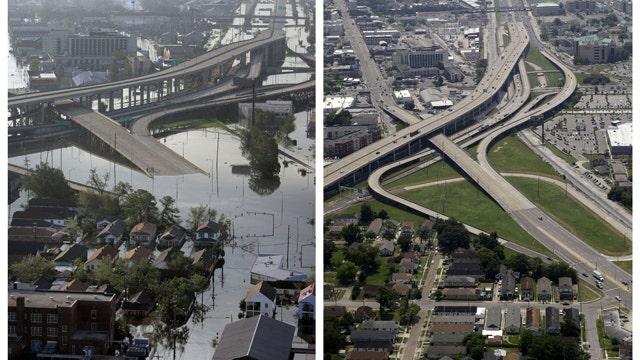 The storm is blamed for the deaths of at least 1,200 people and ranks in the top 5 deadliest storms on record to strike the U.S. Katrina also caused an estimated $125 billion in damages, as major flooding inundated New Orleans and massive storm surge obliterated coastal areas of Mississippi and Alabama.

"The scope of human suffering inflicted by Hurricane Katrina in the United States has been greater than that of any hurricane to strike this country in several generations," the NHC said.