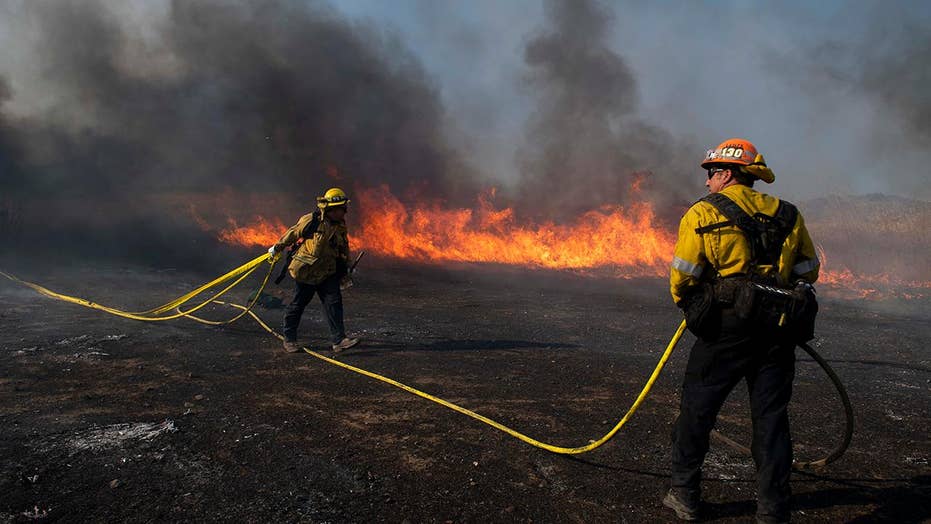 Christina Coleman reports from Simi Valley, California on the latest status of the wildfires burning in the state.

As the battle continues against a wind-driven wildfire northwest of Los Angeles that sent tens of thousands fleeing their homes, arson inspectors in California have visited a homeless encampment near the area where the blaze started.

Fire crews have slowed the growth of the Easy Fire and are attacking hotspots within the 2.5-square-mile blaze near the communities of Simi Valley and Moorpark.

The Easy Fire erupted Wednesday morning and spread rapidly through brush and trees near horse ranches, suburbs and the hilltop Ronald Reagan Presidential Library. Two structures were destroyed but officials didn't immediately say if they were homes.

‘EXTREME RED FLAG WARNING' IN SOUTHERN CALIFORNIA: WHAT TO KNOW

The Ventura County Fire Department said the Easy Fire was reported around 6 a.m. in the 200-block of West Los Angeles Avenue located near the 118 Freeway and Madera Road in Simi Valley. People living at a homeless encampment who had to evacuate themselves said they had to run for their lives.

"We lost everything even though we didn't have much," Silke Brown, who lived in a tent in the encampment near Easy Street, told the Los Angeles Daily News.

Brown, who told the newspaper she didn't see anyone cooking or smoking in the encampment before the blaze erupted, said she heard popping before someone yelled "Fire, fire!"

A reporter from the Los Angeles Daily News tweeted an image of arson investigators interviewing people who lived in the encampment prior to the outbreak of the blaze.

While officials have not yet said what sparked the Easy Fire, Southern California Edison filed a report with state regulators to say it began near its power lines. Electrical equipment has sparked some of California's worst wildfires in recent years and prompted utilities to resort to precautionary power outages. SoCal Edison had not cut power in the area at the time this fire started, according to the Associated Press.

More than 1,000 firefighters continued to battle the wind-driven brush fire. Three firefighters were injured Wednesday and treated at an area hospital for smoke inhalation, FOX11 reported.

About 26,000 people remain evacuated from ranch properties and suburbs in the area.

The ferocious Santa Ana winds are expected to linger for a final day across Southern California after fueling more than a dozen wildfires across the region.The National Weather Service issued a rare "extreme red flag warning" until 6 p.m. on Thursday for much of Los Angeles and Ventura Counties due to the Santa Ana winds event that's expected to last around 36 hours.

"These prolonged dangerous fire weather conditions, combined with the very dry fuels and presence of existing fires and associated flare-ups adds up to extreme red flag conditions for much of Los Angeles and Ventura counties," the NWS said. "As a result, there is high potential for very rapid fire growth and extreme fire behavior with new or existing fires."

Peak gusts on Thursday are expected to reach up to 65 mph, which is "a bit weaker" than on Wednesday when wind gusts reached up to 76 mph.