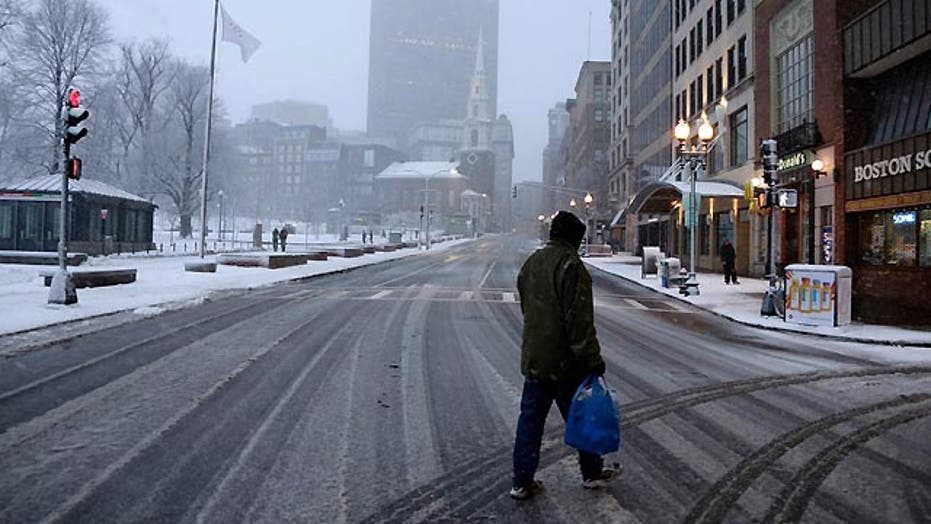 Massachusetts orders drivers off the road

Governors of four states have declared a state of emergency as forecasters say a massive blizzard is poised to dump up to 3 feet of snow on the Northeast.

Snow began falling Friday morning in some areas with the heaviest amounts expected to fall at night and into Saturday. Wind gusts are expected to reach up to 75 mph.

Massachusetts Gov. Deval Patrick declared a state of emergency and banned travel on roads as of 4 p.m. as the state braced for the storm.

As the storm gains strength it will bring "extremely dangerous conditions" with bands of snow dropping up to two to three inches per hour at the height of the blizzard, Patrick said.

Widespread power failures were feared, along with high tides and flooding in much of the coastal areas.

Connecticut Gov. Dan Malloy declared a state of emergency and is asking all residents to limit travel. Roads in the state will be subject to closure beginning at noon.

“People need to take this storm seriously. If current predictions are accurate, we will need people to stay off the roads so that emergency personnel and utility crews can get to the places they need to get to, and make sure that our plows can keep critical roadways clear,” Malloy said.

“Please stay home once the weather gets bad except in the case of real emergency.”

New York Gov. Andrew Cuomo also declared a state of emergency to give the government more flexibility in dealing with the snow and ice expected in the area. Cuomo says the weather will be bad, but the state has been through much worse.

In New England, it could prove to be among the top 10 snowstorms in history, and perhaps even break Boston’s record of 27.6 inches, set in 2003 forecasters said. The last major snowfall in southern New England was well over a year ago, the Halloween storm of 2011.

Gov. Lincoln Chafee declared a state of emergency in Rhode Island as some areas of the state are predicted to get 2 feet of snow.

The governor urged residents to take “extreme caution” and stay off the roads.

More than 3,700 flights through Saturday have been canceled with disruptions from the blizzard certain to ripple across the U.S.

At Boston’s Logan and other New England airports, most airlines were to cease operations between noon and 4 p.m. and would restart Saturday. Amtrak said its Northeast trains will stop running Friday afternoon.

“This one doesn’t come along every day. This is going to be a dangerous winter storm,” Alan Dunham, meteorologist for the National Weather Service in Taunton, Mass. said.

“Wherever you need to get to, get there by Friday afternoon and don’t plan on leaving.”

New York City Mayor Michael Bloomberg said plows and 250,000 tons of salt were being put on standby as he urged residents to stay home Friday night.

“We hope forecasts are exaggerating the amount of snow, but you can never tell,” Bloomberg said. New York City is expected to get between 10-15 inches of snow across its five boroughs.

Blizzard warnings were issued for parts of New Jersey and New York’s Long Island as well as portions of Massachusetts, Rhode Island and Connecticut. The warnings extended into New Hampshire and Maine.

In Whitman, a southeast Mass. town where up to 30 inches of snow is forecast, public work crews were cleaning crosswalk signs, trash barrels and anything else that might impeded plows later.

“We’ve had instances where they have predicted something big and it’s petered out,” Dennis Smith, a DPW worker said. “I don’t think this is going to be one of those times.”

Diane Lopes was among the shoppers who packed a supermarket Thursday in the coastal fishing city of Gloucester, Mass. She said she went to a different grocery earlier in the day but it was too crowded. Lopes said she has strep throat and normally wouldn't leave the house but had to stock up on basic foods -- "and lots of wine."

She chuckled at the excitement the storm was creating in a place where snow is routine.

"Why are us New Englanders so crazy, right?" she said.

At a Shaw's supermarket in Belmont, Mass., Susan Lichtenstein stocked up, with memories of a 1978 blizzard on her mind. "This is panic shopping, so bread, milk, a snow shovel in case our snow shovel breaks," she said.

In New Hampshire, Dartmouth College student Evan Diamond and other members of the ski team were getting ready for races at the Ivy League school's winter carnival.

"We're pretty excited about it because this has been an unusual winter for us," he said. "We've been going back and forth between having really solid cold snaps and then the rain washing everything away."

But he said the snow might be too much of a good thing this weekend: "For skiing, we like to have a nice hard surface, so it will be kind of tough to get the hill ready."

Terrance Rodriguez, a doorman at a luxury apartment complex in Boston, took the forecast in stride.

"It's just another day in Boston. It's to be expected. We're in a town where it's going to snow," he said. "It's like doomsday prep. It doesn't need to be. People just take it to the extreme."