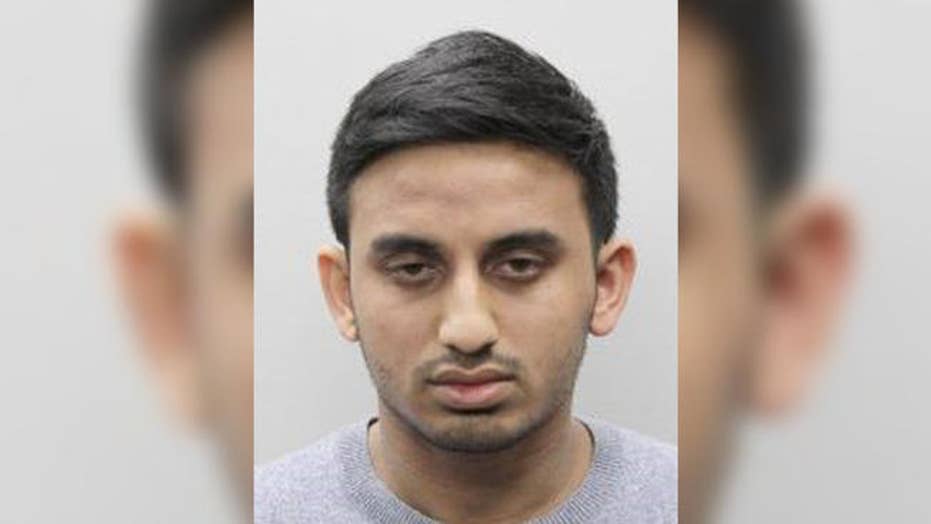 A Virginia man who worked as a substitute teacher and teacher's assistant at a local elementary school in Fairfax County was sentenced to 150 months in prison and 20 years of supervised release on Friday for the attempted coercion and enticement of a minor and distribution of child pornography, according to a release by the Justice Department.

Monis Irfan, 21, pleaded guilty on July 19 after an undercover police sting found that he communicated online with a Fairfax County police detective posing as the father of a 7-year-old child, who wasn't real.

"Irfan repeatedly told the detective that he was sexually interested in and active with children, and discussed his desire to perform graphic sexual acts on the detective’s fictitious child," the release said.

Monis Irfan, 21, pleaded guilty on July 19 after an undercover police sting found that he communicated online with a Fairfax County police detective posing as the father of a 7-year-old child, who wasn't real. (Fairfax County Police Department)

"After several days of sending sexually explicit messages and images, Irfan drove to a predetermined location to meet the undercover detective and engage in sexual acts with the child."

He was arrested after meeting face to face with the detective.

The investigation found that Irfan also received and distributed child pornography that depicted the sexual abuse of an infant over encrypted messaging apps on his phone.

The release stated that he also recorded a video of himself engaging in sexually explicit acts with a 5-year-old.

The case was investigated by the FBI Washington Field Office's Child Exploitation and Human Trafficking Task Force and the Fairfax County Police Department. It was brought as part of Project Safe Childhood, an initiative launched in 2006 that helps combat child sexual exploitation and abuse across the U.S.

Irfan worked as an instructional assistant and substitute teacher at Bush Hill Elementary School in Fairfax County, Virginia, who suspended him in Feb. after his crimes went public.

“Irfan was an elementary school employee who was entrusted with teaching and protecting our community’s children,” said Zachary Terwilliger, U.S. Attorney for the Eastern District of Virginia, according to the Fairfax Times. “But he was also a wolf in sheep’s clothing looking to prey on the most vulnerable members of our society, and he undertook a horrific hunt for opportunities to sexually abuse children. Our office is committed to working closely with state, local and federal authorities to ferret out such sexual predators, and we commend our investigative partners for their work in this case.”