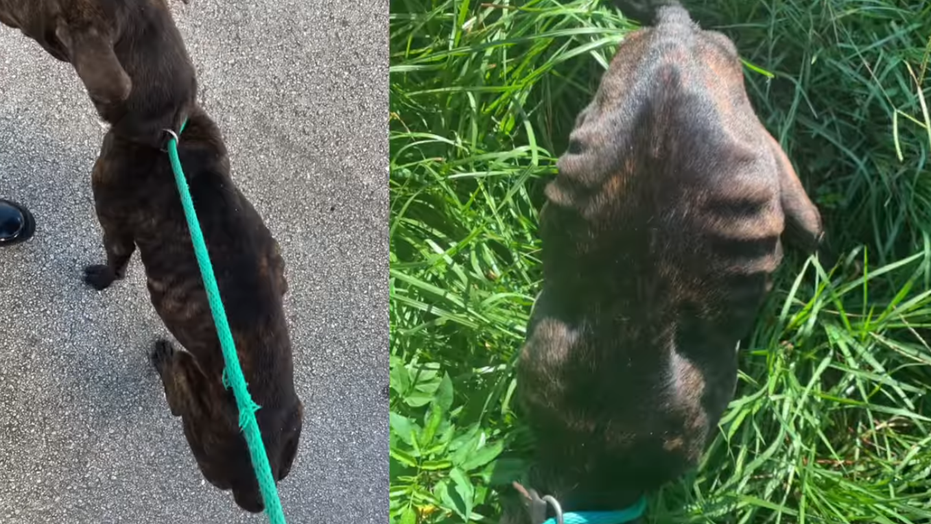 A Florida woman was arrested after she was caught on camera shoving her dog in her hot car trunk — after she tried and failed to dump it at the local shelter, police said.

Sara Perry, 27, was booked on felony animal cruelty charges on Thursday after she tried to drop off her "visibly emaciated" dog, named Neptune, at an animal shelter in Brevard County, the sheriff's office said.

DOG FOUND ON SIDE OF OHIO ROAD WITH THROAT CUT, NOSE AND MOUTH DUCT-TAPED, POLICE SAY

She allegedly tried to get the shelter to either take in the dog or euthanize it — neither of which the shelter said they could do, as the shelter was full and they don't euthanize animals for the public.

Perry "became extremely angry" and was filmed by a bystander pulling the dog by its leash into the hot trunk of her car," Sheriff Wayne Ivey said. Separately, shelter workers took photos of Perry's license plate and reported her to county animal services.

Investigators located Perry and the dog, who Ivey described as "visibly emaciated and appeared to be uncared for." He said a veterinarian found Neptune to be "in very poor health and was extremely malnourished."

Sara Perry, pictured here, was charged with felony animal cruelty after trying to drop her dog off at a local animal shelter in Florida last week. (Brevard County Sheriff's Office)

Perry was taken into custody on charges of felony animal abuse "for the despicable way she treated this poor, helpless pet," the sheriff said.

"The abuse of this innocent pet makes absolutely no sense and can only be attributed to someone who has zero compassion for animals, and, quite frankly, shouldn't be allowed to even own a plant, much less a pet," Ivey said in a Facebook video.

The sheriff added that "anyone who can do something like this to an innocent pet could just as easily do it to a human, so I have zero remorse about locking her up or sympathy for any excuse she may have for her actions."

Online records indicate Perry, of Cocoa, was released on $2,000 bond and made her initial appearance in court Friday.