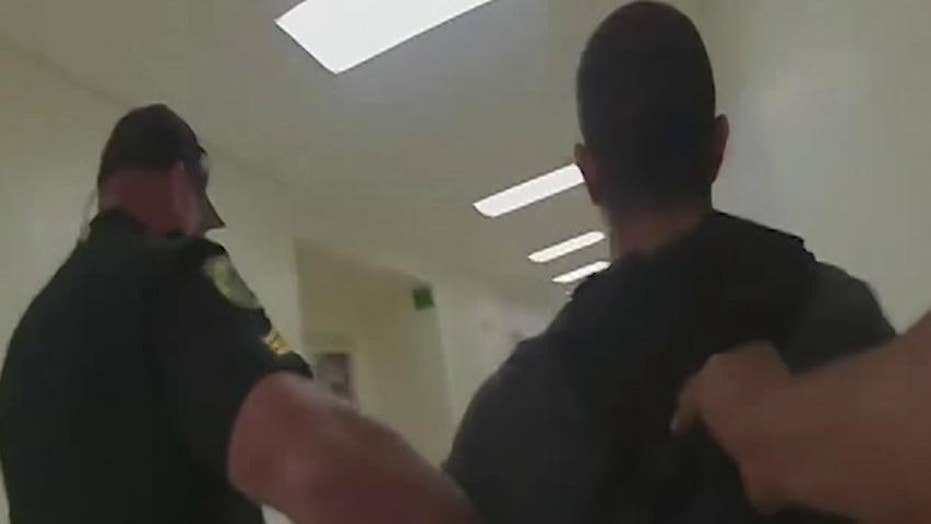 Video recorded by the body camera worn by a Florida deputy shows the apprehension of an accused school shooter.

Authorities say Sky Bouche, 19, opened fire at Forest High School in Ocala, Florida in April. One student, a 17-year-old boy, was injured in the incident.

Surveillance video from the school has also been released, in which you see Bouche bounding up some stairs, carrying a guitar case. Inside that case, deputies say, was a 16-gauge, sawed-off shotgun, a tactical vest, gloves, and multiple shotgun shells.

Deputies say Bouche went into a boy's bathroom at the school, loaded the gun, and put on his armor. Bouche allegedly fired one round into a classroom -- the shotgun blasting through the door and hitting the student in the ankle.

Body camera video shows Deputy Long racing from room to room, looking for the accused shooter. He finds Bouche in a classroom.

"Put your hands behind your back!" Deputy Long commanded, which was followed by a bizarre exchange.

"I'm sorry sir, I wasn't raised by the right people," Bouche is heard telling Deputy Long, to which the deputy replies, "Are you kidding me? ... Don't say another word!"

In a jailhouse interview with FOX 35/FOX 51, Bouche said that when he fired one shot inside the school, it was a cry for help; however, records show that Bouche had been on the FBI’s radar for at least five years.