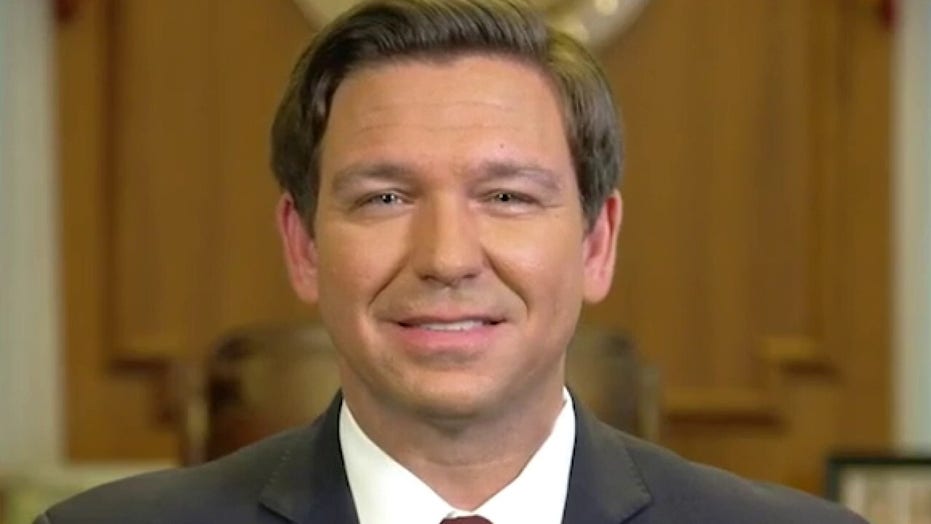 A Florida man protesting prison conditions amid the coronavirus outbreak was arrested Friday after he encased his hands in concrete outside the Governor’s Mansion in Tallahassee.

Jordan Mazurek, 28, was first spotted outside the fencing surrounding the mansion around 6 a.m. Firefighters had to use heavy equipment, including jackhammers, to remove each of his hands from barrels filled with concrete. One barrel read “Stop the massacre," while the other said: “Free prisoners now,” the Tallahassee Democrat reported.

Mazurek used special carabiners to “prevent his arms from being forcibly removed, but he could unclip himself if he chose,” Bradshaw explained. “He refused to let go so we ended up having to use heavy equipment.”

It took firefighters about two hours to free him. He faced a misdemeanor charge of resisting an officer without violence, USA Today reported, citing court records. He got out on $500 bail by that afternoon.

Though Gov. Ron DeSantis, a Republican, was away in Fort Lauderdale to lead a coronavirus news conference, first lady Casey DeSantis could be spotted behind the mansion gates pushing her children on swings as firefighters worked to remove Mazurek.

Mazurek, a sociologist originally from Forth Worth, Texas, later moved to Florida and helped create a group called “Campaign to Fight Toxic Prisons,” the Tallahassee Democrat reported. Mei Azaad, a spokeswoman for the group, said it did not organize the protest but was aware of it.

“This was an escalation to show some people in power that we are serious,” Azaad said. “Our end goal is that everyone in prison should be released. But it should start with the most vulnerable.”

“In the past weeks, community members warned the governor of the public health disaster that would take place inside and outside of so-called correctional facilities if nothing is done to prevent the spread of COVID-19,” the group added in a statement on its website. “Today’s demonstration happened after other avenues were exhausted, and after infection rates have been climbing daily in Florida’s prisons, jails, and detention centers.”

Last week, a separate group called Capital City Mutual Aid organized a protest demanding inmates in Florida prisons and jails be released to stop the spread of coronavirus behind bars. A caravan of about 20 vehicles circled the Capitol complex and the Department of Corrections’ headquarters, chanting and shouting through megaphones.

Meanwhile, in South Florida, the epicenter of the outbreak in the state, officials in Broward County have been working to reduce jail populations in order to prevent the spread of COVID-19 within their facilities. They’ve transferred some inmates prisons while releasing other non-violent offenders to house arrest without bail.