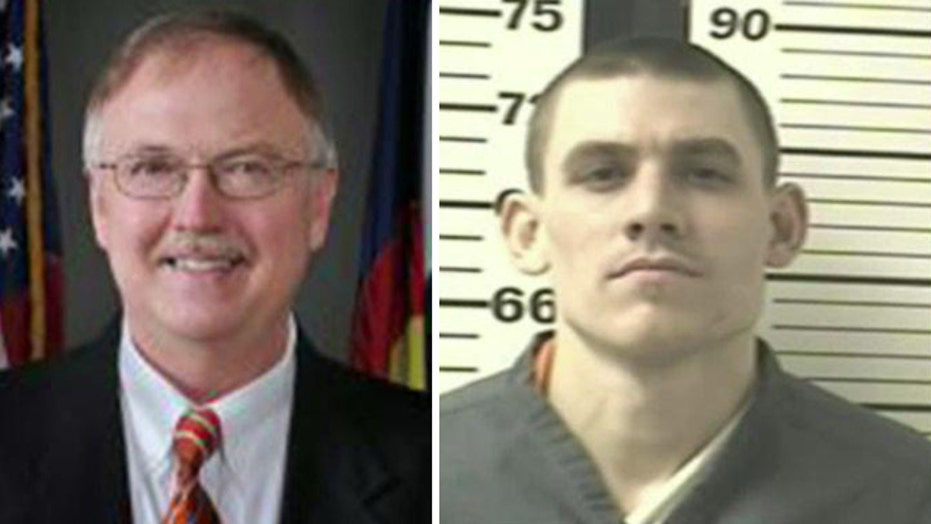 Suspect in prison chief murder released from jail too early

DENVER – Evan Spencer Ebel ran up a long list of felony convictions before turning 21, joined a white supremacist gang behind bars, assaulted one prison guard and wrote that he fantasized about killing others.

Along the way, he benefited from a series of errors in the criminal justice system before he became a suspect in the slaying of Colorado's prisons chief and a pizza deliveryman.

He got out of prison four years early because of a clerical error in a rural courthouse. He slipped his ankle bracelet and violated the terms of his parole last month, but authorities didn't put out a warrant for his arrest until after the killings of pizza delivery man Nathan Leon and corrections chief Tom Clements.

Ebel's streak came to an end on March 21 after he was pulled over by a sheriff's deputy in rural Texas. He died after the ensuing car chase and shootout. The gun he used was the same used to kill Clements; the trunk of Ebel's car held a Domino's pizza box and shirt.

"We have to do better in the future," Tim Hand, the head of the Department of Correction's parole division, said in an interview Tuesday. "It forces us to step back and see what things we need to examine."

Ebel entered Colorado prisons in 2005 after a series of assault and menacing charges that combined for an eight-year sentence. Within six months he landed in solitary confinement, and he bounced in and out of that restricted state until his Jan. 28 release.

In 2006, he slipped his handcuffs, punched a guard in the face and threatened to kill the man's family. Ebel agreed to plead guilty to the attack and receive up to four years more in prison, to be served after his sentence ended.

There was no question in the courtroom that Ebel was supposed to stay in prison well after 2013. "I just think four years is a little stiff, you know," he told Judge David Thorson, according to transcripts of the 2008 hearing released Tuesday. "By the time I get out, I'll be 33."

The judge, however, didn't say the sentence was meant to be "consecutive," or in addition to, Ebel's current one, so it went to the prison system as a sentence to be served simultaneously. Prison officials say they had no way of knowing the intention had been for Ebel to remain behind bars for four more years.

As a result, Ebel was out before his 29th birthday.

Charles Barton, chief judge of the 11th Judicial District, and court administrator Walter Blair, said in a statement that the court regrets the oversight "and extends condolences to the families of Mr. Nathan Leon and Mr. Tom Clements."

Absent a huge audit, there's no way of knowing how common such random clerical errors might be in a legal system that churns out thousands of pages of documents daily, said Bill Raftery, an analyst at the Williamsburg, Va.-based National Center for State Courts.

When Ebel left prison Jan. 28, he entered an overwhelmed parole system that immediately flagged him as a high risk to re-offend. Half of Colorado's parolees end up back in custody.

The toughest cases are people released straight from solitary confinement, like Ebel. But officers who monitor them are deluged with cases -- the industry standard is they should supervise 20 high-risk parolees, but in Colorado they supervise an average of 35. Corrections officials say that's because budget cuts led to fewer resources for parole and more inmates released from prison.

Ebel was placed on the most intensive level of parole, requiring daily calls to corrections, a weekly urine test to see if he was on drugs and medical treatment that corrections officials say they cannot disclose due to federal privacy laws. Prison documents show that parole officials predicted he had a 2-in-3 chance of committing another crime. But he had one thing in his favor: His father.

Ebel's father, Jack, an attorney, found his son a place to live and hired him to work in his law firm performing menial tasks like moving filing cabinets, Hand said. Many offenders end up homeless with daunting prospects of finding work. And many end up re-offending in their first month out of prison.

In contrast, Ebel was, at first, a sterling parolee. He called in every day. He stayed away from alcohol and bars and did not leave the Denver area. He even once checked in because he was concerned he hadn't been subjected to his weekly surprise urinalysis yet.

"What's a surprise is, if you look at this in retrospect, this individual from late January to the middle of March seemed very much focused on doing what was expected of him," Hand said.

That changed at 1:54 p.m. on March 14, when a "tamper alert" was sent out from the vendor that operated the electronic monitoring bracelet around Ebel's ankle. That can mean a number of things, from a battery malfunction to a parolee slipping their bracelet and fleeing, Hand said.

That night, corrections officials left a message for Ebel telling him to report in two days and have the bracelet repaired, records show.

The next day, for the first day since his release, Ebel did not call in for his daily phone check-in.

On March 16, he missed his appointment to repair the bracelet. Only on the following day do the records show that a note was made in the corrections system that he failed to show up. By then, Leon, a father of three, was shot to death after answering a call for a pizza at a truck stop in Denver.

Hours later, Clements answered his doorbell and was fatally shot.

The next morning, still unaware of a connection with the most recent slaying, the state issued a warrant for Ebel's arrest on parole violations.

Authorities are still investigating whether Ebel killed Clements, and if so, why.

He clearly expressed anger at prison staff in the past.

"I just fantasize about catching them out on the bricks and subjecting them to vicious torture and eventual murder," Ebel said in a letter confiscated in 2006 by prison guards. "And that seems to get me through the days (with) a good degree of my sanity remaining intact."