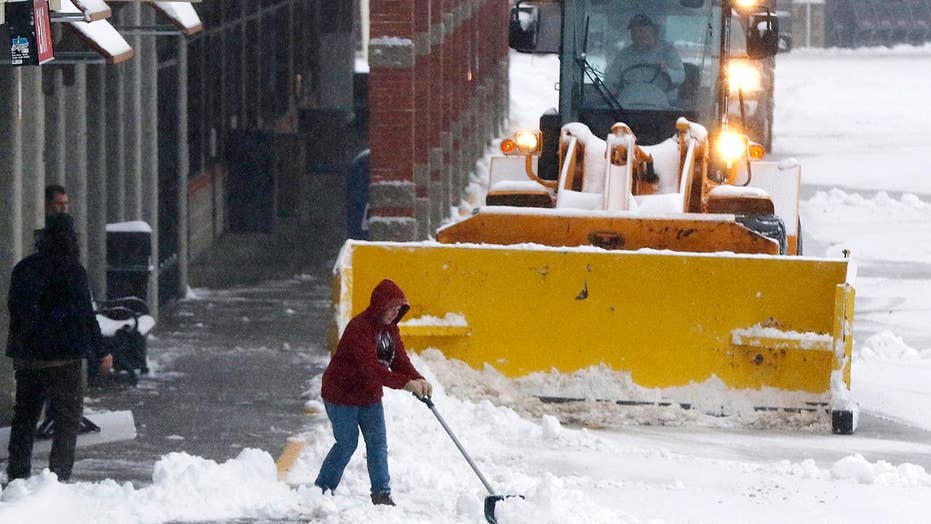 A deadly winter storm that pummeled the West Coast and northern Midwest as millions of travelers returned home from their Thanksgiving holiday is taking aim at the Northeast, causing hundreds of flight cancellations early Monday.

The storm, which for days has been dumping heavy snow from parts of California to the northern Midwest and inundating other areas with heavy rain, has been responsible for several deaths, according to reports.

The National Weather Service (NWS) predicted more than a foot of snow in parts of upstate New York and the New England region, as well as ice accumulations in parts of Pennsylvania.

As the storm shifted east, flight delays and cancellations piled up, disrupting travelers heading home after Thanksgiving. By 5: 23 a.m., there were a total of 488 flight cancellations within the U.S. and 262 delays.

State police had responded to more than 550 storm-related crashes across New York by 7 p.m. today and Cuomo placed National Guard personnel on standby. Icy roads caused numerous crashes on Interstate 84 in Pennsylvania today and a section of Interstate 81 north of Binghamton was closed because of icy conditions for a while.

Newark, N.J, had more than 30 flight cancellations and some inbound planes were being delayed by an average of more than 2 and a half hours due to the weather. There were also dozens of flight delays in Chicago and Minneapolis.

Much of interior Massachusetts, meanwhile, could get up to a foot of snow. Boston is projected to get between 3 and 6 inches of snow.

Elsewhere in the country, the storm proved deadly.

The bodies of a boy and a girl, both 5, were found in central Arizona after their vehicle was swept away in floodwaters Friday while crossing a swollen creek.

Two adults and four other children were rescued by a helicopter, but a 6-year-old girl is still missing, officials said. Rescuers were combing the area of Tonto Basin, about 50 miles northeast of Phoenix, with helicopters, drones, boats and dogs.

Thanksgiving travel was snarled in some places by two powerful storms.  (Caltrans via AP)

Two boys, ages 5 and 8, died Saturday near Patton, Missouri, when the vehicle they were riding in was swept off flooded roads. About 10 miles east, a 48-year-old man died in a separate incident; a storm-related death was also reported in South Dakota.

Major highways reopened Sunday in Wyoming and Colorado, a day after blizzard conditions clogged roads with snowdrifts. Road crews were able to reopen all of Interstate 25 and most of I-80 in Wyoming early Sunday after strong winds abated. Major interstates in Colorado were also reopened.

Duluth, Minnesota, was blanketed with more than 20 inches of snow through Sunday afternoon. Farther south, precipitation was in the form of rain and thunderstorms.