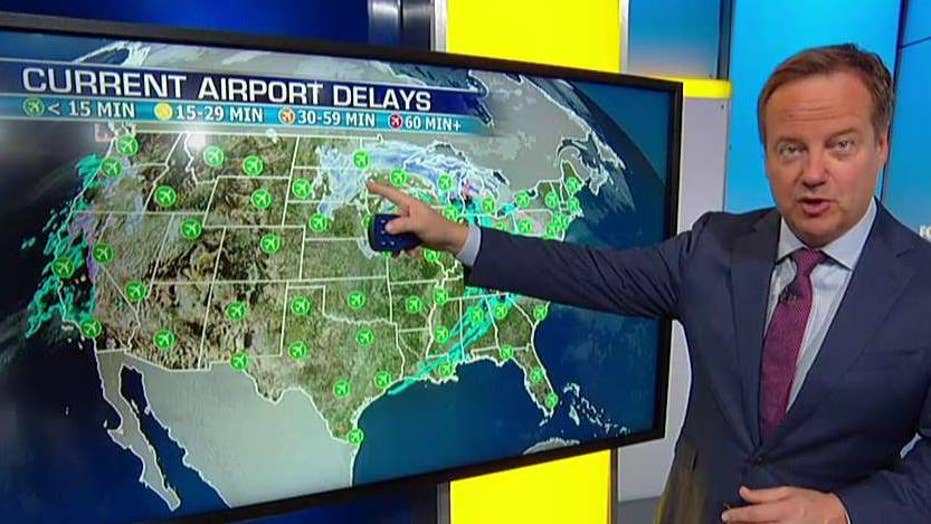 A storm system that's caused travel headaches from the West Coast into the nation's midsection will take aim at the Northeast on Sunday, threatening to disrupt millions over a busy holiday travel weekend after at least seven storm-related deaths have been reported.

The National Weather Service's Weather Prediction Center said the transcontinental storm system that brought blizzard conditions to the Upper Midwest will bring between 6 to 12 inches of snow from the eastern Dakotas to northern Michigan on Sunday, creating "havoc for Thanksgiving holiday travelers."

"We do have this massive storm spreading from parts of the Dakotas; we saw over a foot of snow in South Dakota yesterday," Fox News Chief Meteorologist Rick Reichmuth said Sunday on "Fox & Friends."

2 ARIZONA CHILDREN, BOTH 5, FOUND DEAD, ONE STILL MISSING AFTER VEHICLE SWEPT AWAY BY FLOODWATERS

As the storm system moves east on Sunday, it will evolve into a nor'easter-type storm off the southern New England Coast, bringing rain and wind to coastal areas and heavy snow inland lasting through Tuesday.

"All of this pulls off toward the East today," Reichmuth. "We'll start to see the rain move in across places like Philadelphia, in toward New York and Boston. Starting off maybe as a little snow, crossing over into rain and eventually back to a little bit of snow."

Inland sections of the Northeast, including portions of New York and extending eastward to southern Maine, will see between 8 to 16 inches of snow while freezing rain will present a problem for travelers in western Maryland and central Pennsylvania where ice storm warnings have been issued.

"Severe travel disruptions are likely for many of these areas," forecasters said.

Along the busy Interstate 95 corridor, travelers on area roadways and at major airports will also face some disruptions from the mix of weather that will bring rounds of rain and snow during the day on Sunday, and then on Monday as people head back to work.

"For the most part, I think coastal areas will be pretty much a rain event," Reichmuth said. "Maybe up to about an inch or so of snow. Interior up to a foot or a foot-and-a-half of snow."

The storm system has created treacherous conditions as it brought heavy snow from parts of California to the northern Midwest and inundated other areas with rain. On Saturday, authorities found the bodies of two young children, including a 5-year-old boy, and a third child was missing in central Arizona after a vehicle was swept away while attempting to cross a runoff-swollen creek. A storm-related death also was reported in South Dakota.

The storm's death toll went up on Sunday when officials in Missouri said that three people were killed Saturday when their vehicles were swept off flooded roads in Bollinger County. In a separate incident, a 48-year-old Louisiana man died.

As the storm shifts east, flight delays and cancellations are continuing to pile up -- disrupting travelers heading home after Thanksgiving.  As of 1:30 p.m. Sunday, flight-tracking website FlightAware said there were 506 canceled flights in the U.S, compared with 407 on Saturday. The airports with the most canceled flights include  San Francisco with 67 and Newark, New Jersey, with 33 according to FlightAware.

The Federal Aviation Administration said some flights heading to Newark, New Jersey, are being delayed by an average of more than 2 1/2 hours. while wind and rain are causing some arriving flights at San Francisco to be delayed an average of 4 1/2 hours. There were also dozens of delays at airports in Chicago and Minneapolis.

High winds and ice were making travel almost impossible in some other places. A 100-mile section of Interstate 80 in Nebraska and Wyoming closed Saturday morning because of high winds and blowing snow. Several other roads and highways also were closed.

As the snow reached Minnesota, the Minnesota State Patrol said there were 317 crashes reported between 10 p.m. Friday and 9:30 p.m. Saturday. Of those crashes, officials said there were 29 with injuries.

The mix of rain, sleet and snow later changing to rain has left roads appearing to be clear but still dangerous, according to state police.

"Even in this weather, people may think it's clear but it's not," Minnesota State Patrol Lt. Gordon Shank told FOX9. "There are still icy spots. It’s still slick so make sure you're not going too fast. The roads may look clear but they’re not. Don’t risk it."

While plow trucks have been out, drivers like Doug Sawyer said even driving slow in dangerous conditions can still lead to spinouts.

"I was taking a small curve in a road, going about 15 miles per hour, and the car just started to slide," he told FOX9. "I turned into the slide and it kept going and eventually spun me all the way around and I turned around in a driveway and came here and I’ll go home slower. It’s what we have to do in Minnesota."

Treacherous conditions were being reported Sunday across the Northeast, with accidents on highways in Pennsylvania, New Jersey, and New York. A photo taken on U.S. Route 209 Business shows an accident involving at least four vehicles on a bridge between East Stroudsburg and Stroudsburg, Pa.

In Massachusetts, transportation officials are warning of hazardous travel conditions by midday Sunday as a mix of heavy snow, freezing rain and strong wind gusts in Western Massachusetts arrives in the greater Boston area by 5 p.m.

During the storm, snowfall rates will be 1-2 inches per hour in many areas.

California is drenched or blanketed in snow after a powerful Thanksgiving storm. (Lee Stockwell/Big Bear Mountain Resort via AP)

MassDOT Highway Administrator Jonathan Gulliver has advised anyone who has to travel, to leave as early as possible Sunday morning.