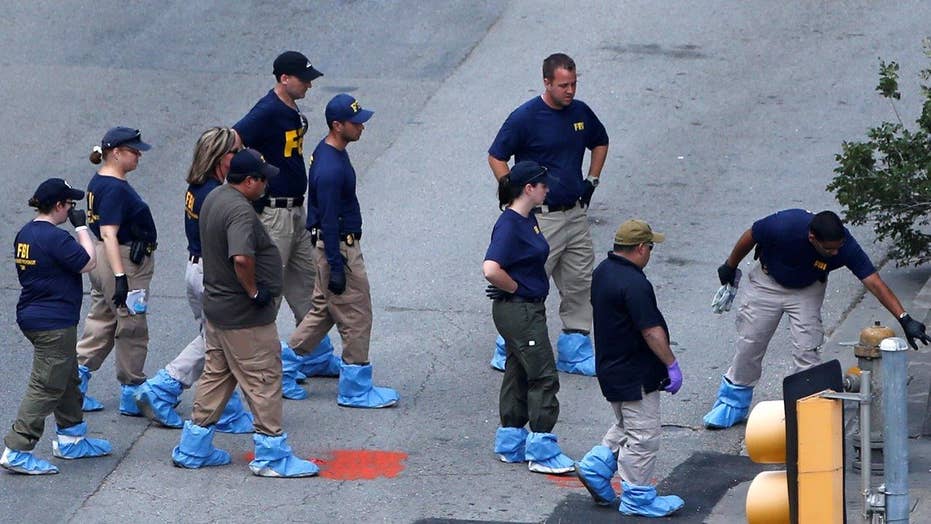 Dallas shooter wrote on wall in blood during standoff

Quanell X,leader of the New Black Panther Party, said he "excused" Johnson from the group when he espoused violence. (Associated Press)

"I knew brother, and brother had spent some time with us in New Black Panther Party nation and he also worked some security details for me in events that we had," X said in the radio interview with host Mike Patrick.

It was not clear if X considered Johnson a member of his group, but he said he told Johnson "to excuse himself" from the group about three years ago after Johnson questioned why the group was not buying guns and ammunition to fight the government.

X said he did not warn authorities and that he “could not know” that Johnson, who he called a "ticking time bomb," would perpetrate what was the most deadly attack against U.S. law enforcement since 9/11.

The Houston New Black Panther leader did not return phone calls to FoxNews.com.

The development comes as authorities probe whether Johnson, who shot 14 Dallas police officers, killing five, at a Black Lives Matter protest Thursday, acted alone or with the knowledge or help of others.

Black Lives Matter immediately disavowed the murders and no organized domestic group has claimed credit for them. The New Black Panther Party is considered a hate group by the Southern Poverty Law Center.

Police are combing through computers and electronic devices taken from Johnson's home for clues, experts said.

“The FBI will be looking at whether there was subterfuge communication,” retired FBI agent Pat Villafranca told FoxNews.com. “Was he using encryption or a gaming system? Was he just reading or was he making a secret deal?”

It is likely detectives are also analyzing voice data. In particular, a 10:30 a.m. threatening call made in Dallas on Thursday to the Harris Country Sheriff’s Office Emergency Dispatch Center from a male caller is being looked at.

“Why are y’all killing black people?” the caller asked, before pledging to "kill" police.

Since the attack, more threats have been received, including a Saturday Facebook post to a Houston law enforcement agency, calling for an unspecified police “purge.”

“Almost immediately we received death threats,” said Brown. “We are all on edge.”

A purported image of the gunman wearing a self-styled black and white keffiyeh with his gun raised overhead during a protest last summer at the Waller County Sheriff’s office has been circulating over the Internet.  However, the department did not have cause to ID anyone during the protest, so Waller County Sheriff Glen Smith could not confirm the identity appearing in the photograph.

Smith said if there was coordination between Johnson and others, it may be difficult to prove.

“From my experience, groups like the New Black Panther Party are smart,” Smith said. “They point their guns in the air and don’t look you in the eye and say ‘I’m going to kill you,’ but say ‘pigs in blanket,’ or ‘need to fry some bacon.’

“It’s a word game, but for law enforcement it’s absolutely a threat,” he added.

“The African American Defense League and the New Black Panther Party are hate groups with a long and very different record than Black Lives Matter, which is an idea, a movement,” Segal said. “It’s not even close. People should be asking if BLM wasn’t leading protests, who would be leading them? It could be worse. What group would fill the vacuum?”

The arsenal Johnson amassed in his home in the Dallas suburb of Mesquite suggested he had bigger plans, even if he intended to act alone.

“There was a large stockpile of bomb-making material,” Brown said. “He knew what he was doing.”