SHELTON, Conn. – A Connecticut Catholic school has confirmed rumors that one of its students is the 16-year-old suspect arrested in connection with a fight outside a high school party that left a young lacrosse player dead and three others injured Saturday.

"The Shelton Police Department arrested a St. Joseph High School student in relation to a fatality at a private Shelton residence on Saturday, May 14, 2022," the Trumbull, Connecticut, school announced on Facebook Wednesday. "Our entire School Community is horrified and deeply saddened by the tragic death of James ‘Jimmy’ McGrath."

No one authorized to comment from the school's main office was immediately available when reached by Fox News Digital Thursday morning.

Fairfield Prep student Jimmy McGrath and a memorial outside the home where he was allegedly stabbed. (Fairfield College Preparatory School/ Fox News)

Prosecutors have not yet released the Milford teen’s name. Sources tell Fox News Digital the case is expected to be transferred to adult court in Derby at some point, and the name will be released.

Neighbors told Fox News Digital Thursday they heard girls screaming for help just before midnight Saturday and called 911. They said they did not think any of the victims lived at the home, but believed that partygoers may have been drinking. They said about 30 cars were parked along the street and around the corner that night.

On Wednesday evening, McGrath’s lacrosse teammates at Fairfield College Preparatory School squared off against Shelton High School – where his sister is a senior. His father addressed and thanked the crowd, which showed up wearing baby blue in honor of the slain teen, instead of team colors. 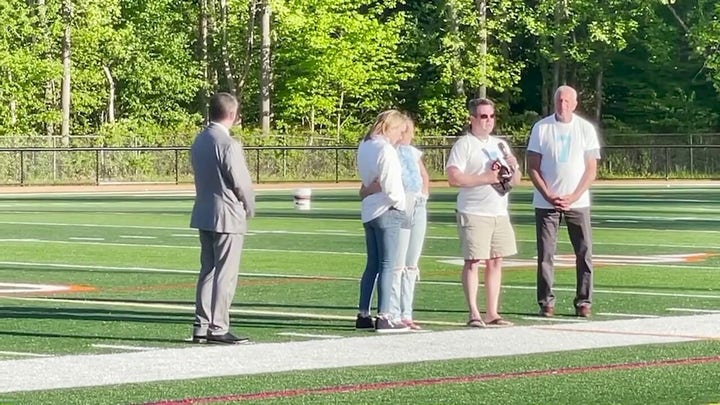 Players on both teams ran out to the center of the field to hug McGrath’s mother, father and sister before the game, and spectators in the bleachers periodically erupted in cheers supporting both teams and McGrath, in unison.

"The McGrath family requested for the Shelton-Prep game to be played to honor Jimmy with his brothers who love the sport," the father, Kevin McGrath explained in a Facebook post. "If you love lacrosse and you love Jimmy, Please support a wonderful night of life-long friends playing a game they love."

McGrath had close friends on both teams, according to parents in the crowd.

"Jimmy was just the type of kid that everyone liked," said Tony Gandalfo, who said his son Peter is a teammate on Fairfield Prep.

The Shelton Detective Bureau is still actively investigating McGrath’s killing and encouraging anyone with information about the incident to call the Shelton Police Department at 203-924-1544.