A Colorado resident is speaking out about his experience hearing and seeing debris from United Flight 328 fall from the sky and land in his yard.

"If you've ever been involved in a high speed or an automobile crash, that’s the sound we heard," Kirby Klements, who was home with his wife at the time, told "Fox & Friends" on Monday. "And all of a sudden, this big silver object just rolled in front of our front window, and we had absolutely no idea what it was from sitting there."

"And then when I stood up and opened the door, I told my wife ... ‘You’re never going to guess what this is,’" he said. "I said, ‘It’s the front cowling of a jet engine air from an airplane.’"

United Flight 328 was forced to make an emergency landing at Denver International Airport shortly after takeoff on Saturday after dropping debris over northern Colorado. The Hawaii-bound jet was a Boeing 777 with 10 crew members and 231 passengers on board, according to reports.

After seeing the debris fall, and before hearing that the plane landed safely, Klements said he was worried the entire plane would be lost.

"When I stepped outside and realized what it was, my first look was up in the sky to see where the plane was coming down, because I figured a piece that big [would mean] the plane was going to be lost," Klements told Steve Doocy. 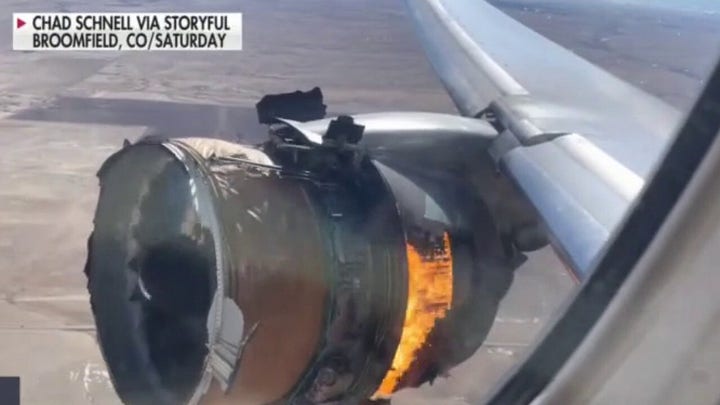 "The people on the plane, they had a good 30 or 40 minutes of terror the whole time," he added. "So I’m much more fortunate to be here on the ground, put up with the brief [worry] that we had than to be on that plane and wondering if we’re going to make it down safe or not."

Klements, who lives in Broomfield, and his family were unharmed by the incident, he said, though his son did have a close call.

"My son had just left to go to work, so he had just exited the front door maybe five minutes before that happened," Klements said.