An illegal immigrant with known gang ties has been arrested in the stabbing death of a San Jose woman; Jonathan Hunt has the details.

The San Jose police chief blasted California’s sanctuary city policies Tuesday after a previously deported illegal immigrant with a long rap sheet was arrested for murder in the brutal stabbing of a 59-year-old woman.

Chief Eddie Garcia said the murder of Bambi Larson, who was killed inside her home Thursday afternoon, demands that police and the county have an honest conversation over the refusal to honor U.S. Immigration and Customs Enforcement detainer requests for violent criminals.

“This isn’t about politics, this is about public safety,” Garcia said during a press conference Tuesday, during which he also spoke about the arrest of 24-year-old Carlos Eduardo Arevalo Carranza. “He could have been turned over six times.”

Garcia said his officers first made contact with Arevalo Carranza, who is believed to be homeless, when he was arrested for alleged methamphetamine possession. He was cited and released KTVU reported.

But DNA taken during his arrest matched samples taken from multiple locations around Larson’s home and, once he was located again by police, he was arrested on suspicion of murder.

Police said Arevalo Carranza was seen on security footage “stalking" the area near Larson’s home on the day of her murder and well as leaving the residence after the crime was committed. A connection between the two has not been determined, Garcia said. 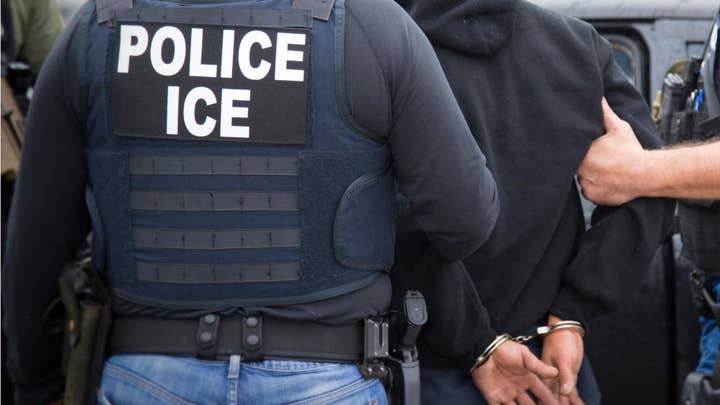 Erik Bonnar, an acting field office director for ICE, said Arevalo Carranza had been previously deported by Homeland Security from McAllen, Texas in 2013. At some point, he returned to the U.S. and has since been arrested numerous times on suspicion of committing offenses including burglary, battery, false imprisonment, possession of methamphetamine and prowling.

In the Los Angeles and Santa Clara counties, the 24-year-old had been arrested six times – the most recent for allegedly possessing methamphetamine and paraphernalia in January.

"How many more people have to be killed or injured before California lawmakers will open discussions to revise the state policy prohibiting local law enforcement agencies from working with ICE to apprehend dangerous criminal aliens?" Bonnar said in a statement. "It’s unfortunate that our communities face dangerous consequences because of inflexible state laws that protect criminal aliens. These sanctuary policies have unintended, but very real, and often tragic consequences to public safety."

Garcia said ICE had placed a detainer order for Arevalo Carranza, however, it was repeatedly ignored by Santa Clara County due to its sanctuary policies.

He said San Jose police do not request immigration status while making an arrest, but that ignoring detainers and releasing inmates from custody who have committed serious crimes undermines the city’s safety.

"The City of San Jose and our police department has no control over how the county interacts with federal immigration enforcement or deportation of violent or serious felons like Carlos Arevalo Carranza," Garcia said. "Those policies are not set at our level."

He added that asking about Arevalo Carranza’s immigration status would not have impacted the results of his arrest.

“We are here to protect and embrace our otherwise law-abiding, undocumented residents,” Garcia said. “We are not here nor should we be here to shield admitted gangsters or violent criminals regardless of immigration status.”

The Santa Clara County sheriff appeared to agree with Garcia, saying Arevalo Carranza should have remained in custody until officials with ICE had the appropriate time to evaluate his immigration status.

Border Patrol reports a 300 percent spike in family apprehensions; reaction and analysis on 'The Five.'

“It has been my long-standing position that all undocumented immigrants who are serious or violent felons, should be held for ICE evaluations,” Sheriff Laurie Smith said in a statement. “I will advocate to change the county policy to try to prevent this from happening again.”

Larson attended San Jose State University and the University of California at Santa Cruz and was a manager at medical training company Roche Sequencing Solutions in San Jose.

Editor's note: A previous version of this story stated the city was San Diego. It was San Jose.