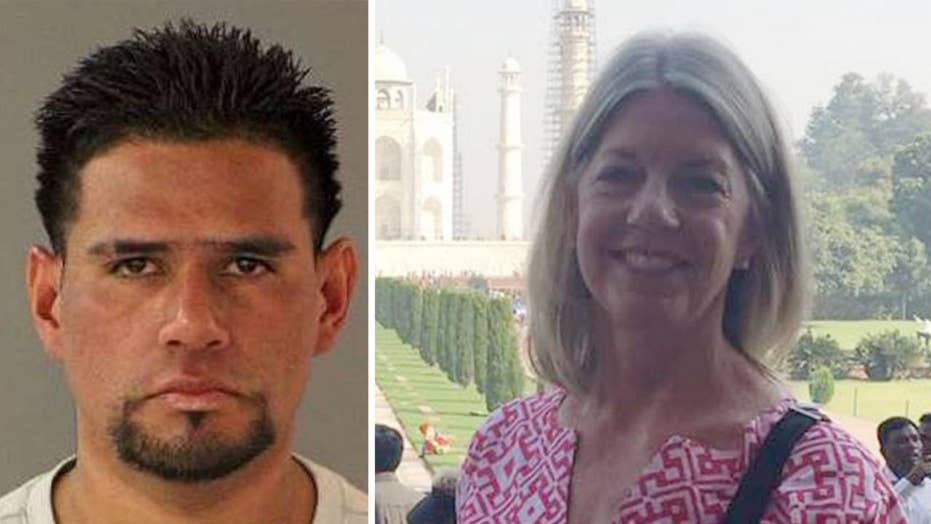 An illegal immigrant with known gang ties has been arrested in the stabbing death of a San Jose woman; Jonathan Hunt has the details.

Police in California have arrested an illegal immigrant with known gang ties and an extensive criminal history in the February killing of a San Jose woman.

Carlos Eduardo Arevalo Carranza, 24, was arrested Monday night in connection with the murder of 59-year-old Bambi Larson; police say he stalked her before stabbing her to death.

Larson, a systems manager in San Jose, did not show up for work on Feb. 28. That seemed unusual to co-workers, who phoned her son to alert him.

Larson’s son and a co-worker went to her home in the 900 block of Knollfield Way around 1:45 p.m. and discovered her body in the bedroom, San Jose Police Chief Eddie Garcia said.

Police arrived and found Larson suffering from multiple stab wounds consistent with a cutting tool, multiple lacerations to her body and blunt force trauma. They also recovered a bloodied towel and footprints from the scene near a sliding door.

U.S. could see a million illegal immigrants cross the southern border by the end of 2019

Fox News contributor Nigel Farage weighs in on the worsening migrant crisis at the U.S.-Mexico border.

Garcia said that police searched hours of video surveillance from the neighborhood and were able to find a suspect.

“The home security cameras showed an unidentified male wearing a backpack, pants and a long-sleeve sweater or shirt as he approached and later left the victim’s residence.”

MOM WHOSE SON, 23, WAS KILLED BY ILLEGAL IMMIGRANT URGES TRUMP TO KEEP FIGHTING FOR BORDER WALL

Poor video quality prevented police from making a positive ID but they were able to trace the suspect’s path and eventually found a T-shirt containing DNA from the victim and the suspect.

On March 10, a man identified as Carranza was arrested for possession of methamphetamine and was taken in by San Jose police for processing, and a DNA sample was obtained.

Because DNA results from Larson’s case had not come back yet, the connection was not made and Carranza was released.

Garcia said when the results finally came in on Monday, police tracked down and arrested Carranza, who was on probation at the time of the murder.

Police located Larson’s phone and e-reader in the suspect’s possession.

“The suspect, Carlos Eduardo Arevalo Carranza , stalked this San Jose neighborhood and his victim. He is a San Jose transient … and is a self-admitant gang member.”

Garcia declined to name the gang but listed the extensive criminal history of Carranza, who had six separate detainer requests against him via Immigration and Customs Enforcement (ICE).

According to Garcia, the suspect was detained by the Department of Homeland Security at the border in Texas and deported in 2013.

Two years later he was arrested and accused of possession of paraphernalia and convicted of burglary in San Jose. In 2016 he was arrested on charges of battery of an officer, resisting arrest and entering and occupying a property. That same year, in October, Carranza was arrested in Los Angeles on battery charges.

His final arrest before the murder of Larson was in January, on charges of possession of methamphetamine and paraphernalia.

Despite having six detainers placed on him by ICE, Carranza was never deported.

Garcia said at a press conference on Tuesday that his officers do not ask people their immigration status, and doing so in Carranza’s case would not have impacted the results.

He said: “We are here to protect and embrace our otherwise law-abiding, undocumented residents, We are not here nor should we be here to shield admitted gangsters or violent criminals regarded less of immigration status”

The San Jose Police Officers' Association issued a statement similar to Garcia’s remarks, calling the legal system “broken.” "When it comes to policing, there’s a distinct difference between a Dreamer who commits a victimless crime and a violent serial sexual predator with multiple offenses. Our society must recognize there’s a difference between someone who is trying to make ends meet for their family, and a self-admitted gang member, a monster who brutally murders an innocent woman in her own home."