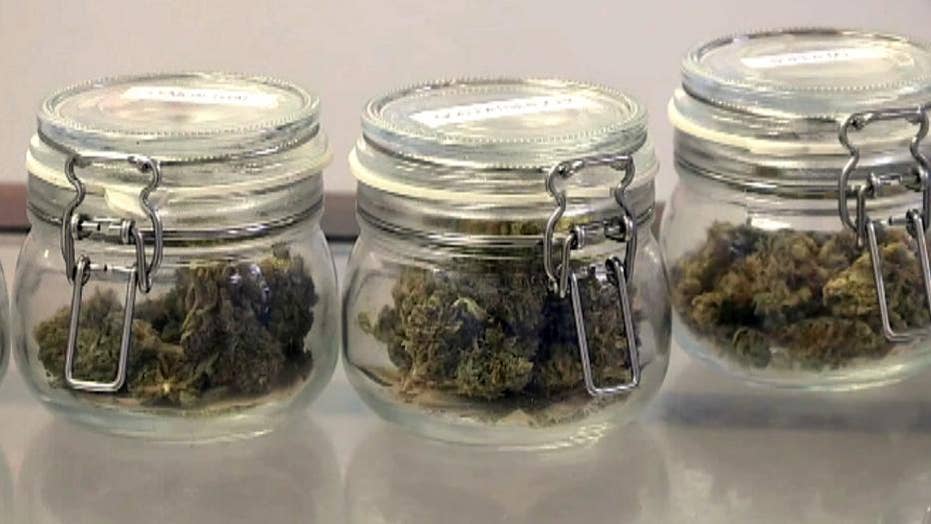 Calif. called on to create state bank for cannabis industry

California's treasurer, attorney general to move forward with plan to create a state bank amid federal prohibition on marijuana which forces dispensaries to pay taxes and other expenses in cash.

California's emerging pot industry is expected to bring in billions of dollars to the Golden State, but as of now there's no place to actually put the money.

California State Treasurer John Chiang announced Tuesday that state officials are moving forward with plans to examine creating a taxpayer-backed bank to handle the cash coming in, one that doesn't fall under control of the federal government since it still lists marijuana as illegal.

Legal pot sales started in California on Jan. 1, but most of the business is done cash-only, sometimes in tens of thousands of dollars, because banks want to avoid getting into legal trouble with the federal government.

"We all know that the lack of banking services affects government taxes and forces the cannabis industry to operate in cash," Chiang said in a statement. "This creates hardships and poses dangers to cannabis entrepreneurs, their employees and the general public."

Chiang, a Democratic candidate for governor, said the study is expected to take a year.

"We don't want to create a shadow economy, we don't want violence in local communities," he told FOX40.

A taxpayer-backed state bank still may run into risks outlined in a state report released last year, which included difficulty of getting deposit insurance, unknown start-up costs, investments likely to measure in the billions of dollars, and the probability of losses for several years or more that taxpayers would have to cover.

The report came out before the latest guidance from President Trump's administration that it may be more aggressive in terms of prosecution. Earlier this month, Attorney General Jeff Sessions rolled back an Obama-era policy that allowed legal marijuana to thrive without federal intervention. The move effectively unleashes federal prosecutors to consider bringing marijuana cases, while stopping short of ordering them to do so.

Chiang said Session's action "casts into turmoil a newly established industry that is creating jobs and tax revenues" and that California should consider going alone.

"Until the slow, clunking machinery of the federal government catches up with the values and will of the people it purportedly serves, states like California will continue to both resist, and more importantly, to lead," he said.

Chiang compared the problem in California to conditions that led to the creation of the Bank of North Dakota in 1919, which is nation's only deposit-holding, publicly owned financial institution.

At that time "private banks failed to promote agriculture, commerce and industry in the rural state, so the public bank was created," he said. The failure to meet the needs of the multibillion-dollar cannabis industry in California "could well turn out to be the catalyst that vaults public banking into a reality here."

For Lynette Davies, who runs the marijuana dispensary Canna Care in Sacramento, her cash-only business doesn't generate the kind of records other businesses gave. Everything from collecting money to paying employees and her taxes must be done completely in cash, which can be difficult and dangerous.

Davies has tried to get banking services, but told FOX40 each time she gets a letter saying banks can't do business with her because she's violating federal law by selling marijuana.

"You want to feel like you're doing something wrong?” Davies told FOX40. “Be thrown out of a bank because you sell cannabis to sick and dying patients."