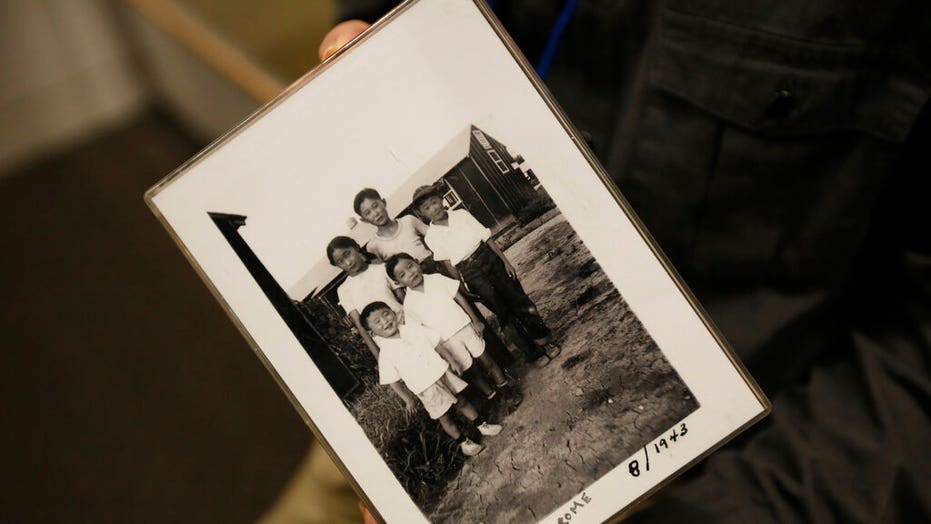 The Assembly welcomed several people who were imprisoned in the camps and their families. Several lawmakers gave somber statements and gathered at the entrance of the chamber after the vote to hug and shake hands with victims.

In this photo taken Tuesday, Feb. 11, 2020, Les Ouchida holds a 1943 photo of himself, front row, center, and his siblings taken at the internment camp his family was moved to, as he poses at the permanent exhibit titled "UpRooted Japanese Americans in World War II" at the California Museum in Sacramento, Calif. (AP)

The resolution came a day after Gov. Gavin Newsom declared a Day of Remembrance to mark when President Franklin D. Roosevelt signed an executive order in 1942 that led to the imprisonment of Japanese Americans across 10 camps in the U.S. West and Arkansas.

Two camps in the mid-1940s were in California: Manzanar on the eastern side of the Sierra Nevada and Tule Lake near the Oregon state line.

"During the years leading up to World War II, California led the nation in fanning the flames of racism," said Assemblyman Al Muratsuchi, who was born in Japan.

Today, California has the largest population of people of Japanese descent of any state, numbering roughly 430,000.

US WWII BOMBERS, MISSING FOR 76 YEARS, DISCOVERED IN PACIFIC LAGOON

Senators will take up a version of the resolution later in the year and send it to the governor to sign.

A congressional commission in 1983 concluded that the detentions were a result of "racial prejudice, war hysteria and failure of political leadership." Five years later, the U.S. government formally apologized and paid $20,000 in reparations to each victim.

Several California lawmakers noted the state's direct role in discriminating against Japanese Americans and carrying out the federal government's order to send residents to internment camps.

Pan wrote the Senate version of the resolution, which he intends to pursue after it clears a committee later this year.