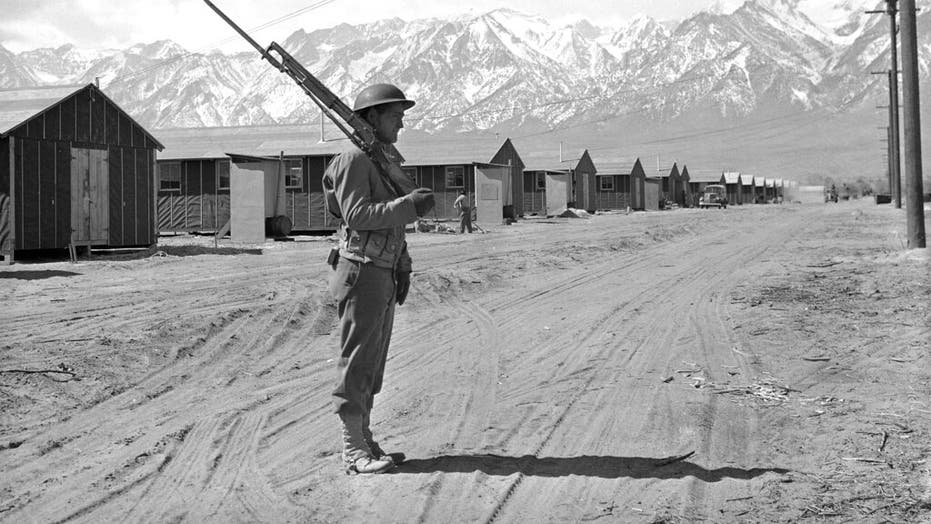 California lawmakers are expected to approve a resolution Thursday offering a formal apology for the state’s role in the internment of 120,000 Japanese Americans during World War II.

Democratic Assemblyman Al Muratsuchi, who was born in Japan and is one the roughly 430,000 people of Japanese descent living in California, introduced the resolution.

"We like to talk a lot about how we lead the nation by example," he said. "Unfortunately, in this case, California led the racist anti-Japanese American movement."

President Franklin D. Roosevelt's executive order No. 9066 establishing the camps was signed on Feb. 19, 1942, and 2/19 now is marked by Japanese Americans as a Day of Remembrance.

A congressional commission in 1983 concluded that the detentions were a result of "racial prejudice, war hysteria and failure of political leadership." Five years later, the U.S. government formally apologized and paid $20,000 in reparations to each victim.

In this May 23, 1943, file photo, an American soldier guards a Japanese internment camp at Manzanar, Calif.  (AP)

Two camps were located in the state — Manzanar on the eastern side of the Sierra Nevada in central California and Tule Lake near the Oregon state line, the largest of all the camps.

"I want the California Legislature to officially acknowledge and apologize while these camp survivors are still alive," Muratsuchi said.

He said anti-Japanese sentiment began in California as early as 1913, when the state passed the California Alien Land Law, targeting Japanese farmers who were perceived by some in California's massive agricultural industry as a threat. Seven years later the state barred anyone with Japanese ancestry from buying farmland.

SKELETON FOUND IN CALIFORNIA MOUNTAINS MAY BE JAPANESE AMERICAN FROM US INTERNMENT CAMP, AUTHORITIES SAY

The resolution, co-introduced by California Assembly Republican Leader Marie Waldron of Escondido, makes a passing reference to "recent national events" and says they serve as a reminder "to learn from the mistakes of the past."

Muratsuchi said the inspiration for that passage were migrant children held in U.S. government custody over the past year.

Les Ouchida, who was 5 years old when he and his family were taken from their home in 1942, said Japanese families like his always considered themselves loyal citizens before and after the internments. He holds no animosity toward the U.S. or California governments, choosing to focus on positives outgrowths like the permanent exhibit at the California Museum that provides an unvarnished view of the internments.

"Even if it took time, we have the goodness to still apologize," he said.