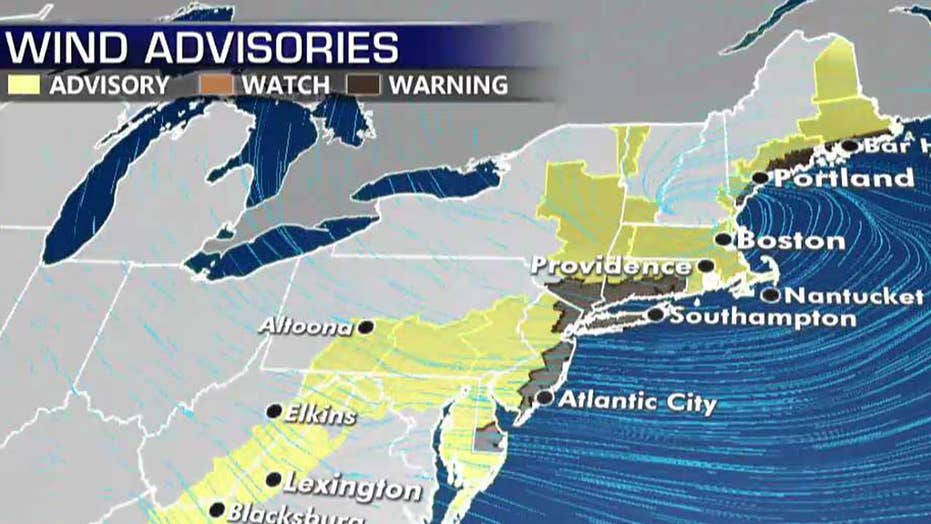 A rapidly intensifying coastal storm known as a "bomb cyclone" has brought torrential rain and gusty winds to the Northeast, causing numerous trees to be downed and leaving hundreds of thousands of residents without power.

The National Weather Services' Weather Prediction Center said the storm will continue to bring heavy rainfall, gusty winds, and the threat of coastal flooding to parts of New England through Thursday before heading into Canada by Friday. Several inches of rain fell from Washington D.C. through Boston, which has now shifted up from upstate New York through Maine.

"The story that's going to continue if you live in this region, we are under wind watches, warnings, advisories, from the Mid-Atlantic running all the way up the coast," Fox News Meteorologist Adam Klotz said on "Fox & Friends."

The "bomb cyclone" can be seen off the coast of the Northeast on Thursday. (NOAA/GOES East)

"It is breezy out here," Klotz added.

WHAT IS A 'BOMB CYCLONE'?

The storm has brought powerful winds along the coast, with a wind gust of up to 90 mph in Provincetown, Mass. reported overnight, according to the NWS.

Wind advisories and warnings stretch from the Mid-Atlantic to the Northeast. (Fox News)

"This wind, unfortunately, is going to stick with us the rest of the day," Klotz said.

Those winds have caused numerous trees to fall throughout the region, closing roads and bringing down power lines. Around 500,000 customers are without power across the Northeast, with the highest number of outages in Maine and Massachusetts, according to PowerOutage.us.

The Duxbury Fire Department in Massachusetts reported that many roads are "completely impassible" due to downed wires and trees.

Numerous schools were closed throughout the Boston area and the MBTA warned that commuter rail riders should expect "severe delays" due to so many downed wires and trees, Boston 25 reported.

The winds were so powerful in the town of Duxbury, Mass. that several dinghies were blown out of the water onto the shoreline.

Rain from the "bomb cyclone" has shifted north away from the big cities of the Northeast. (Fox News)

Game 4 of the AL Championship Series scheduled for Wednesday night was postponed a day because of poor weather, with Game 5 pushed to Friday night at Yankee Stadium and Games 6 and 7 in Houston on Saturday and Sunday, if necessary. The Houston Astros beat New York Yankees 4-1 on Tuesday to take a 2-1 series lead.

The winner will face Washington and its well-rested, talented rotation starting in the AL city on Tuesday night.

The coastal storm impacting the Northeast met the criteria to be known as "bomb cyclone," which means it rapidly intensified, dropping 24 millibars (or atmospheric pressure) over a 24-hour span, according to the National Oceanic and Atmospheric Administration (NOAA). A typical range in millibars is around 10 to 15.

Forecasters said once the storm moves out, that temperatures should be "rather cool" for October, with daytime highs as much as 10 to 20 degrees below normal.