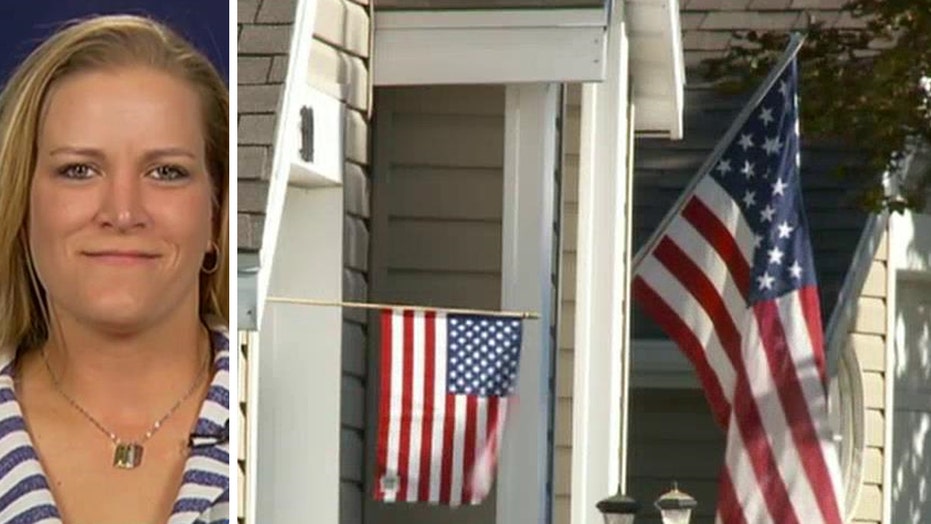 Fighting to keep US flag flying

Residents of a small Utah condominium community say they are being fined for American flag displays that their homeowners association considers “exterior decorations” that can only go up around holidays.

Erin Worthen, of Murray, says she was issued a $75 fine last week for the American flag display at her Chestnut Place residence, along with a notice from the homeowners association that said “all exterior decorations must be removed within 10 days following the holiday…Please remove your flag from the common area.”

Worthen told "Fox & Friends" Sunday she was “very frustrated and angry” at being told she can only fly the flag around holidays. Her father and grandfathers were Navy veterans and she said it has meant a lot to her to be able to display the flag every day.

“It means to me that the men and women who serve our country do a job that I know that I could not do,” she said. “It’s just my way of saying thank you to them and honoring their sacrifice that they do every day -- day in and day out -- and not just on holidays.”

The president of the homeowners association told Fox 13 in Salt Lake City Thursday that she was tired of seeing flags, not just the American flag, flying up and down the street all day and all night, 365 days a year.

“Flags are flown on holiday events,” Lyn Steinbergen told the station. “All we’re trying to regulate is when they go up and why they go down.”

Worthen said the majority of residents in Chestnut Place, which consists of 60 homes, are behind her.

“I’ve talked with more than half of them and they’re all in support,” she said.

Worthen attempted to confront Steinbergen and other members of the homeowners association board at a meeting Thursday, Fox 13 said. But the meeting was canceled at the last second.

A lawyer for the board said the absence of one board member forced the cancelation.

“I have a legal right to fly my American flag and there’s not a damn thing you can do about it,” Worthen told board members after they voted to cancel the meeting, according to the station.

Worthen and others are considering their next step, which could include hiring a lawyer to take the matter to court.