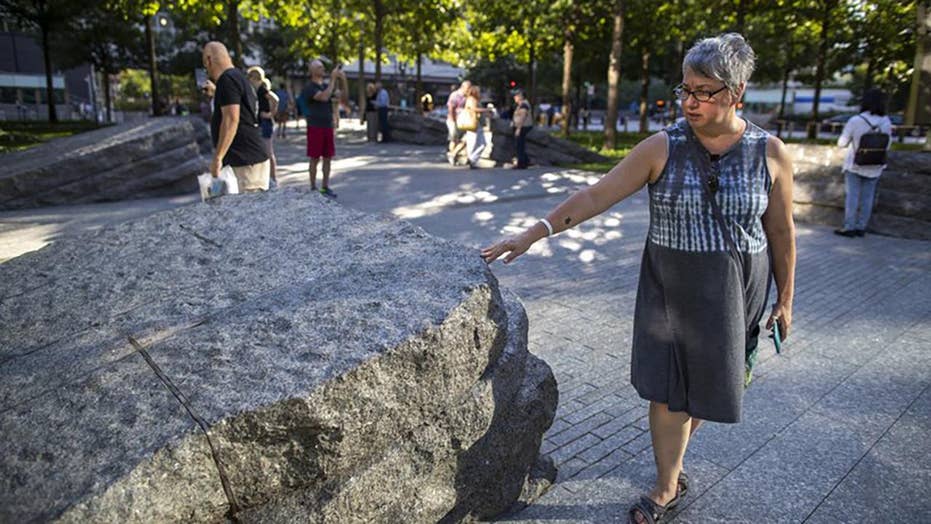 Eighteen years after the Tuesday morning President Trump says "is seared into our soul," the nation paused to solemnly mark the events of the 9/11 terror attacks and the nearly 3,000 people who were lost – but never forgotten.

Morning ceremonies were held Wednesday at Ground Zero, the Pentagon, and at the Flight 93 National Memorial near Shanksville, Pa. And this year is the first time the names of each are being read in the presence of a new, bittersweet section of the 9/11 Memorial -- one honoring the growing list of first responders who've passed away from illnesses diagnosed in the aftermath of the attacks.

“For every American who lived through that day, the September 11 attack is seared into our soul," Trump said during a ceremony at the Pentagon. "It was a day filled with shock, horror, sorrow and righteous fury.”

He added: “For the families who join us, this is your anniversary of personal and permanent loss. It’s the day that has replayed in your memory a thousand times over: the last kiss, the last phone call, the last time hearing those precious words 'I love you'."

Trump, a native New Yorker, said he and first lady Melania Trump are "united" with the survivors "in your grief."

"We come here in the knowledge that we cannot erase the pain or reverse the evil of that dark and wretched day, but we offer you all that we have: our unwavering loyalty, our undying devotion and our eternal pledge that your loved ones will never, ever be forgotten," he said.

RUDY GIULIANI REVEALS WHAT HE SAID ABOUT BIN LADEN TO GEORGE W. BUSH AFTER 9/11

This morning, the names of each victim at the Pentagon were read aloud, followed with the ringing of a bell. Former President George W. Bush is also expected to lay a wreath at the Pentagon this afternoon, while Vice President Pence will attend a ceremony at the Flight 93 National Memorial near Shanksville, Pa.

Following the annual reading of names in Manhattan, the Port Authority -- the owner of the original World Trade Center -- will be holding an interfaith remembrance service at nearby St. Peters’ Church.

Farther north, the largest free-flying American flag in the world, which weighs 450 pounds and measures 60 by 90 feet, will be greeting drivers on the George Washington Bridge. And in the evening, the Tribute in Light beams that emanate from near Ground Zero will be visible up to 60 miles away.

The 9/11 Memorial Glade, which opened in late May, pays tribute to the more than 2,000 firefighters, police officers, federal agents and other first responders who have died after inhaling toxic fumes during recovery efforts and when clearing rubble at the scene.

The exhibit – just steps away from the reflecting pools -- features six granite monoliths, each weighing 13 to 18 tons, inlaid and bound with strips of World Trade Center steel. The stones point skyward, crafted to look bruised, not broken, as a testament to the strength of the human spirit after the tragedy, the architects told Fox News earlier this year.

A visitor touches one of the granite slabs at the 9/11 Memorial Glade in New York City. When the names of nearly 3,000 Sept. 11 victims are read aloud today at the World Trade Center, a half-dozen stacks of stone will quietly salute an untold number of people who aren’t on the list. (AP)

“Here we honor the tens of thousands / From across America and around the world / Who came to help and to heal / Whose selflessness and resolve / Perseverance and courage / Renewed the spirit of a grieving city / Gave hope to the nation / And inspired the world,” reads an inscription at one end of the Glade.

It opened on May 30 -- the 17th anniversary of the official end of the rescue-and-recovery efforts that followed the 9/11 attacks.

But the number of those who have died from 9/11-related illnesses is expected to climb over time, the Centers for Disease Control and Prevention's World Trade Center Health Program says.

In this year alone, those illnesses have claimed the lives of six police officers, the most recent being Cayuga County Undersheriff Stephen McLoud, who passed away from cancer just before Labor Day weekend, according to the Officer Down Memorial Page.

Smoke rises from the burning twin towers of the World Trade Center after hijacked planes crashed into the towers in New York City on Sept. 11, 2001. (AP)

In June, William Leahy, an officer with the Port Authority of New York and New Jersey Police Department, also passed away from cancer, which he was diagnosed with in the wake of the attacks.

“[He was] tough as nails and always got the job done,” Lt. Daniel Rhein told the New York Daily News. “At the same time, he would call his mother every day.”

At the opening of the 9/11 Memorial Glade, Caryn Pfeifer, whose firefighter husband Ray Pfeifer died of cancer in 2017, described the area as a “beautiful place for our heroes.”

She told The Associated Press that right after the World Trade Center towers fell, Ray “spent the next nine months searching and digging at Ground Zero without being asked, without being told, and without thinking about the consequences.

“But there were consequences,” she added. “There was illness and pain and death and for Ray that meant his guys and their families were in trouble.”

To date, only two men have been tried and sentenced in connection to the Sept. 11 attacks, leaving victims’ families increasingly frustrated.

Yet as this 18th anniversary comes, the trial of Khalid Sheikh Mohammad, the alleged mastermind, is inching closer. He and four other men will face war crimes charges at the U.S. military base in Guantanamo Bay, Cuba beginning in early 2021, a military judge said Friday.

As for today though, America continues to remember the lives lost as a result of 9/11 -- and those who have defended freedom in its wake.

“Since September 11, nearly 6 million young men and women have joined the United States armed forces. They have crossed seas, climbed mountains, trekked through deserts and rushed into enemy compounds to face down the threat of radical Islamic terrorism," Trump said during his speech at the Pentagon. "Nearly 7,000 service members have laid down their lives to protect our home, our flag and our American way of life."

"American freedom," he says "survives only because there are patriots willing to sacrifice everything in its defense.”