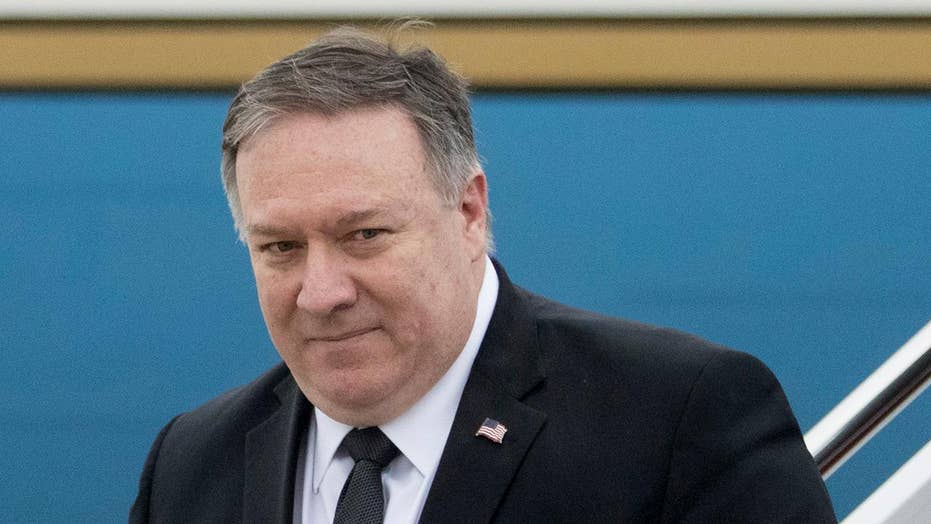 Pressure is mounting for Secretary of State Mike Pompeo to throw his hat into the ring for the open Senate seat in Kansas in 2020 – at least in Washington, D.C.

Senate Majority Leader Mitch McConnell, R-Ky., is reportedly pursuing Pompeo to run for the seat which will be vacated by retiring GOP Sen. Pat Roberts. And Indiana Sen. Todd Young, the new National Republican Senatorial Committee chair, had nothing but praise for Pompeo in a recent interview.

“Let me put it this way: it’s certainly his decision,” Young told radio host Hugh Hewitt before mentioning the various capacities in which he’s worked alongside Pompeo. “I can conceive of no one who I’d rather work with in the United States Senate from the state of Kansas than Mike Pompeo.”

Some Kansas Republicans have already touted Pompeo as an alternative to the controversial former Kansas Secretary of State Kris Kobach who lost his bid for governor in the 2018 midterm elections. He has said he’s seriously considering running for the Senate seat.

“There is enormous respect for [Pompeo] across the spectrum in Kansas,” said consultant David Kensinger, who has ran successful campaigns for Roberts and former Gov. Sam Brownback. “We’ve already paid a great price with Kobach when he ran for governor.”

“The country has never needed Kansas to do the right thing more.”

“The country has never needed Kansas to do the right thing more,” Kensinger told Fox News.

“Kris Kobach in the general election would be a major problem that Republicans are wisely trying to avoid,” Scott Paradise, a GOP consultant, told The Kansas City Star. “Pompeo would immediately take this race off the board.”

As Fox News previously reported, Pompeo, 55, seems to be at least considering running for Senate as he reportedly met with veteran Republican strategist Ward Baker to discuss a potential campaign earlier this week.

Pompeo was initially tapped to be Trump’s CIA director but was selected last year to replace Rex Tillerson as secretary of state. A former congressman from Kansas, he is the first CIA director to lead the State Department.

“For all the national attention [Pompeo] is getting, in Kansas, he is not scaring anybody out of the race at this point.”

— Patrick Miller, a political science professor at the University of Kansas

A departure from Trump’s Cabinet would be seen as a significant loss to the president who has come to increasingly rely on him.

But even without a firm commitment one way or another from Pompeo, Patrick Miller, a political science professor at the University of Kansas, said the excitement surrounding the secretary of state might be premature.

“It’s so rare that we actually have an open Senate seat in Kansas. When we do have those they draw a fair deal of attention, particularly on the Republican side,” Miller told Fox News. “There’s a pretty deep Republican bunch with a lot of pent-up ambition who would like to move up the political ladder.

“For all the national attention [Pompeo] is getting, in Kansas, he is not scaring anybody out of the race at this point,” he added. “We have some candidates who are already in the race who are showing no signs of deference to Mike Pompeo and his interest in the race.”

While Democrats did make inroads in Kansas during the 2018 midterm elections – capturing both the governorship and a congressional seat – Republicans are still very much favored to maintain the Senate seat vacated by Roberts. The nonpartisan Cook Political Report currently has the 2020 Senate race in the state going “likely Republican.”