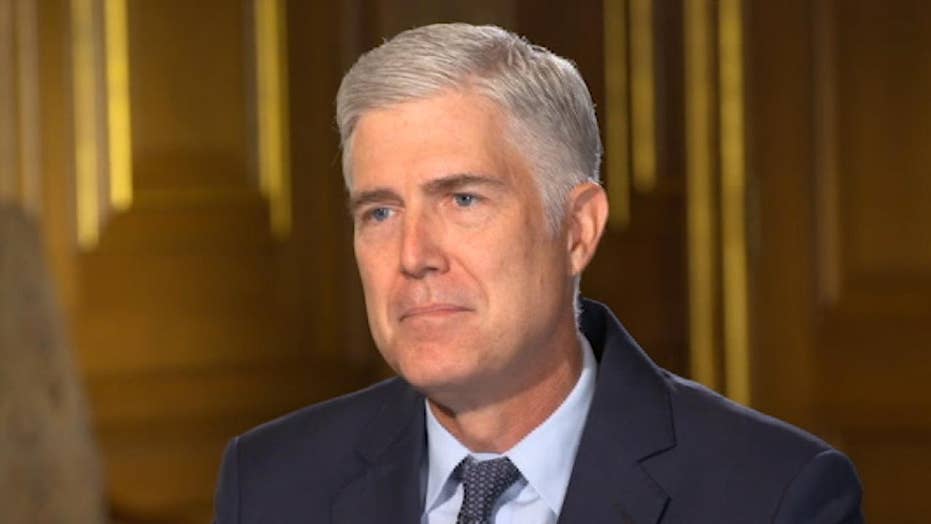 In an exclusive interview, Supreme Court Justice Neil Gorsuch gave Fox News some insight into how he and his clerks handle the weight of public opinion while serving on the nation's highest court.

Gorsuch, an originalist, has embraced a judicial philosophy that limits Constitutional rights to those outlined during the nation's founding and insists that additions to the document should come through the consent of the American people.

"Originalism says the rights of the Constitution that were given in 1789 are the rights you enjoy today and they can never be taken -- and if you want to add to them, we the people add to them," Gorsuch told Bream.

Left-leaning advocates have often pushed a judicial philosophy that supposes the founders couldn't have foreseen circumstances that might alter the meaning of the text they initially wrote.

When Bream asked Gorsuch about that argument, he called it "baloney." "I think the Constitution is one of the greatest documents in all of human history and deserves our respect -- and if you want to change it, don't ask five people in Washington to change it for you," he said, referring to the slim majority needed for Supreme Court decisions.

"There's a process -- it's called the amendment process. It's actually there in the Constitution and you can do it -- and it has been done. It's been done 27 times."

Gorsuch's confirmation was especially contentious given that he was replacing former Supreme Court Justice Antonin Scalia, a staunch originalist who died just before the 2016 election.

Gorsuch, who was close with Scalia before his death, recalled how the former justice inspired him to follow that judicial philosophy.

"In law school, I never heard the word originalism from a professor," he told Bream. "And then I remember Justice Scalia coming to speak -- I was a student at [Harvard] law school -- and he talked about originalism in the Constitution and it really had a profound effect on me,"