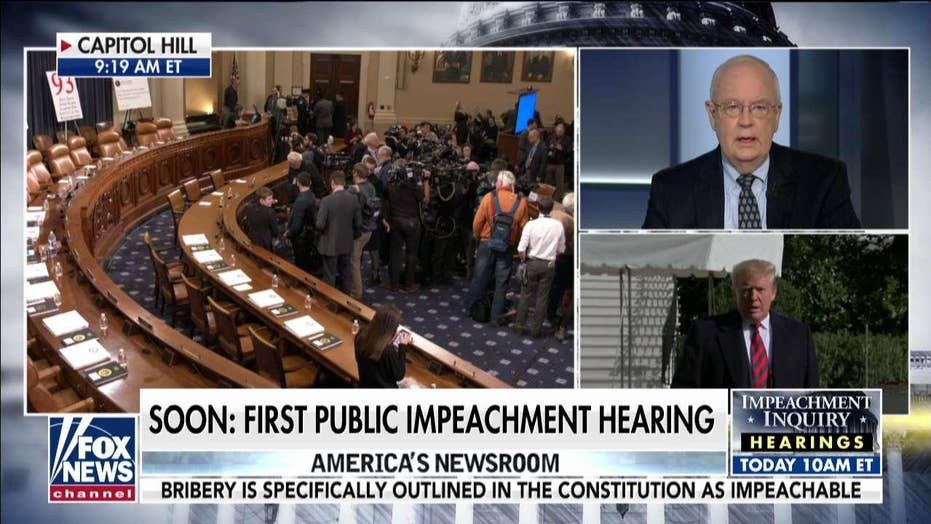 John Dean is a former attorney who served as White House counsel for President Richard Nixon from 1970 until 1973. He is best known for his role in the cover-up of the Watergate scandal and subsequent testimony to Congress as a witness.

On Wednesday, House Democrats set in motion the first public hearing involving the potential impeachment of a president since Nov. 19, 1998.

The first witnesses chosen are Ambassador Bill Taylor and career Foreign Service officer George Kent -- both of whom have already testified behind closed doors. In addition, former U.S. ambassador to Ukraine Marie Yovanovitch is set to testify Friday.

Speaking on "America's Newsroom" with host Bill Hemmer, Starr said Taylor "has the disadvantage of not having had a communication with the president."

He noted that the fact Democrats' depositions have been closed-door thus far "does not speak well."

In an appearance on "Hannity," South Carolina Sen. Lindsey Graham said that he thought further legitimizing "what's going on in the House" would be a "danger to the presidency in the future."

Starr said that he thought Graham was correct in his assertion.

"I think Sen. Graham is onto something broader and that is we're dealing with the context of the foreign relations of the United States. The give and take of foreign relations," he said, though noting that "doesn't justify bribery or however it's going to be characterized."

Starr said that we are living in "this culture of impeachment," but that we need to "find a better way to hold the executive accountable."

He added that the president's dealings with Ukrainian President Volodymyr Zelensky do not seem like bribery.

"To the person on the street, this is going to seem like a stretch," he told Hemmer.