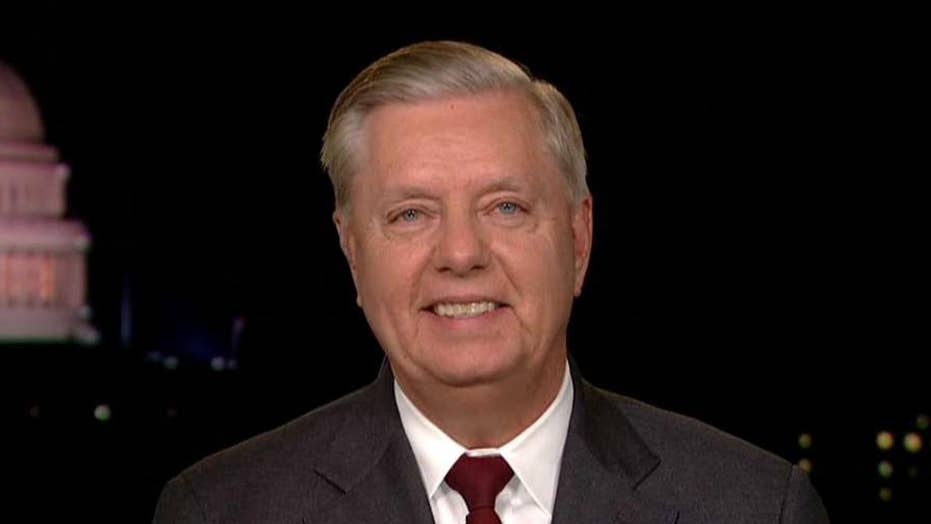 Lindsey Graham looks ahead to the start of impeachment proceedings

Lindsey Graham looks ahead to the start of impeachment proceedings

Sen. Lindsey Graham, R-S.C., said the Trump impeachment inquiry, as constructed, is a threat to the presidency and should not be legitimized.

Graham told "Hannity" on Tuesday the allegation President Trump engaged in a quid pro quo with Ukrainian officials is also not true.

"I think it would be a danger to the presidency in the future for us to legitimize what's going on in the House," he said.

Graham was referring to the situation that, to-date, has not allowed Trump or members of his administration to engage in proceedings. House Intelligence Committee Chairman Adam Schiff, D-Calif., has also not yet approved Republicans' request to have the whistleblower testify publicly.

Speaking with Sean Hannity, Graham said every American -- including the president of the United States -- has the right to confront their accuser.

"That's not being done in this case, so I don't want to legitimize this because it's a threat to the presidency," he said.

He added he did not believe there was evidence confirming allegations lodged against Trump relating to Ukraine.

"The allegation is that Donald J. Trump withheld aid to Ukraine unless the Ukrainian government investigated Joe Biden and Hunter Biden for corruption," he said.

"The problem with that allegation is that it's not true. The aid was delivered to the Ukrainian government and there was no investigation of Hunter Biden and Joe Biden."

In addition, Graham remarked that the Trump proceedings are not the first impeachment investigation he's been a part of.

In the late 1990s while serving as a U.S. congressman from Upstate South Carolina, Graham was involved in House proceedings against then-President Bill Clinton.

"Yeah, I've done this before," he remarked.