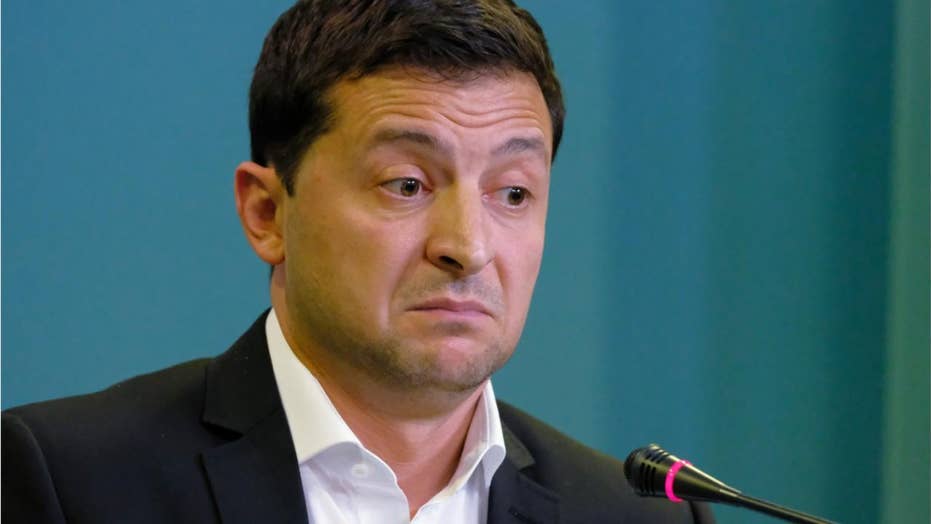 Ukraine’s president says 'no blackmail' in phone call with Trump

Ukrainian President Volodymyr Zelensky says there was 'no blackmail' in his July phone call with President Trump.

Zelensky spoke at a daylong event with media inside a Kiev food market, and said he believes the transcript released by the White House is accurate and that he knew the U.S. had withheld $400 million in military aid due to concerns about corruption and concern for American "taxpayer money." But the issue, he said, was never linked to Trump's desire that Kiev rekindle an investigation into an energy company with ties to former Vice President Joe Biden's son, Hunter Biden.

"There was no blackmail," Zelensky said. "They blocked this money and nobody asked us [for] anything,"

Trump responded to Zelensky's comments Tuesday by tweeting: "The President of the Ukraine just stated again, in the strongest of language, that President Trump applied no pressure and did absolutely nothing wrong. He used the strongest language possible. That should end this Democrat Scam, but it won’t, because the Dems & Media are FIXED!"

He also continued to draw attention to Hunter Biden's past business dealings, saying, "Where is Hunter Biden? He has disappeared while the Fake News protects his Crooked daddy!"

In his comments Thursday, Zelensky also told reporters his country will "happily" investigate whether Ukrainians interfered in the United States’ 2016 elections – a topic Trump also broached with him during his July phone call with the leader.

Zelenskiy said "we can't say yes or no" as to whether there was any interference without an investigation.

A whistleblower's claim that Trump implied in the July 25 phone call that restoration of the aid would be conditioned on Ukraine reopening a probe of Burisma Holdings and the Bidens' involvement in the matter has prompted Democrats in the House to launch an impeachment inquiry. On Tuesday, Fox News contributor John Solomon reported that the Ukrainian government had already ordered a reopening of the probe of Burisma Holdings months before the two presidents spoke by phone.

The military aid was later released to Ukraine, and President Trump has denied the whistleblower's claims. The White House has also refused to cooperate with what it claims is an unconstitutional impeachment effort by House Democrats.

The White House sent an eight-page letter to House Speaker Nancy Pelosi, D-Calif., on Tuesday that read: "President Trump and his administration reject your baseless, unconstitutional efforts to overturn the democratic process. Your unprecedented actions have left the president with no choice.

"In order to fulfill his duties to the American people, the Constitution, the Executive Branch, and all future occupants of the Office of the Presidency, President Trump and his administration cannot participate in your partisan and unconstitutional inquiry under these circumstances."

Zelensky, a 41-year-old actor, comedian and screenwriter elected in May, has sought to reverse his country's image as a hotbed of corruption. He told reporters Thursday that the main purpose of his conversation with Trump was to set up a meeting with the American president and show reform measures were in place in Ukraine.

"We just wanted to establish relations," he said, adding at one point, "the story with Burisma has nothing to do with weapons."

Trump and other Biden critics question how Hunter Biden, who reportedly knew little about the energy business and the country, ended up on Burisma’s board while his father was vice president and spearheaded Ukraine relations under President Barack Obama. The elder Biden was later recorded bragging about how he pressured Ukraine to oust a prosecutor who had been looking into the company's founder, though Biden allies say this intervention was driven by corruption concerns.

It is unclear how much money Hunter Biden made while serving on the board of the firm, but reports have estimated he made up to $1 million per year.