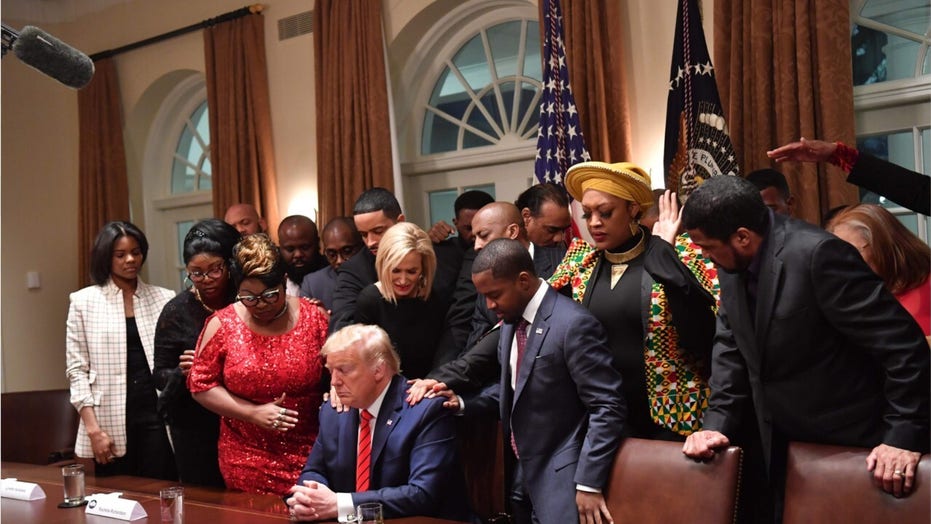 The suprising admission occurred during a White House affair attended by black community leaders. Jack Brewer, a former NFL safety made the comment just before the event ended.

CNN commentator Angela Rye shamed black Trump supporters Thursday, arguing that they credit the president for improvements in their community while ignoring the more substantial work of others.

"You want to give Donald Trump kudos for throwing Cheez-It bits at you and then criticize the people who have spent their careers doing things for the betterment of black people and black society," Rye said. "And I would just say at that point if you still go over to Donald Trump after that: Shame on you."

Her comments came as the Trump campaign announced a new initiative designed to drive black support for the president. Katrina Pierson, a senior adviser to the campaign, called the move "woke," prompting laughter from Rye.

"I think that I'm 'sleep,'" Rye told CNN anchor Don Lemon. "And I think that the good news is that a number of us have kind of stopped saying 'woke,' so welcome to the party, y'all, but now we're asleep on that."

She added that black people should look themselves "in the mirror" and ask whether they wanted to get behind Trump's prominent black supporters like Pierson.

"Like, who the hell are these people?" she asked, referring to Pierson and others.

"Donald Trump does not have a tremendous record to stand on as it relates to criminal justice reform," Rye added. "He has one bill passed and a strategy that has not served black and brown people for years from before his election."

Rye also claimed that Trump didn't have a strong record on black unemployment, saying: "He has Barack Obama's record to stand on with that."

In response to Rye, Pierson tweeted: "When people get too far out of line - the Overseers are usually replaced by the Divers. Democrats are losing control of the black vote - so expect more of this crazy. ⁦@BlackVoices4DJT is here because ⁦⁦@realDonaldTrump is⁩ #winning 4 us

Black Trump supporters like Pierson have faced public criticism before. Former Sen. Claire McCaskill received a wave of backlash earlier this month after she appeared to single Housing and Urban Development Secretary Ben Carson out for his race.

"One of these things is not like the others," McCaskill, now a political analyst for NBC News and MSNBC, tweeted alongside a photo of Carson on an airplane with other Trump surrogates. "Hint: they made him squat in the aisle so he was visible."

"Only a closet racist would make such an incredibly stupid and non factual [sic] observation," Pierson tweeted. "There were several 'things' on that plane. TWO OTHERS IN THAT ROW! You’re trying too hard, but don’t worry... You’ll see us soon in a town near you."