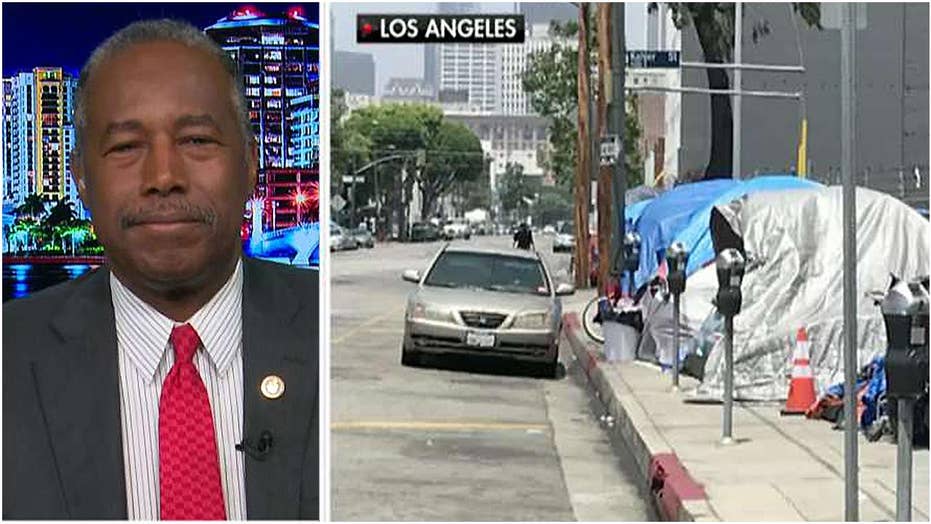 Former Sen. Claire McCaskill received a wave of backlash on Tuesday after she appeared to single Housing and Urban Development Secretary Ben Carson out for his race.

"One of these things is not like the others. Hint: they made him squat in the aisle so he was visible," McCaskill, now a political analyst for NBC News and MSNBC, tweeted alongside a photo of Carson on an airplane with other Trump supporters.

Prominent Trump supporters, including one of his top African American advisers, fired back.

Katrina Pierson, a black woman who serves as a senior adviser for Trump's campaign, tweeted: "Only a closet racist would make such an incredibly stupid and non factual [sic] observation. There were several 'things' on that plane. TWO OTHERS IN THAT ROW! You’re trying too hard, but don’t worry... You’ll see us soon in a town near you."

The president's oldest son also blasted McCaskill, clarifying that Carson didn't have a seat in the photo because he was in first class.

McCaskill lost her bid for reelection to Sen. Josh Hawley, R-Mo., in 2018. She was unrepentant amid the backlash, tweeting: "Ummm. Pretty sure pointing out a lack of diversity is not racist. Sorry Trump world."

But many disagreed, tweeting that the former senator's comments were racist.

This wasn't the first time Carson was targeted for his race. For example, the short-lived NBC comedy "Marlon" suggested Carson was a "sell-out" for supporting Trump.

“I mean, do you wanna be Dr. Martin Luther King or Dr. Ben Carson? Do you wanna be Rosa Parks or Omarosa? Do you wanna be Mrs. Dash or Stacey Dash?” asked a character in the show. "The View" co-host Sunny Hostin also seemed to single Carson out last year when Trump feuded with late Rep. Elijah Cummings, D-Md.

"When you are silent in the face of racism, you are complicit in that racism and I strongly believe that," Hostin said on "The View." "I'm calling out Ben Carson, who spent the majority of his career in West Baltimore."

In the new documentary "Created Equal," Supreme Court Justice Clarence Thomas remarked on the treatment he and Carson received as African-American conservatives.

"There's different sets of rules for different people," he says in a preview clip released in October. "If you criticize a black person who's more liberal, you're a racist whereas if you can do whatever to me -- or now, Ben Carson -- and that's fine because you're not really black because you're not doing what we expect black people to do."

Carson has repeatedly defended President Trump from accusations of racism and bigotry, saying last summer: "I have an advantage of knowing the president very well, and he's not a racist and his comments are not racist."

Carson had not responded via Twitter before publishing time. MSNBC did not immediately respond to Fox News' request for comment.