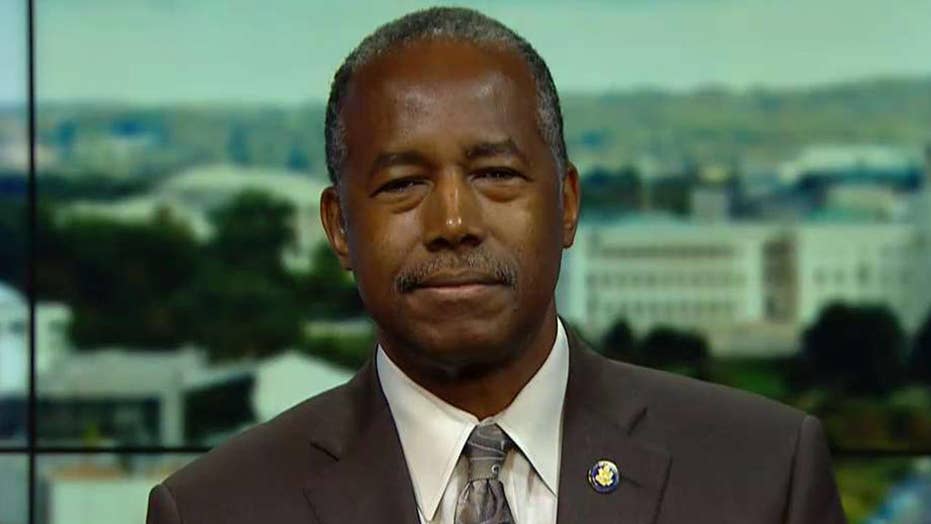 President Trump is not racist and neither are his comments on progressive Democrat congresswomen, Housing and Urban Development Secretary Ben Carson says.

Housing and Urban Development (HUD) Secretary Ben Carson defended President Trump from charges of racism Wednesday, saying the Commander-in-Chief is not a racist and loves his country.

"I have an advantage of knowing the president very well, and he's not a racist and his comments are not racist," Carson said on "America's Newsroom."

"But he loves the country very much and, you know, he has a feeling that those who represent the country should love it as well."

The former neurosurgeon was referring to Trump's Sunday Twitter spat with the four progressive House Democrats known as "the squad." Trump didn't directly refer to them by name at first, but it quickly became apparent he was targeting Reps. Alexandria Ocasio-Cortez, D-N.Y., Rashida Tlaib D-Mich., Ayanna Pressley, D-Mass., and Ilhan Omar, D-Minn.

Carson said Trump's policies speak for themselves and have lifted minorities out of poverty by expanding employment opportunities and providing affordable housing. He also said a racist wouldn't be interested in helping poor, minority communities whatsoever.

"Look at his policies, you know, under this president you see the rising tide lifting all boats. You see low unemployment ... record-low for blacks, for Hispanics ... for all the demographics of our nation," he said.

The former presidential candidate touted the administration's support for "opportunity zones," which he spoke about alongside Trump at a cabinet meeting Tuesday.

"What's happening in some of these places is just astonishing. And talking to some of those people there ... they say I didn´t think this could ever happen," said Carson.

"And just a couple of weeks ago, the president signed an executive order establishing a council on eliminating the barriers to affordable housing. Who's going to benefit from that? So when you have somebody who's spending this much time and this much effort, trying to elevate those who are vulnerable and who are suffering in our society -- I think we should pay a lot more attention to what they are doing than what anybody is saying."

Carson also decried the idea of victimhood and said the beauty of America is the ability to overcome financial struggles to rise up and be the best you can be.

"I have to look at my own situation, born and growing up in dire poverty with a lot negativity around me, but also, recognizing that I lived in a place where, you know, through the help of my mother, who helped me to realize that I wasn't a victim, that I had access to all kinds of things. And [I] was able to go on, become a neurosurgeon, now a cabinet member, and these are things that we want people to recognize in our nation and that's why we want to create opportunities for them," he said.

"All the policies that we're now espousing deal with creating self-sufficiency in people and in those people who cannot become self-sufficient, making sure that we take care of them in the most efficient and effective manner."


Nick Givas is a reporter with Fox News. You can find him on Twitter at @NGivasDC.