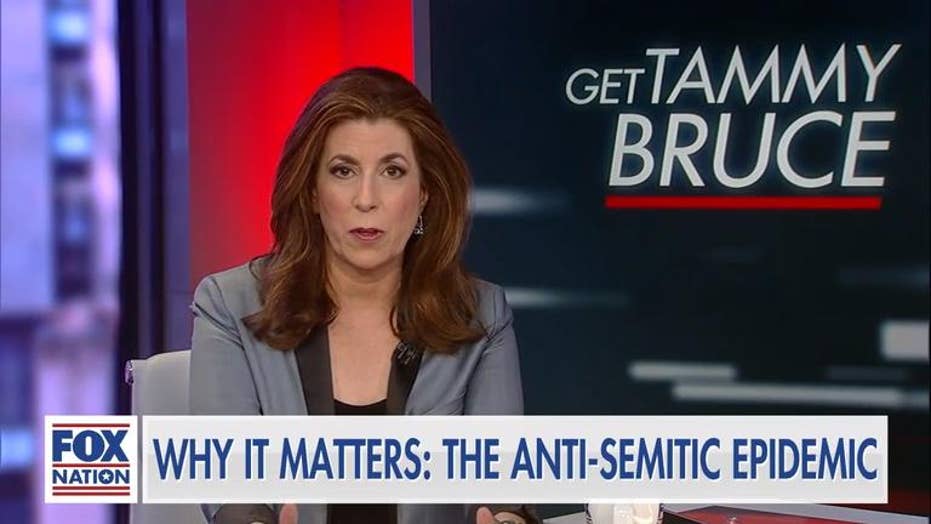 Fox News political contributor and Fox Nation host Tammy Bruce warned that Democrats won't be able to address an apparent epidemic of anti-Semitic violence in New York until they stop falsely blaming President Trump and look inside their ranks.

"What's been happening lately has been extraordinary," said Bruce in reference to an alarming series of proven and alleged hate crimes against Jewish New Yorkers over the past several weeks.

The most recent attack occurred on Dec. 28, the seventh night of Hannukkah, when a 37-year-old man armed with a machete burst into the home of a rabbi in Monsey, N.Y., and wounded five people. On Monday, the suspect, Grafton Thomas, was charged with federal hate crimes.

"Jew hatred is not something that is new around the world or even in this country. Anti-Semitism has always been an issue. We've seen it growing over the last several years," continued Bruce on her Fox Nation show "Get Tammy Bruce."

However, Bruce observed that after a string of incidents in the New York metropolitan area, a predominately Democratic region of the country, "there's been no real discussion about the nature of why this is happening."

On Dec. 10, two people associated with the anti-Semitic Black Hebrew Israelites Movement killed a police officer and attacked a kosher supermarket in Jersey City, where they murdered three people.

In the immediate aftermath of the incident, Rep. Rashida Tlaib, D-Mich, blamed "white supremacy" in a tweet. Tlaib later deleted that message when the facts of the case became clear, but Bruce noted that many recognized Tlaib's tweet to be an "effort to move ahead a particular narrative – that the Democrats have been moving constantly – which is that white supremacism is the issue in the country, that the president is a white supremacist, that Americans are ... etcetera, etcetera."

According to Bruce, some Democrats' apparent inability to directly address this new wave of anti-Semitic attacks did not stop there.

"After the machete attack at the rabbi's home, immediately, almost universally... [Democrats] all at the same time came out on social media and otherwise to blame –  wait for it – Donald Trump."

New York City Mayor Bill De Blasio appeared on "America's News HQ" one day after the attack in Monsey and appeared to point the finger at the president.

"An atmosphere of hate has been developing in this country over the last few years," said De Blasio. "A lot of it is emanating from Washington and it's having an effect on all of us."

The Washington Post ran a headline on Dec. 29 reading, "Some Democrats urge Trump to more strongly condemn anti-Semitism in wake of Monsey attack," while noting that the president immediately condemned that stabbing.

"This is a remarkable but not really necessarily surprising turn of events because this is at the heart of the problem for the Democrats is that they can't deal with an issue unless it fits within a parameter of moving along their preferred narrative," said Bruce. "Their preferred narrative now is that white supremacists are ruining America and that the president is one of those white supremacists."

"His family, of course, is Jewish," she noted. "His grandchildren are Jewish. His daughter is Jewish."

"This is a man with a personal and political commitment to the Jewish community, stronger than, may I say, than any modern president before," argued Bruce pointing to the president's decision to move the U.S. Embassy in Israel to the city of Jerusalem.

Instead of blaming the president, Bruce urged the Democratic Party to examine their own associations and rhetoric regarding Jews and the state of Israel.

Specifically, Bruce raised concerns over the controversial leader of the Women's March, Linda Sarsour. The Women's March is a protest movement that developed in the run-up to and coinciding with President Trump's election and inauguration. Last year, in the face of criticism, Sarsour apologized for failing to condemn anti-Semitism and Women's March co-chair Tamikah Mallory has refused to personally condemn the outspoken anti-Semite leader of the Nation of Islam, Louis Farrakhan.

The New York Times reported that neighbors of the suspects in the Jersey City kosher supermarket attack overheard them listening to recordings of Farrakhan.

"Many people have noted, as I will, that it is not a coincidence," noted Bruce, signaling out, "this relationship between — as an example, Linda Sarsour and Louis Farrakhan and the Women's March, you know, a big liberal event."

"Yet [Democrats] still are... taking the energy to instead of directly relating to the nature of what's happening in New York as a result of Democrat liberal rhetoric about the Jewish people and about Israel -- going through the energy to point the finger at Donald Trump," she argued.

"This is why there is no solution to this problem as long as the Democrats remain in charge," Bruce concluded. "Normally, you would sit back and do some reflection about what it is that we can do to change this, or what should we change in our own rhetoric and as opposed to condemning the president."