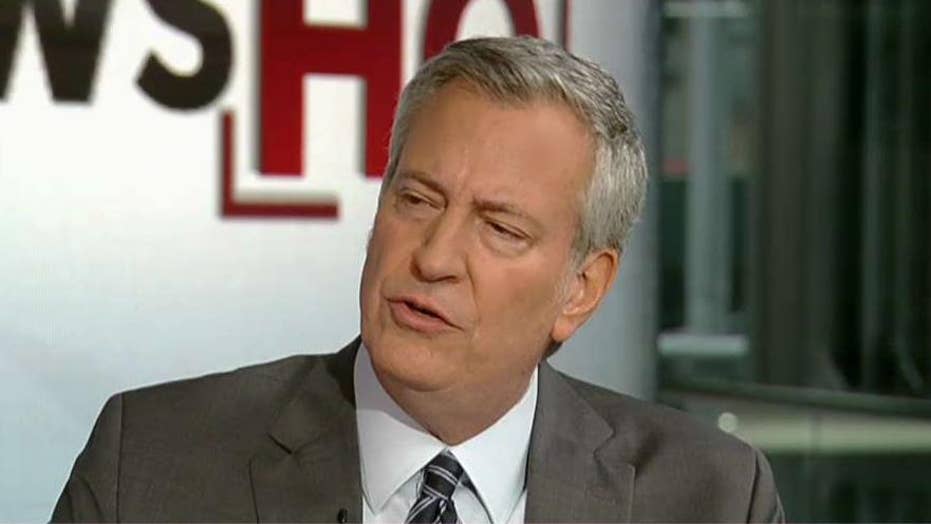 New York City Mayor Bill de Blasio blames an "atmosphere of hate" for the recent increase in anti-Semitic attacks in his city and the surrounding areas, but in a Fox News interview, he passed at least some of the blame to the nation's capital.

De Blasio spoke about the ongoing problem the day after five people were stabbed at a rabbi's house in nearby Rockland County during a Hanukkah celebration, and at least eight incidents took place in Brooklyn earlier this month.

"We are in a crisis right now," de Blasio said Sunday afternoon, adding, "What we're seeing is a growth of anti-Semitism in this country that is profoundly dangerous. It is happening in Europe as well."

When it comes to his city, however, de Blasio has taken criticism from those who believe he is not doing enough to prevent the violence, or properly recognizing the problem. He was blasted by conservatives earlier this year when he claimed that anti-Semitism was a right-wing threat - even as members of his party such as Reps. Rashida Tlaib, D-Mich., and Ilhan Omar, D-Minn., have been hit with accusations of anti-Semitism over their past remarks.

When host Ed Henry mentioned these concerns, specifically comments this morning from former Democratic New York Assemblyman Dov Hikind, de Blasio insisted, "when I think something is anti-Semitic, I say it, and I've said it about fellow Democrats."

The mayor then shifted, appearing to lay blame at the feet of President Trump's Republican administration.

"An atmosphere of hate has been developing in this country over the last few years. A lot of it is emanating from Washington and it's having an effect on all of us," he said.

When asked if he was blaming Trump, he said, "not just the president," but said "we need a different tone, starting in Washington ... that encourage this country to actually find some unity and some common ground" that he does not think the country has had in recent years.

The mayor then defended recent practices of releasing defendants --  including Tiffany Harris, who allegedly attacked three Jewish women -- which is part of the city's bail reform.

De Blasio claimed that most defendants are released after making bail, and if the only reason why a person is kept behind bars is because they could not afford bail, then that does not solve anything.

"We have a problem. We're not going to jail our way out of the problem," he claimed, pointing out that people should still face punishment if proven guilty.

"I want tough prosecution, I want consequences," he said.

Police said 37-year-old Grafton E. Thomas, of Greenwood, N.Y., on Saturday night entered the home of Rabbi Chaim Rottenberg in Monsey, a suburb north of New York City, during a Hanukkah celebration and stabbed five people, including the rabbi's son.

He pleaded not guilty on Sunday to 5 attempted murder charges and one burglary charge.