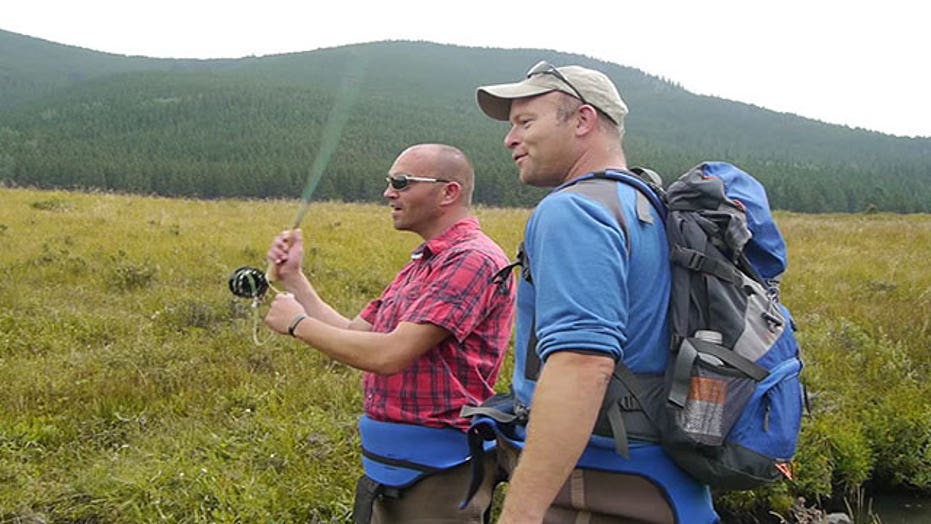 'Rogues on the Road'

BREWSTER, N.Y. – The idea was born nine years ago around a crackling campfire, as they roasted lobsters and steamed mussels they'd caught while kayaking through coastal Maine.

For friends Matt Frohman and Rich Marshall, the concept was simple – to return to the land they loved, and to travel the country, fishing, hunting and foraging for food. They'd live off of only what they caught, and then they'd challenge local chefs to cook up meals that could rival their own creations in taste and quality.

The benefits, they say, are plentiful – a healthier diet and slimmer waistline, a boost to the economy of local businesses and a return to the self-sufficiency and sustainability that the global economy has eroded.

"People want to know where their food comes from," Frohman said Tuesday while in picturesque Putnam County, N.Y., where the two showcased their farm-to-table concept at the Clocktower Grill in Brewster. "We live in a world where we take food for granted, and so much food is processed. In each community, there is a wealth of ingredients that can be gotten just from that community."

"If you’re eating directly from the land, you're cutting out all the herbicides, pesticides and fertilizers."

"You can go into a store in January and buy passion fruit from some exotic place, but the story of how that got to you affects many, many people – some positively, some negatively," he said. "Keeping it local reduces that carbon footprint. It also makes us appreciate our food."

From there, they traveled to states like New Hampshire, Florida, Vermont, Louisiana and Connecticut, hunting such game as wild duck and deer and cooking up, according to Frohman, what "some might consider weeds."

"If you’re eating directly from the land, you're cutting out all the herbicides, pesticides and fertilizers," Marshall said, as well as cutting out unnecessary sugar, salt and fat. He noted that free-range chicken, fish and eggs are among the healthiest foods the average consumer can buy. Marshall also said that eating local honey, for instance, helps combat pollen and bee-sting allergies.

At the Clocktower Grill, curious locals arrived to sample the food that was gathered by the two "rogues," and prepared by the restaurant's chef, Rich Parente. The robust, creative menu included elk chili, wild mushroom salad with quail eggs and crispy bacon, seared diver scallops over cheddar cheese grits and smoked Long Island duck with a wild lingonberry sauce.

While Frohman and Marshall acknowledge that shopping organic is costly for most Americans, they recommend that consumers "start out small" to minimize costs while still enjoying some of the benefits. They also warn would-be hunter-gatherers to research what's accessible and edible before foraging the land.

"Visit a farmer's market or go directly to your local farm and ask questions," Froham suggested. "In many communities, there are local foragers -- mushroom hunters -- who will take you out."

The pair maintains that they're part of a "food revolution" in the U.S., and that, with time, most Americans will return to a locally sourced, self-sufficient and healthier way of life. As the demand for organic products increases, the supply will increase and costs will decrease, the two said, citing the increasing affordability of hormone-free, grass-fed milk in recent years.

As for which of the more costly sustainable products consumers should consider purchasing, Froham suggests: "That's a conversation you have with your family and maybe you pick one item that is going to be a little more expensive but you're going to make that commitment to take that item. And by doing that, more and more get on board and that ends up driving the price down.

"We are in this kind of renaissance where people really want local ingredients," he said. "As long as we keep at it, and as the years move on, we're going to continue to see that movement grow."

Click here to watch the official "Rogues on the Road" pilot